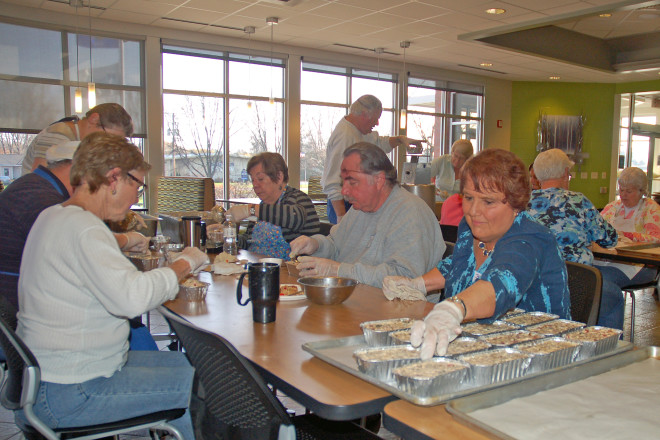 A group of volunteers preparing fruitcakes for the oven at NWTC. Photo by Jim Lundstrom.

For too long, the humble fruitcake has been the butt of holiday jokes. You’ve heard the jokes. What do you do with a fruitcake you don’t want? Use it as a doorstop, tree stand, bike helmet, re-gift it, etc. Or Johnny Carson’s line: “The worst gift is a fruitcake. There is only one fruitcake in the entire world, and people keep sending it to each other.” 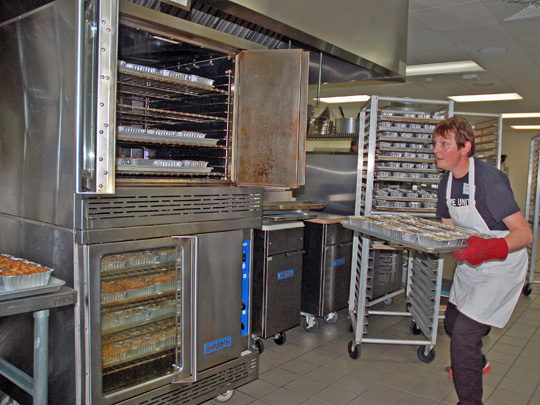 Grace Rossman puts the fruitcakes into the oven. Photo by Jim Lundstrom.

Well, that’s just not true. In fact, 700 delicious pounds of fruitcake was brought into this world just last week by a dedicated team of 21 volunteers working in the Northwest Technical College kitchen in Sturgeon Bay. These aren’t just any fruitcakes. These are fruitcakes on a mission.

“The fruitcakes generate nine to 10 percent of the revenue necessary to build a home,” said David Van Dyke, executive director of Door County Habitat for Humanity. “That’s what people have to think about. You’re not buying a product, you’re building a home.”

Cam Nielsen was one of the 21 returning volunteers to make and bake the Habitat fruitcakes on Nov. 5. She said she has been participating for seven or eight years, working her way up from portioning raisins and walnuts and washing dishes to filling the aluminum baking pans with the special fruitcake mixture.

“It’s pretty much the same crew every year,” she said. “That makes it easy, so everybody knows their way around. It’s an easy way to make money for Habitat. Like most nonprofits, Habitat is always looking for funds so we can build another house. This is an easy effort, and there’s a lot of camaraderie. We catch up once a year with what is happening in each other’s lives.” 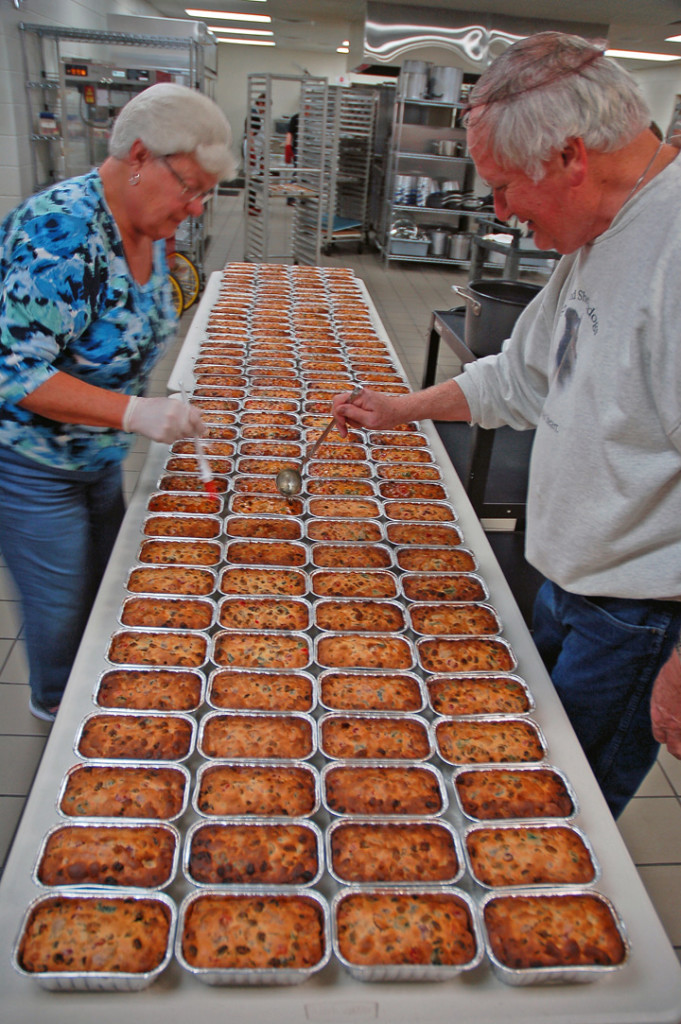 The fruitcake recipe comes from Franciscan nun Sr. Mary Louise Shramer, who used to serve on the Habitat board. She had experience selling fruitcakes as a fundraiser and suggested Habitat take it up. Overcoming the initial skepticism, fruitcakes have been helping to build homes in Door County since the mid-1990s.

“It’s become very important to us,” Van Dyke said, adding that in addition to generating revenue, it gets the Habitat logo out into the community.

He adds that the fruitcake bake began as a three-day affair, but they’ve streamlined it to less than two days, with prep work done the night before the bake.

In the kitchen, Grace Rossman mans the convection ovens.

“Baking is our bottleneck. Just not enough ovens,” she said.

The carefully measured one-pound cakes are baked for 30 to 40 minutes. “I just babysit them,” Rossman said.

Habitat has 35 vendor partners throughout the county that are now selling the fruitcakes. You can also buy them at the Habitat office and the ReStore. They are $15 each.

To find a vendor near you, visit the Habitat website, doorhabitat.org.

Anyone who would like to volunteer for future fruitcake bakes, call Habitat at 920.743.2869 or email [email protected].