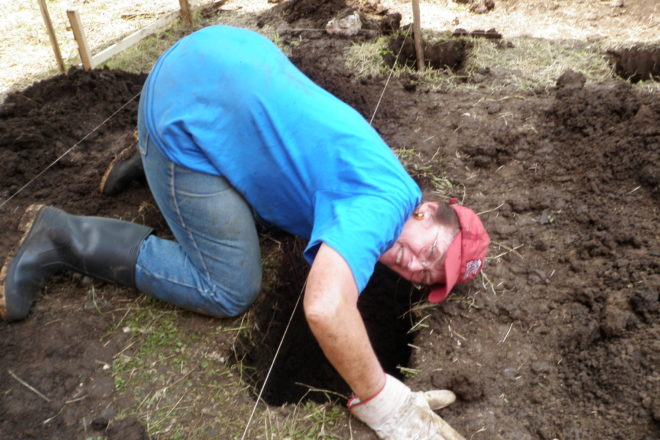 Polly Knudsen didn’t start life as a world traveler. Born in Milwaukee, she was in first grade when her family moved to Mt. Prospect, Ill. After high school, she was off to the University of Illinois, where she majored in home economics. Then she went home to Mt. Prospect to spend 43 years as teacher and counselor in District 214 before retiring in 2014, as well as spending time at the family vacation home on the Sturgeon Bay Ship Canal.

In 2001, Polly’s daughter, Kerry, and her husband were in the Peace Corps in Suriname, the former Dutch Guiana. “I wanted to see them,” Polly says, “but I wasn’t old enough to do elder hostel, and anyway, I really wanted to combine travel with volunteer work.”

That’s when she discovered Cross-Cultural Solutions, a 20-year old organization with a purpose that intrigued her: A volunteer trip abroad with Cross-Cultural Solutions will change you. Change the way you see other cultures. Maybe even change how you live your life. All while you change the lives of others for the better. Ultimately we’re changing the way volunteering is done, making it a safe, exciting adventure of a lifetime for people of all ages and walks of life. 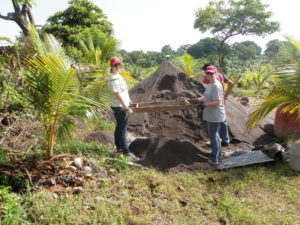 Polly signed up for five weeks in Peru, leaving her husband, Randy, at home with their three other children, two dogs and a cat. When Kerry had vacation days, she joined her mother for a hike to Machu Picchu and a flight in a tiny plane (“sort of like being in a canoe in the air”) over the amazing Nazca Lines, a series of ancient geoglyphs in the high desert 250 miles south of Lima, created by the Nazca culture between 500 BC and 500 AD. There are more than 70 designs of animals such as birds, fish, llamas, jaguars and monkeys, as well as trees and flowers. The largest figures are 660 feet across. The prehistoric people made them by removing the reddish pebbles on the desert floor to expose the whitish earth underneath. The area was designated as a UNESCO World Heritage Site in 1994.

This added adventure after the weeks of volunteer work became the pattern for all Polly’s future travels. In Peru, she talked with other members of her team who suggested Habitat for Humanity International/Global Village might be another organization she’d enjoy working with.

The next November, when Polly was back at school in her counseling job, younger daughter, Susan, came home from Carleton College for Thanksgiving vacation. She discovered that Polly had arranged for her and her dad, a recently retired English teacher, to participate in a Habitat project on the Vanuatu Islands an archipelago 1,090 miles east of northern Australia. “They flew to Australia on Thanksgiving Day,” Polly says, “spent three days there, two weeks helping with a build on Vanuatu, and three more days in Australia before flying home for Christmas.”

This was the Knudsen family’s first experience with Habitat, and they loved it. They felt especially fortunate to have been able to participate, because Habitat usually uses only Australian volunteers in that area.

“Well,” Polly thought, “if they can do it, I certainly can.”

When Kerry completed her assignment with the Peace Corps, she and Polly signed up for their first trip with Habitat, volunteering to help build a simple home in Guatemala. They had a great time on the 12-day project, and extra days were scheduled to absorb the culture of the country. Polly attended a cooking school (with take-home recipes) while Kerry joined a group that climbed a volcano and roasted marshmallows at the top. Polly also toured a chocolate museum that highlighted the entire process from cacao beans to luscious candies. (She notes that home economics teachers always enjoy learning about food in other cultures, including samples of chocolates.)

Polly got her turn with volcanoes later. Walking across the town square on Antigua, a colonial city in Guatemala, she looked up to see one of the three volcanoes ringing the town spewing lava. Next, she was off to another build in Honduras.

In 2015, Polly planned a trip to Nepal in June, but it was postponed until fall after the April 25 earthquake that caused widespread devastation and nearly 9,000 deaths. “It was an interesting trip, but very sad,” Polly recalls. “Just before our team arrived, the government changed the constitution in a way that caused a group of people with ties to India to feel discriminated against. With support from India, they blockaded the border through which supplies came in. The resulting fuel shortage caused restaurants to close and ‘non-essential’ flights to be cancelled.” Some people in her group had trouble getting out of the country, and a build Jimmy Carter was to take part in was cancelled. Polly’s planned flight over Mt. Everest was also a casualty of the blockade.

Polly’s next trip was to Ataco, El Salvador, where her group built two houses next door to one another for sisters. “The parish priest was so grateful for what we were doing that he came around to touch each of us and say thank you,” Polly recalls. “An elementary school was nearby, and the children liked to stop at the building site and practice their English. Some of the little boys decided to play hooky and stay with us all day until one of the mothers found out and put an end to it.”

The cultural activity in Ataco was a visit to a candy business owned by one of the families for whom a house was being built. In a room beside the garage, a man was using a machete to chop the husks off coconuts. Inside women with razor-sharp gadgets over their knuckles were shredding the coconut meat. The finished candy was packed into little plastic bags that were stapled onto a piece of cardboard attached to a stick that a man carried around town to sell. “It was good!” Polly says.

She also learned to make pupusas, corn tortillas stuffed with cheese, beans or pork and cooked on a griddle. El Salvador’s national dish, they are incredibly simple and inexpensive to make. Curtido, the accompanying slaw, is a combination of cabbage, carrots and onions in a vinegary, spicy brine. Traditional curtido is fermented, but a U.S. version is simpler, requiring just a couple of hours to lightly pickle. (Although the longer it sets, the better it will be.)

As a high school senior in 1966, Polly was an exchange student in Argentina. When she returned with Habitat in 2010, she was sad to find that, although Buenos Aires was still very cosmopolitan, country life hadn’t improved at all.

Perhaps the most interesting and definitely the most labor-intensive build Polly has been involved in was a two-story brick ecohouse in Poland. The bricks her team used had been made by the Canadian volunteers who preceded them, while those her group made would be used by the Irish team arriving next. The brick-making process required stomping water, straw and clay together in an old claw-footed bathtub (think Lucy and Ethel stomping grapes in a vat) then packing the mixture into forms to dry. Stomping duty was determined by whose feet fit into the two pairs of available boots. 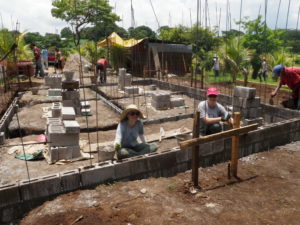 Polly’s 10th trip since 2008 was a return trip last summer to El Salvador. She feels a special tie to that country because the family of one of her favorite students left there years ago due to political unrest.

“Habitat is such a fine organization,” Polly says. “Volunteers who go on the trips pay for their flights, housing and food, as well as the building materials they use. The people who will receive the homes work with us, gaining sweat equity. As in the U.S., they also receive interest-free loans to pay back the mortgage over time. The interaction as we work with them is an added benefit. They are always so appreciative and amazed that people would come so far to help them out.”

Polly says that she has met great people on every trip, the food is always good and accommodations are always comfortable, whether they stay with local families or in small hotels that provide meals.

“It’s a wonderful way to learn about other cultures and experience different things,” she says. “Youth ages 16 or 17 can participate if accompanied by a parent or guardian. Those 18 and up can go on their own. It’s a great intergenerational program.”