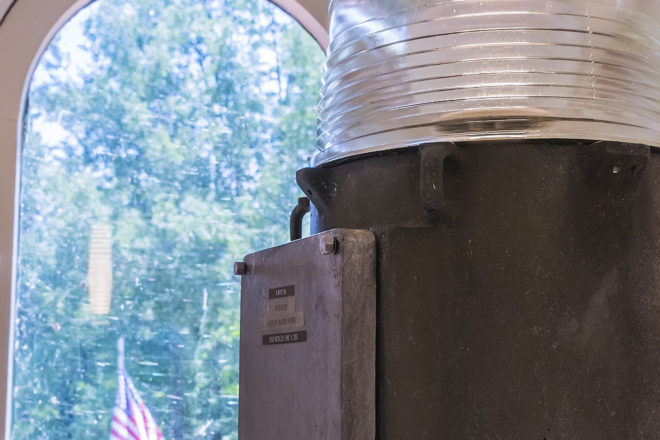 For the past 150 years, the Baileys Harbor Range Lights have signaled home to the peninsula’s mariners. But only a select few people have been able to call the upper Range Light their own home during the early years of the beacon’s history.

“They had a pretty good life compared to other people living on the peninsula,” said Sandy Miller, who, along with her husband, Ed, is recognized as one of the area’s lighthouse experts.

We know most about Henry Gattie, lighthouse keeper at the Range Lights and Baileys Harbor’s most eligible bachelor at the turn of the 20th century.

“Henry was a popular guy,” said Ed Miller, who portrays Gattie in tours of the Range Lights. “He was popular with the ladies. He had a good job, a good house.” 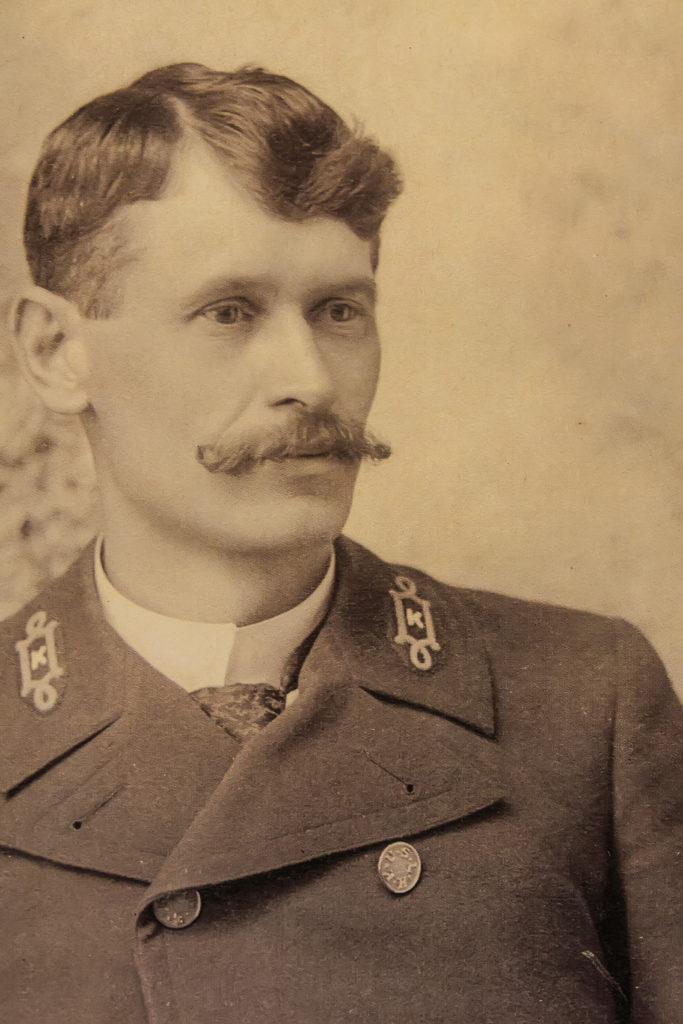 Henry Gattie, lighthouse keeper at the Range Lights and Baileys Harbor’s most eligible bachelor at the turn of the 20th century.

That house was the approximately 2,200-square-foot, two bedroom space below the upper Range Light. Built and operated for decades by the federal government, it was probably one of the best homes on the peninsula at the time.

“If you think back to the 1800s, most people are farmers up here. They’re living in log homes,” said Sandy. “This guy is living a mile north of Baileys Harbor, he’s got this beautiful, two-story home. He’s got two, maybe three wood stoves in there, nice glass windows in the house. It’s pretty fancy stuff.”

The domestic role of Gattie and the seven other lighthouse keepers that occupied the home between the time it was built in 1869 and when it was electrified in 1923, included maintenance of the building and grounds. After all, this was a federal building, and protectors of the Great Lakes vessels could not be seen living in a ramshackle home.

“If people come and they want to see the lighthouse, it’s open for touring,” Sandy said. “That’s one of the reasons the house had to be in good shape. It had to be presentable and they were given paint every year and they were required to paint inside and outside to keep it looking good.”

The Lighthouse Service (which merged with the Coast Guard in 1939) kicked in to help with upkeep. The government sent out crews for projects such as roofing or digging a well. The agency paid a good salary of around $600 a year in addition to providing a few hundred pounds of pork, beef, flour, rice, coffee, sugar, beans, potatoes and vinegar.

Lighthouse keepers needed a hand every once in a while. They had a tough job.

“The first fuel was lard, so if the keeper was lucky it would last three hours a fill,” said Ed, adding that the smoke from lard, and later kerosene, meant keepers also had to polish the glass every day.

That was double the responsibility for the upper and lower Range Light, and chances are the keeper didn’t sleep through the night for the entire shipping season thanks to the three hour refills.

But there was respite during the winter months. As soon as the lake froze over and ships wintered in safe harbors, the lighthouse keeper was free to leave.

When the Range Lights were electrified and automated in 1923, there was no longer a need to house a keeper on site. It only took seven years before another group, the Baileys Harbor Immanuel Lutheran Church, thought of a use for the empty home as a parsonage, or house for the minister.

“The pastors were responsible for caring for the lights in both the upper and lower range lights, and undoubtedly were the only combination minister-lighthouse keepers on the entire Great Lakes,” the church wrote in its 100th anniversary history.

The Lighthouse Service, and later the Coast Guard, were pretty good landlords. They liked having someone occupying the lights in case something happened, and they charged rent of only one dollar per year.

Helen Girod, the wife of Reverend Robert Girod, lived there with her husband for nine years beginning in 1944. She died in 2011, but recounted her time at the Range Lights in a 2008 newsletter for The Ridges Sanctuary.

“The Upper Range Light was very stark and dark inside with its grey walls and the large trees darkening the windows,” Girod wrote.

They got permission from the Coast Guard to put up wallpaper on walls that had dozens of coats of paint. In winter, the wood-burning stove and “cranky oil burner” didn’t help much, as spilled water would still freeze on the kitchen floor.

Despite living there because of the reverend’s church duties, the Girods could not escape some of the lighthouse keeper’s duties, which had been part of the property for nearly 100 years.

“Oh, yes, the Coast Guard kept track of us,” Girod wrote. “And sometimes they called from Sturgeon Bay to have us walk down the path to the lakeshore and see if the Cana Island light was on.”

After the Girods, some familiar names occupied the Range Lights.

“It’s an adventure living there,” naturalist Charlotte Lukes recalled. She moved into the Range Light in 1972, shortly after she married the late Roy Lukes. The couple lived there for 10 years, battling floods, fires and freezing temperatures. 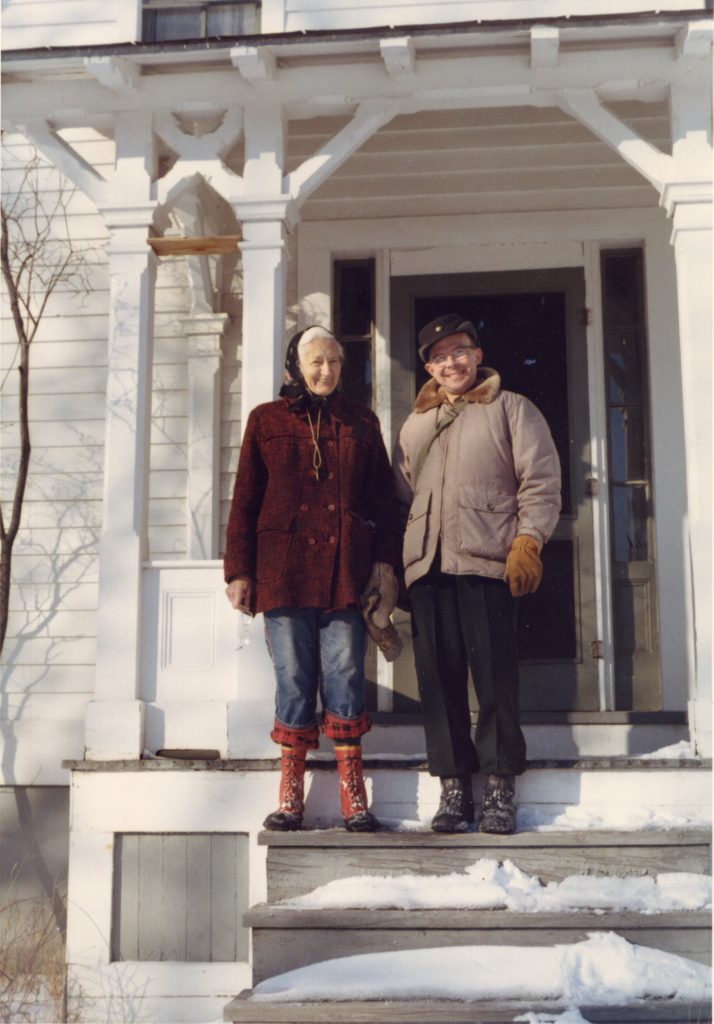 Emma Toft and Roy Lukes on the day she handed him the keys to the Upper Range Light in 1968. Submitted.

“Roy would always tell people that I inserted into the marriage contract that the house have a furnace put in,” Lukes said.

By that time, the government wasn’t doing much in the way of upkeep for its tenants. Roy needed permission to put new windows in and the new residents were on their own to manage a cracked toilet bowl, faulty electrical wiring and installation of a new carpet.

Peninsula State Park Naturalist Kathleen Harris didn’t mind the lack of luxury when she moved into the Range Light in 1990.

“I absolutely loved it,” Harris said. “It was fun to live where you could still see echoes of the past.”

Harris’s son Brendan was born while she lived in the Range Light. Fittingly, some cultures consider the origin of the name Brendan to mean “by the beacon.” 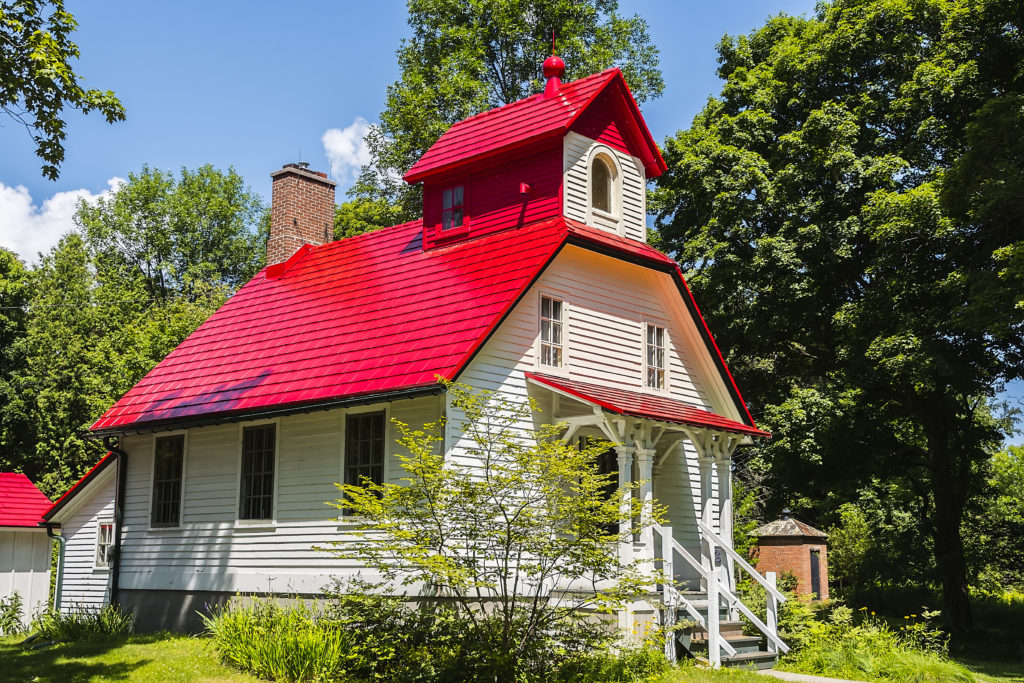 The Upper Range Light was restored in 2018. Photo by Len Villano.

But in many ways the Range Light could no longer function as a house while it increasingly served the greater purpose of helping Door County residents and visitors understand the area’s maritime history. Lukes recalls visitors knocking on the doors at all hours of the day. Harris remembers meetings of The Ridges Sanctuary board being held in the building because it was the only meeting space on the property.

“Living there, it basically was a public building,” Lukes said.

These days it truly is a public building that hosts classes and Ed Miller’s lighthouse tours. Visitors can glimpse what it was like to live beneath the light, either a century ago or just a few decades ago.

When they moved in, the Range Light’s residents thought little more of the building as a convenient place to live while they worked nearby. But over time, either through sharing the walls of historic lighthouse keepers or waking up to a visitor knocking on the door asking for a tour, the magic of The Ridges seeped in.