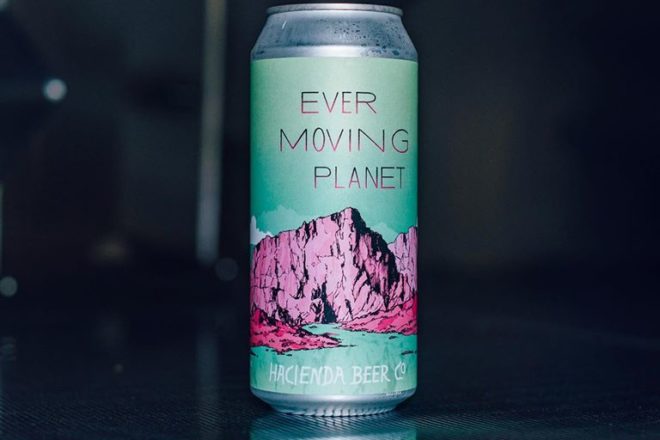 “Our first iteration of Ever-Moving Planet was released back in March and featured spelt – a grain very similar to wheat, but with a particularly high protein content to help boost the body and mouthfeel of the beer,” said Matt Sampson, Hacienda’s head of fermentation, branding and marketing.

“The second iteration of Ever-Moving Planet, which we are releasing on Aug. 7, features oats,” he said. “We use oats in almost all of our hazy/juicy IPAs, but for this beer, we wanted to highlight the wide range of different types of oats that can be used in beer. We used flaked oats – unmalted grain, helps provide creaminess; malted oats – which we typically use; and golden naked oats – provides a grainy sweetness and a golden hue to the beer. Most of these types of oats are historically used in some types of dark beers – stouts or nut brown ales, for example – but for the hazy/juicy IPA style, they fit perfectly.”

Hacienda plans to release a new addition to the series three or four times per year, to feature four grains – spelt and oats being the first two – and then to begin rebrewing them. The batch size for each beer is 15 barrels (465 gallons), which is then split between cans and draft.

“We usually end up canning around 50-60 cases per batch, and then divide them between our Baileys Harbor and Milwaukee locations,” Sampson said. “The cans end up selling pretty fast – usually not lasting more than a couple weekends in our taprooms.

“Anyone who enjoys IPA – and more specifically the juicier, hazier, less bitter IPAs that we have been releasing – would love the Ever-Moving Planet series. These beers are also more approachable than traditional IPAs as they are less bitter and have more fruit-forward flavor from the hops and yeast profile.”