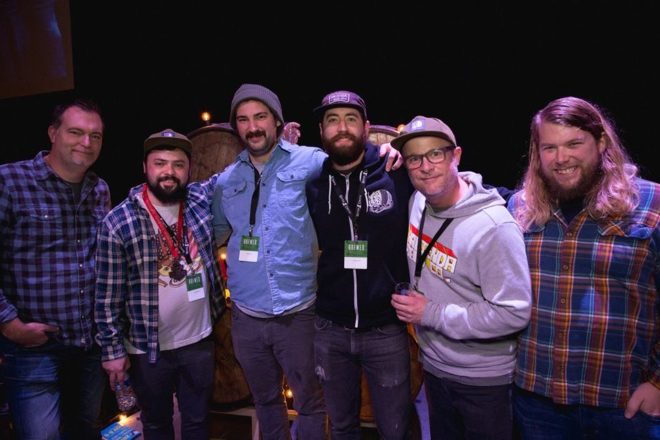 The Festival of Wood and Barrel-Aged Beer (FoBAB) is considered to be the largest and most prestigious festival of its kind, where breweries from all over the country – and beyond – compete for medals in a variety of categories. This year Hacienda Brewing Co. earned a silver medal, which is big news in the brewing world.

“It was a really big deal. They are totally geeked out in the back,” said Angie McMahon, general manager at Door County Brewing Co. Taproom & Music Hall, referring to the excitement of the local brewery’s brewing staff.

This year, competition came from 229 breweries in three countries and 28 states. All beers entered must be aged in wood – typically barrels or larger wooden vessels such as foeders – and each brewery may enter two beers per brewing license. Hacienda Brewing Co. enter L’hiver Blend 2 in the Wild Beer/Brett category and There Is No Other Way in the Wild Beer (Acidic) Sours category.

FoBAB took place in Chicago on Nov. 8-9, with three tasting sessions accessible by ticketed entry. Prior to the public tasting sessions, a panel of industry leaders and certified judges evaluated all beer, cider, mead, and perry, awarding gold, silver and bronze medals in 12 style categories as well as Best in Show honors.

L’hiver Blend 2 won a silver medal in its category. The Wild Beer/Brett category comprises beers that were fermented at least in part by Brettanomyces, a wild yeast strain. The Brettanomyces fermentation profile typically produces beers that are funky, fruity and sometimes slightly acidic.

L’hiver Blend 2 is the second iteration of Hacienda’s winter seasonal saison, marking its return to its series of saisons in 2020 (after skipping spring, summer and fall this past year).

This blend – composed of a foeder-fermented, mixed-culture saison – puts to use a couple of the tastiest barrels from the company’s oak cellar. It was conditioned on spruce tips and juniper berries that were foraged just a couple of miles from the Baileys Harbor brewery; then its profile was rounded with dried orange zest.

The award-winning brew will be released to the public in bottles and on draft Nov. 29, 11 am, at both the Door County and Milwaukee taprooms.

The Door County Brewing Co. and Hacienda Brewing Co. brewery and taproom are open year-round at 8099 Hwy 57 in Baileys Harbor. Hacienda’s second taproom, 2018 E. North Ave. in Milwaukee, opened in May 2019. Learn more about all the winning beers at fobab.com.