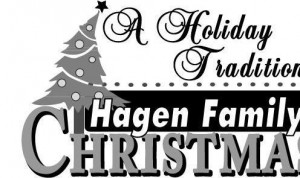 The Hagen Family returns to Third Avenue Playhouse for their annual Christmas concert on Saturday, December 15 at 7:30 pm.

The harmonies, humorous presentation, wide variety of material and family values of this multi-generational group have made the Hagens favorites throughout the county and the state. Longtime supporters of the Playhouse, their December concert has become a holiday tradition at TAP and in Sturgeon Bay.

Begun by patriarch Jack Hagen, the legacy of music has been continued by Julian Hagen, his sisters Linda Swan and Leila Nehlsen and their families.

Gifted performers in their own right, the youngest generation of Hagens have already accumulated some impressive credentials. Sally Swan was one of the ten finalists in the Wisconsin/Illinois division of the “Nashville Star Competition” in 2002. Daniel Swan was one of three scholarship winners for music in the Wisconsin Music Association’s annual competition in 2003. Rachel and Janelle Swan have performed in many school and community performing arts events. Jack and Marisa Nehlsen are veterans of Island Players theater productions. Marisa also sings in the Faithful Friends, a teenage vocal group on Washington Island.

“At TAP, we say that it just isn’t Christmas until the Hagen Family sings,” says Judy Drew, TAP’s Executive Director.

“This show always sells out,” notes Drew, “so we urge people to get their tickets in advance.”

Tickets for the Hagen Family Christmas Show are available at the theater box office, 239 N. Third Avenue, Sturgeon Bay, 920.743.1760. Box office hours are 10 am – 3 pm, Monday through Friday and one hour prior to performances. Tickets are also on sale at the Dancing Bear, 13 N. Third Avenue and on-line at http://www.ThirdAvenuePlayhouse.com. Ticket prices are $12 for adults, $10 for seniors and students and $7 for children under 12.