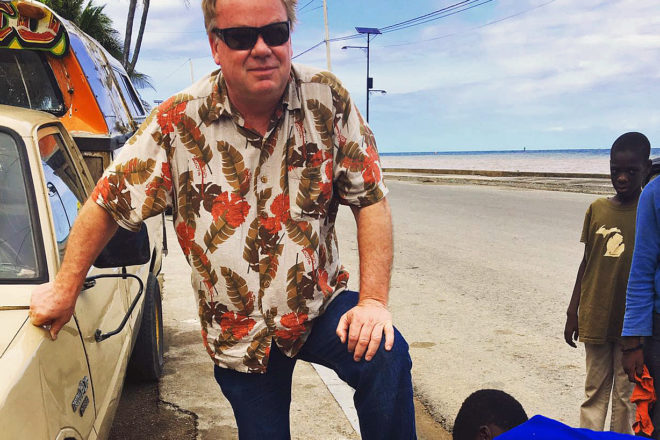 Say the word “Haiti” to most people and they will conjure up images in their mind of abject poverty, political upheaval and natural disaster.

But not Dr. Marc Binard, a hospitalist at the Door County Medical Center who has a 46-year love affair with the island nation.

Binard’s relationship with Haiti began in 1971 when he was 12 years old.

“My dad [Dr. Joseph Binard] was a urologist in Manitowoc and he had connections to Haiti,” Binard explained. “He’d gone there on his honeymoon in 1958. In 1971 he had the urge for some missionary medical work. He got in touch with some Belgian priests he had met on his honeymoon.”

At that time, a young Belgian missionary had just gone to a village called Marmelade.

“No doctor had ever been up there. They had just cleared a road but, no car had ever been up there,” he said. “It was two days from Port-au-Prince. We went with funding from the Manitowoc Rotary Club. We went up to that village and basically started a clinic. We brought an engineer from Manitowoc Crane. We brought water supply to the village. That was my start and I was instantly smitten.”

That was a life-defining trip for the 12-year-old. 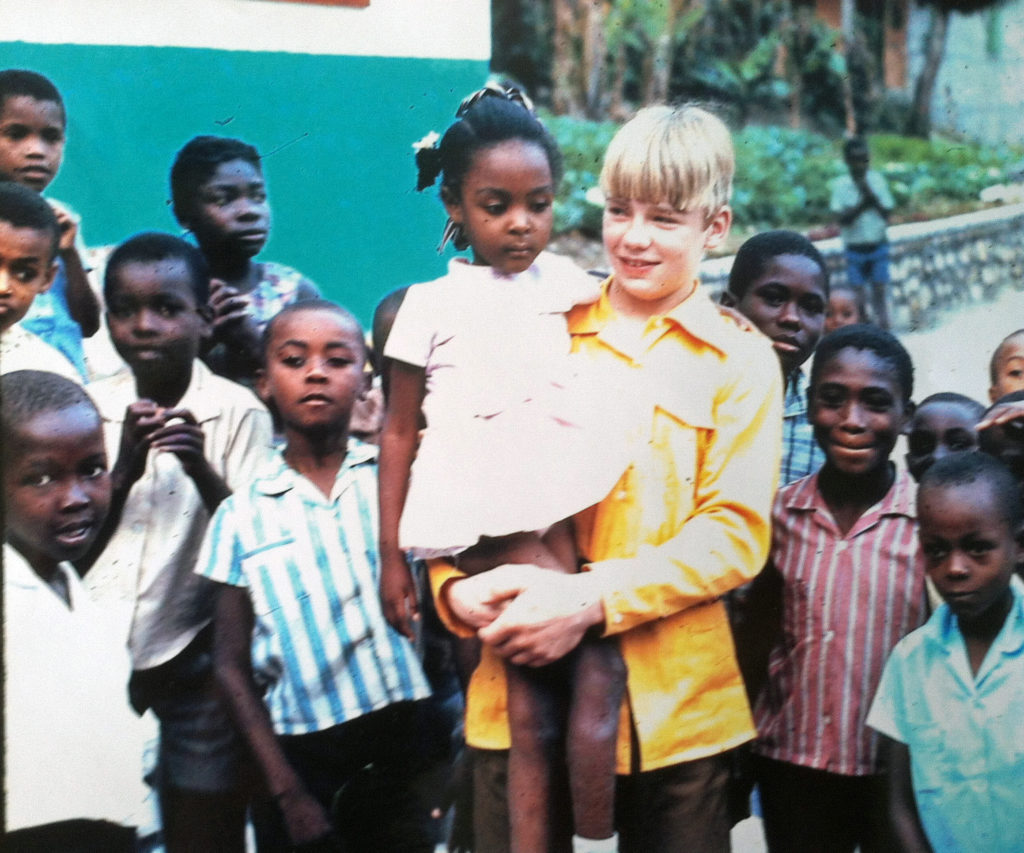 The elder Binard eventually became a Haitian consul and focused his work in the capital, Port-au-Prince. His son – only 16 years old – began making the trips to the village on his own.

“I went to give vaccinations,” he said. “People would bring me sick babies and machete injuries, and I was a 16-year-old kid just giving vaccinations. They didn’t want to hear you weren’t a doctor.”

He said several hundred people would gather when he arrived in the village to give shots.

“Because there’s not much going on up in Marmelade,” he said.

“It was scary,” he admits, but he did what he was there for, administering shots and attending to whatever else was thrown at him.

“One guy came with a machete injury,” he said. “I knew how to stitch. I grew up on a farm in Manitowoc and my dad taught me how to suture animals. But I knew you didn’t want to suture an old wound, so I found a cream. I found out later it was a burn cream. All the labels were in German or French. I smeared this burn cream on the wound and wrapped it. He came back four days later and it actually looked great.”

Heady stuff for any 16-year-old, but it only helped young Binard follow a path he now clearly saw before himself.

“To this day I feel an obligation to Haiti and the people of Haiti, because I was a bit of a troublemaker as a kid, and Haiti kind of kept me on track of saying your goal is be a doctor and be a doctor in Haiti, or at least in the Caribbean, because of the experience. It was just, wow!”

The idea of practicing medicine on Haiti became the carrot that drove him on through med school, internship and residency.

“I always had that when I went to college and medical school. I kept going on a regular basis to Haiti,” he said.

But, as often happens, the best laid plans…

After his internship and residency, Binard had a public health commitment to take a rural posting.

“It was supposed to be in the Caribbean but they assigned me to a small town in South Carolina,” he said. “The goal was always to try to get back to the islands.”

But that was the late 1980s, a difficult time in Haiti’s political history, with the 1986 overthrow of corrupt President Jean-Claude “Baby Doc” Duvalier.

“Haiti at that point had gotten pretty unstable,” Binard said. “Baby Doc left and there were a lot of coup d’états. It wasn’t the time to go to Haiti to set up shop. I still went but I ended up getting diverted.” 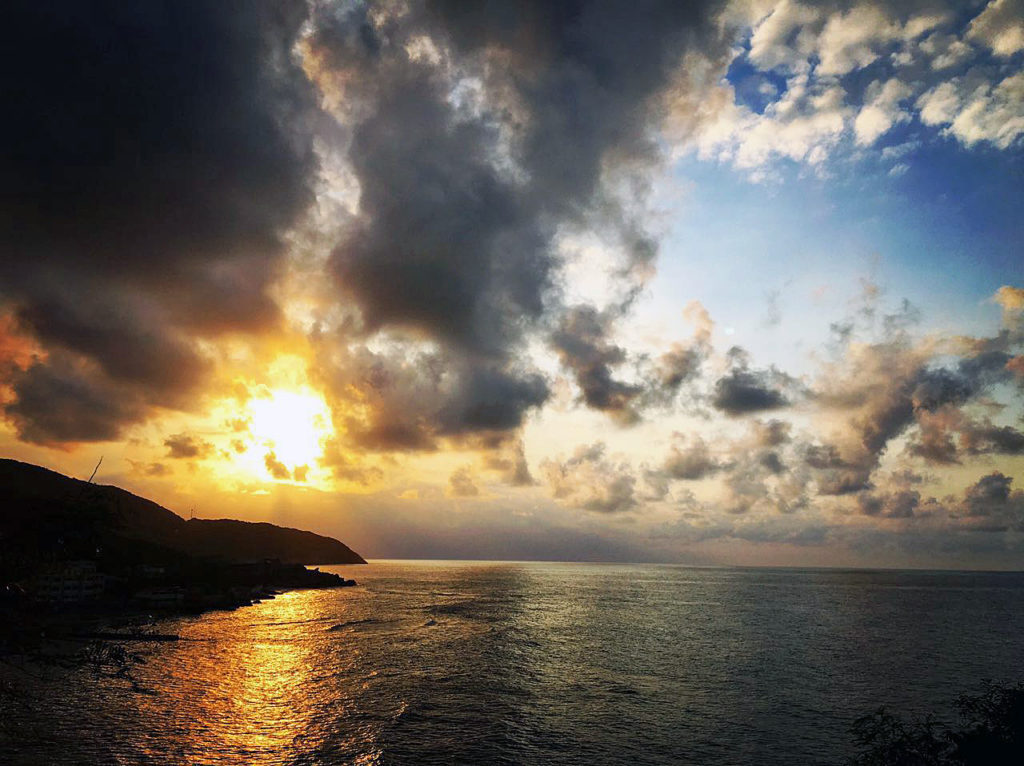 One of Binard’s hobbies is sailing. While in South Carolina, he bought a boat that was from the Bahamas.

“I ended up sailing from Charleston to the out islands of the Bahamas,” he said.

Once there, he ran into a college friend. As orderlies, the pair of them used to joke that they would both practice in the Caribbean.

Yes, the fickle finger of fate had thrown the two together on Binard’s voyage to the Bahamas. His friend operated a clinic, and Binard agreed to come down and help him one week a month.

“The first day I worked in his office, I noticed there were Haitian people,” he said. “I didn’t know the population there is about 30 percent Haitian. It suddenly clicked. This is my Haitian practice but it’s in the Bahamas, in the out islands. After the first day, I said this is my dream. I went back to South Carolina and turned in my resignation. So I ended up in the Bahamas with a big Haitian practice and I started going to Haiti more and more. I was there in the out islands 11 years full-time, with no plans on ever coming back to the Untied States. I certainly never thought of coming back to Wisconsin.”

But when his father semi-retired and bought a farm in Brussels, Binard visited and it got him thinking, “You know, it would be nice to have a place out of the hurricane belt. I collect cars and books and wanted something out of the hurricane belt. I ended up buying an old Victorian home in Sturgeon Bay, basically just as a refuse. People found out I was a hospitalist and the job offers came out.”

He first took a job with Aurora Health Care as director of their hospital in Two Rivers and then as a hospitalist at Aurora Bay Care before joining the Door County Medical Center, where he is in his third year. 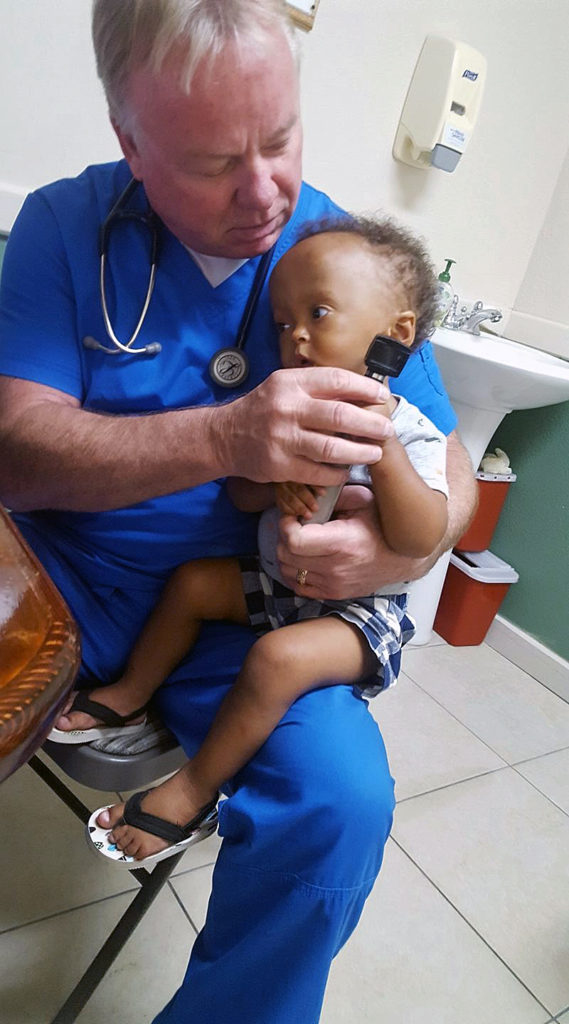 As a hospitalist, Binard works one week and has a week off.

“I work a week here then I do a week in the Bahamas, then I do a week here and at the end of the month I do a week in Haiti,” he said. “I have some property there and we’re slowly working on developing that house. It’s a good life. It’s challenging. You appreciate things more when you see the big difference. Here I have all the technology, all the goodies. I can order consults and MRIs and CTs and transfers, and then I got to Abaco and it’s very rudimentary. Ultrasound is twice a month. Lab tests take three or four days.

“Then you go to Haiti and it’s a whole other level,” he said. “You have no meds, no capability for getting people transferred.”

Despite those obstacles, Binard said even after 46 years of experience on Haiti, each time he leaves feeling uplifted by the spirit of the people.

“Haitian people don’t forget,” he said. “In cultures where there’s not as much materialism, relationships are much more important. People aren’t worried about a new house or new vehicle; it’s all about interactions and relationships, and they don’t forget, for better or worse.

“People always say, ‘Wow, I admire you, the sacrifice you make going to Haiti,’” Binard laughs. “There is zero sacrifice. I don’t sit here thinking how much I’m going to suffer. I love it. What’s not understood, Haiti is one of the prettiest countries in the Caribbean. The natural beauty is amazing, the beaches, the mountains. The culture, the music, the food. And then you have the people. The one-on-one interactions you have absolutely make the country so special. You would expect at that level of poverty people would have an attitude and look at you as a rich foreigner. It’s very uplifting.”

And while he never thought he would return to the states, Binard said he is also happy at Door County Medical Center.

Instead of donating money to an agency that may or may not directly benefit the people of Haiti, Dr. Marc Binard suggests you take a vacation there.

“There’s all kinds of ways to help Haiti,” he said. “Forewarned, there’s all kinds of scams. I’ve been scammed. Charity attracts good people and bad people. If people want to help, the best thing to do is go, stay in a hotel, go out to dinner, move a little money around.”

He recalls after the 2010 earthquake, people were going down to help, but they were staying and eating at missionary compounds.

“All of the revenue was staying in those small enclaves,” he said. “You’d go to restaurants, no one there. Hotels laying people off. When I want to go out to dinner, I tip my waiter 5 or 10 bucks. That’s huge. He’s sending his kids to school for a month on that. When we go out to dinner, there are a lot of street kids. Get a to-go box for those hungry kids in the street. I’ll get a pizza before I leave the restaurant. There’s usually four or five kids in the street. Here you go. It’s small little measures.

“I’ll count on some trips just how many people I’ve touched in one day – a waiter, the taxi driver, one day you’ll have 15 people you’ve helped out. It’s not in a dependent way. They are performing a service. They have the pride that I’m doing my job and I’m making money at it. You’re not there on a ‘poorism’ tour, as I call it. You love their culture, their music, their food, and you’re engaging in it. You’ve got a great country here. That gives them a boost of self-confidence.”