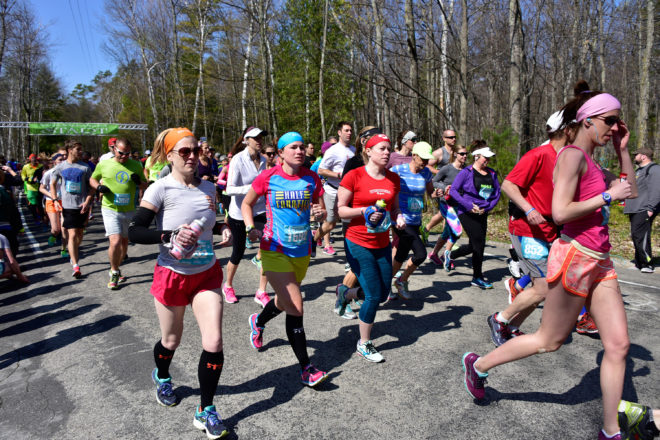 A lot can happen in 10 years. In the case of the Door County Half Marathon, an idea cooked up with some buddies over morning coffee at Al Johnson’s has turned into one of the premier running events in the region. But the change has not been limited to increasing participants and a bigger finish line party. The event’s pull has drawn the entire Door County community into its orbit, promoting the culture of a healthy lifestyle that wasn’t there before.

When talking to Digger DeGroot of the Fish Creek Visitor Center for a Peninsula Pulse story in the winter of 2016, he told me that the biggest change in the county has been the interest in silent sports.

“In the ’70s and ’60s if you were going to go home and ride your bike people wanted to know what was wrong with you,” said DeGroot. “You’re supposed to go out all night and party and then lay on the beach. So that’s changed.”

The Door County Half Marathon has now been at the center of that change for a decade.

“This was the first time I ever witnessed the community really getting on board with an event like this,” said Matt Luders, Business Health and Wellness Executive at Door County Medical Center and former executive eirector of the Northern Door YMCA. “This was something that started based on this grassroots community effort.”

While at the YMCA, Luders saw a wellness community grow in space that wasn’t there before. The race organizers had created a hometown event in one of Door County’s most idyllic locations and residents jumped at the chance to support and participate. Meanwhile, the community shifted toward health, wellness and performance, forging new friendships along the way.

“At that point in time Bill Wegehoff was doing training classes at the Y to get people ready for the half marathon,” said Luders of the first few years of the event. “We had speakers coming in once a week to talk about preparing for a half marathon, what to eat, how to hydrate yourself, doing all of that.

“I thought it was great because it had so much collaboration from so many different people in the community and it just spilled over into the Y, into the school, into coffee shops,” he added.

At Door County Medical Center, there are small groups that form outside of Luders’ office window after work.

“The half marathon definitely without question gets the most hospital involvement of all the events,” said Luders. “It formed relationships here at the hospital…. They can be fighting during meetings during the day but then they lace up their shoes and they’re going for a run together.”

In the end, the event created a running culture, where other races might spend their time searching for the right market before putting up a start line. It just took a group of hardworking locals who can see potential beyond what’s happening today and 13.1 miles of Door County’s most beautiful landscape. After that, the community came running.