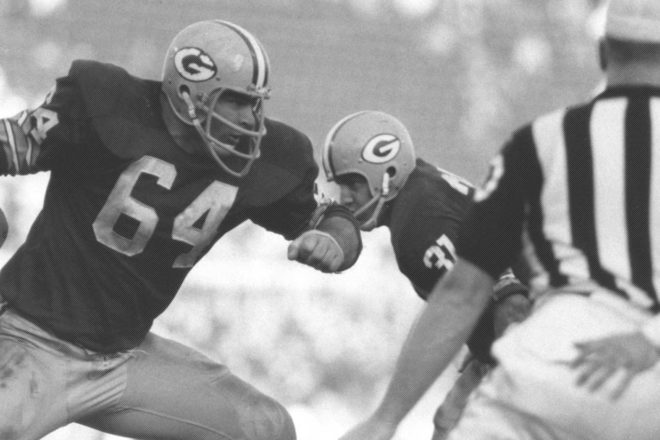 No. 64 Jerry Kramer in action. He spent a decade with the Green Bay Packers, 1958-68. Photo courtesy of jerrykramer.com.

The newest Green Bay Packers player to get the call from the Pro Football Hall of Fame has long been a hall of famer to one local organization.

Jerry Kramer, the Packers legend who led the way for Bart Starr to sneak into the end zone to win the famous Ice Bowl in 1967, is a valued contributor to the Boys & Girls Club of Door County. Since 2011, Kramer has been a regular attendee at the Door County Boy and Girls Club’s annual celebrity golf outing at Horseshoe Bay Golf Club.

Dave Resch, co-chair and creator of the local celebrity golf outing, expressed his gratitude for Kramer’s appearances at the event. He credits him with drawing other NFL luminaries including Zeke Bratkowski, Marv Fleming, and fellow Hall of Famer Dave Robinson to the event.

“Jerry was very instrumental in bringing those Packers in,” Resch said. “He has been supporting us every year and has been a big draw.”

Resch and co-chair Willie Schartner were introduced to Kramer at a fundraiser for My Brother’s Keeper, a nonprofit organization headed by former Packers fullback Harry Sydney, another regular participant in the golf outing.

“A group of us went down to a fundraiser in Green Bay for My Brother’s Keeper,” Resch said. “I asked Jerry if he played golf and he said, ‘I will come up to your golf outing with Doug Hart if you’ll take us out fishing.’ I said, ‘Well, I can arrange for that.’”

Kramer, who resides in Idaho, and his fellow celebrity attendees pay their own way to the event. They also don’t charge an appearance fee. “That’s several thousand dollars that can be used to further support the club,” Resch said.

Kramer is the 13th member of the Lombardi-era Packers to make the Hall of Fame, and the 25th Packers player overall, second only to the Chicago Bears with 28.

“I was thrilled to hear that the long-overdue honor finally was bestowed on Jerry after all these years,” Resch said upon hearing the news of Kramer being selected. “He was not only one of the greatest guards in the NFL, but he is also one of the kindest and classiest guys I know. I am honored and humbled to know Jerry and can’t thank him enough for what he has done for the Boys & Girls Club of Door County.”

Kramer will come back to Door County for the outing again this year, scheduled for June 12.

According to Resch, last year’s event raised $125,000 for the organization, bringing the eight-year total to $525,000. He said between 180 and 200 students come into the club after school. The club provides healthy snacks for children and includes areas for homework help, art, music and science.