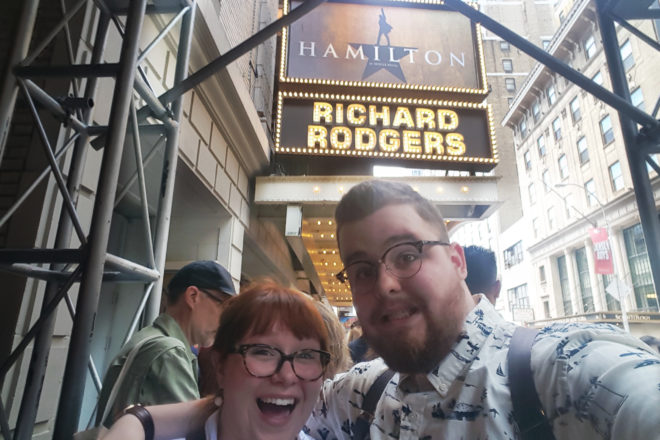 Andrew and Victoria Kleidon-Linstrom in New York on their honeymoon in 2016.

After listening to the original Broadway cast recording for more than half a year in 2016, my wife and I stood outside the Richard Rodgers Theater in New York, still in shock that I had two tickets stowed away in my breast pocket to see what we considered to be the greatest musical of our generation. Two tickets that weren’t quite priceless, but nearly so. Two tickets that people had been sitting on the sidewalk for more than a week to get a chance at.

Two tickets to see the original cast of Hamilton.

The day before was a special day because it was the day when the New York City production was filmed. It was a recording that cost $75 million – more than any other live theater recording. It was also a nerve-wracking day for the two of us. We had bought our tickets seven months in advance, knowing full well that final performances were coming for many of the founding members of the cast, Lin-Manuel Miranda included. We were seeing the performance directly after the taping, so we knew there was a high chance that understudies would go on to give the principals time to recover.

We knew the show would be spectacular regardless of who was in each role, but when we walked through the theater doors, looked at the cast board and saw that every single leading role was being played by the original cast member, we knew we were in for one of the greatest nights of theater of our young lives.

And this weekend, everyone can experience that same production on Disney+.

It’s wild to think that it’s been four years since that day. We knew Hamilton would be put in a vault and stored for a long time before it would get released. We figured it would be a major cinematic event, given the cost to film the show, but I don’t think I ever thought it would debut exclusively on a streaming platform. Disney is really flexing its muscles here by adding it to its streaming library. Yeah, Netflix has Tiger King, but the Mouse got Hamilton.

If you haven’t seen it, I encourage you to check it out. Yes, everyone. This musical is the perfect piece, even for your dad who “doesn’t like musicals.” History buffs have a rich narrative that puts a new spin on the birth of America. Hip-hop fans have music dripping with influences such as Jay-Z and Destiny’s Child, tied in to tried-and-true musical theater standards and flavored with late-1700s colonial stylings. If you’re as big on theater as I am, you’ve got something that innovates what a musical can be – both in the pages of the script and on the stage – with a story about 1770s America performed by an ensemble that looks like America looks today.

Because the world’s been turned upside down and we’re not going to be enjoying large fireworks displays this year, I think the perfect way to celebrate America’s independence is with a story of immigrants getting the job done and not throwing away our shot.