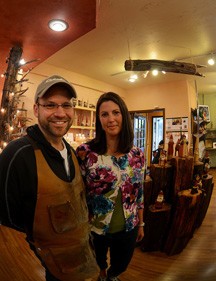 Erik Rinkleff’s carved characters are anything but ordinary. Rustic Fish, located at The Shops of Green Gables in Ephraim, serves as a working studio and gallery for Rinkleff, who sat perched on his stool in the corner behind the register as people came in and out, admiring and buying, his fabulous hand-carved Santas.

“When I started to carve it was often a holiday present, so my figurines were Santas or Snowmen,” Rinkleff said. “I have also done farmers, fishermen, and this year I am doing some Vikings. Not everyone likes the Santa or snowmen…or maybe they have too many. It’s nice to have something a little different.”

Wood shavings and scraps littered his little workshop corner, where one of Rinkleff’s newest characters, a goofily grinning Viking, waited to be painted. He carves a variety of characters, though his Santas – stocky, smiling, blue and red robed – get the most spotlight in the gallery.

“Hand tools are quiet, methodical, and meditative. If you introduce a power carver there’s dust and noise. The thing I like about carving is the quiet and peace and using my hands,” Rinkleff said. 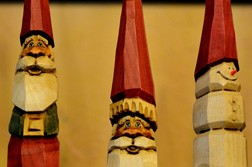 Looking at Rinkleff’s pieces, it was easy to notice some similarities. Many of the characters have exaggerated characteristics – like big feet and a big nose. The big feet, Rinkleff said, are rooted in practicality. That way the figurine has a firm base and won’t fall over on a person’s mantle.

“What tends to happen is that all the extremities are exaggerated – cartoons are like that, too. It’s the whole whimsical nature of doing it,” Rinkleff said.

Though, Rinkleff pointed out, there are many carvers who feel strongly about the difference between cartoons and these characters. Indeed, these figurines have a depth not seen in most cartoon characters.

“The gnomes can have something [deeper] while still being humorous…something that will make people smile when they look at them,” he explained. “The noses are big and the eyes have a bit of a twinkle. Some of it I can do, some of it sort of happens. That’s the magic of it.”

Rinkleff’s technique, known as the Scandinavian Flat Plane style of carving, thrives on rough edges. Traditionally, people carved using only a simple knife. With no tools for rounding out the edges, they used the bold strokes of the knife to their advantage. 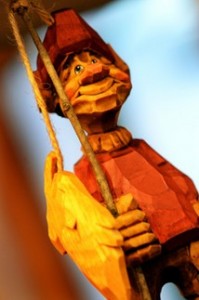 Figurine of a fisherman by Erik Rinkleff. Photo by Katie Sikora.

“The technique was to leave all the facets of the knife mark and add a little bit of detail and that was it,” he said. “They didn’t take it to the next step. The angular quality of the statue catches light at different, interesting and unexpected areas on the figurine.”

Erik mostly uses basswood for his carvings, a softer wood chosen for its predictably straight grain. By choosing wood that’s lighter and easier to carve, Rinkleff can carve longer.

Carefully regarding a red-robed, grinning Santa with a full white beard and wooden staff, Rinkleff said, “How do you convey a figure with fewer amounts of cuts? The bigger the cuts, the bolder, the more abstract they become. It creates an interaction between light and shadow – you have a sharp contrast. The abrupt angles show up. You’re using the angles to go around the shape. You want to leave those knife marks.”

The Woodsman character holds sentimental value for Rinkleff and his wife, Mary Ann.

“I remember the first carving that Erik ever gave me. It was a Christmas present,” Mary Ann said. “I couldn’t believe that someone made something like that with his hands – I was astounded, and touched. He still carves the design that he gave me, The Woodsman. I have watched it evolve. He’s obviously improved over the course of 11 years…but even so, unless you had the two pieces side by side, you might not see the difference.” 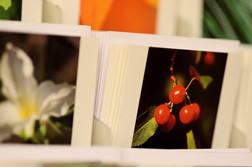 The Rinkleffs also feature Mary Ann’s line of inspirational greeting cards, Little Fish, and her fine art photography in the gallery. The greeting cards have her beautiful photographs on them, paired with a carefully chosen quote. Like Erik’s first figurines, she began by creating the cards as Christmas gifts for family and friends.

“I had enjoyed rediscovering photography during the time I spent in Nepal. That Christmas I created gifts for my family using some of my photos for cards – that really seemed to resonate with people,” Mary Ann said.

Little Fish, which celebrates its 10th anniversary this month, has developed a following over the years that surprises and inspires Mary Ann to keep creating new cards. Her first customers were The Clearing, Ecology Sports, and Door County Nature Works. The entire card line is available at Rustic Fish Gallery.

“The same way Erik has people coming back – [people] come back to buy the cards,” Mary Ann said. “And that really is gratifying. It makes me want to be able to put that time and effort back into it.”

When it comes to Erik’s skillfully carved figurines, Mary Ann said it’s fun to listen to people talk about, admire and appreciate his work.

“In a photographic composition you want something in there that speaks to someone, and elevates it from a picture to an image,” Mary Ann explained. “Each year Erik incorporates something that elevates his carvings…I’ve seen the evolution of their facial features. Every piece you pick up has a twinkle in its eye, or a slight grin, or some wrinkles in the right spot to make you fall in love with it. I think that’s why people come back, and recognize him as a talented artist.” 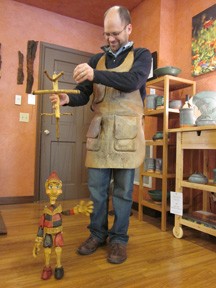 Eric Rinkleff shows off his newest creation, a marionette. Photo by Brittany Jordt.

A large, Pinocchio-like marionette hangs by the checkout counter. Erik took it down to demonstrate it’s fully functional limbs. The same marionette was recently featured at the Hardy Gallery.

“I did a fair bit of research on marionettes, and how they go together, how the strings are attached and how they’re controlled,” Rinkleff said. “[I studied] how they move – the mechanics of the marionette. I wanted it to move like a traditional marionette. The knee has to work, and the hand…everything is exaggerated and abstracted. You’re carving it, fitting it together; pulling it apart…it’s a lot of back and forth.”

Rinkleff pulled the strings of his Pinocchio and the marionette walked forward and back, his large hands swinging side to side.

“I’m not a theatre person so I don’t know how well, if at all, it would stand up in a production,” he said. “But the whole idea of movement intrigues me. It’s the combination of being a wood carver and a toymaker.”

Even without strings and hinges, Rinkleff breathes life into carvings. The twinkle isn’t just in Santas’ eye; Rinkleff’s expression has a touch of mischief gives each new character he dreams up a different personality. As a result, his work is endlessly interesting and unique.