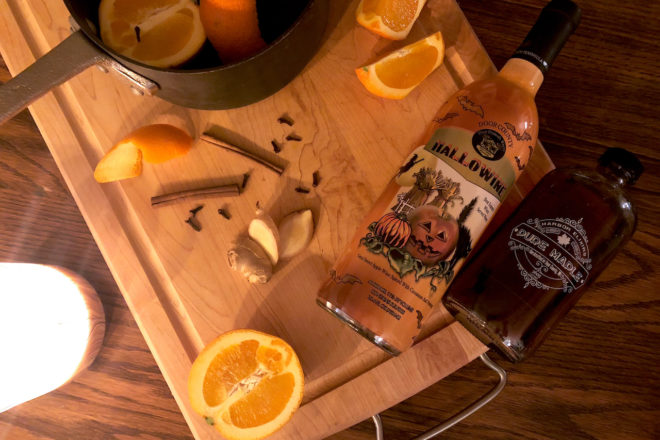 If there’s one tradition my significant other and I have managed to uphold over the years, it’s not an anniversary dinner or cheesy Valentine’s date or anything sentimental like that. Instead, it’s the tradition of slightly competitive pumpkin carving. Each October, right as the temperature begins dipping below 40 degrees and talk of Halloween costumes becomes frequent, we decide it’s time to pick out two pumpkins deemed worthy of carving and we designate an evening to creating our masterpieces.

We start the night with getting a fire going in the fireplace and I like to serve a warm beverage with snacks. This year, while picking up the snack portion, I couldn’t pass up grabbing a bottle Hallowine from Door Peninsula Winery. The label is quite over-the-top with a Halloween themed label featuring an apple carved like a jack-o’-lantern, a black cat poised in the hiss posture, a plethora of bats, a pumpkin, and its name “HALLOWINE” written in a font that looks as though each letter has been deposited with a pile of orange slime. It is rather eye-catching and clearly targeted at those shoppers about to partake in Halloween festivities, which is exactly why I popped a bottle into my basket alongside the new carving tools I seem to have to repurchase each year. 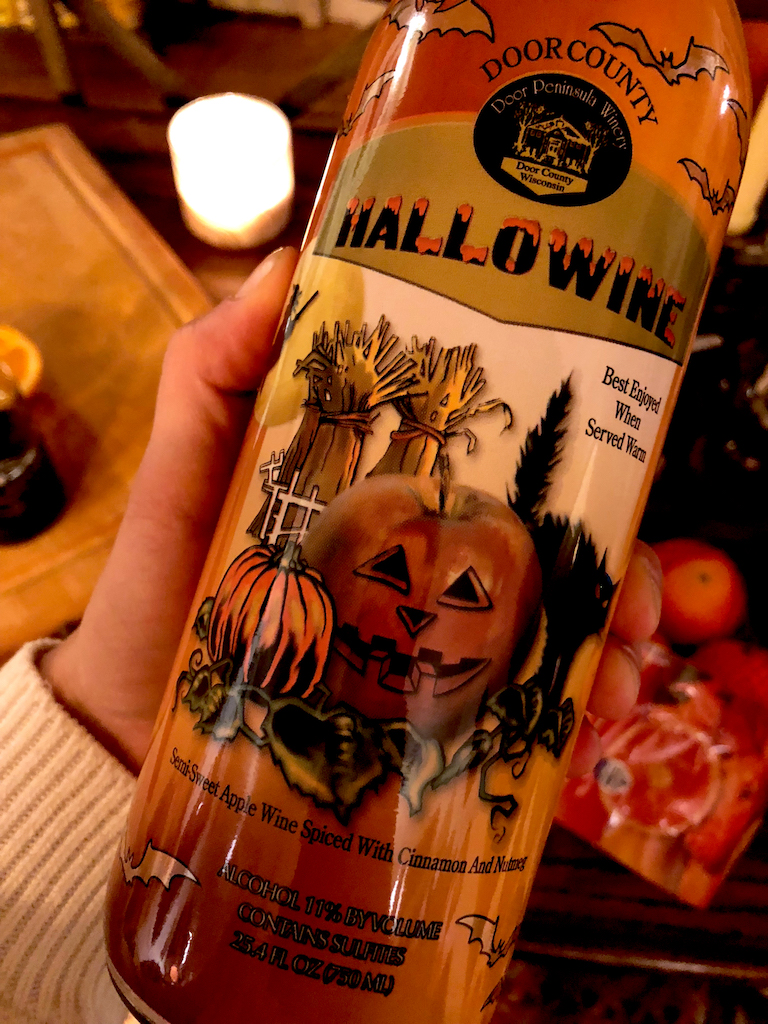 The wine is from Door Peninsula Winery, a Door County-based winery with headquarters and a tasting room located in Carlsville. The trademark for the brand is “Hand-Crafted Fun,” which is a good way to alert any oenophile to not take these wines too seriously. With more than 45 different wine varieties to its name, Door Peninsula Winery has found success by producing quality fruit wines and pioneering the creation of fruit and grape blends. You might recognize the apple-and-cherry-based Sunset Splash, which is one of the more popular wine varieties produced during the summer season.

Back to the Hallowine. Labeled as a “Semi Sweet Apple Wine Spiced with Cinnamon and Nutmeg,” the alcohol content is 11 percent by volume and it’s also noted that the wine is “best enjoyed served warm.” Taking this note seriously, I purchased a few items from the store to make a stovetop mulled wine. The wine already has cinnamon and nutmeg, so I selected oranges, whole cinnamon sticks, whole cloves, fresh ginger and a bit of local maple syrup to add to the flavors. A bag of candy corn-flavored kettle corn somehow ended up in my shopping basket too.

After assembling the saucepan with the ingredients and contents of the wine bottle, I left the pot to slowly come to simmer on the stove while we removed the innards from our pumpkins and brainstormed our designs. The room began to fill with an intoxicating orange and cinnamon scent, letting me know the mulled wine was nearly ready. I turned the flame off and waited for the steam to clear before ladling myself a mug full of the warm spiced wine. The liquid was slightly-spiced, sweet and fruity with the combination of apple and orange essence combining for a sugary treat. 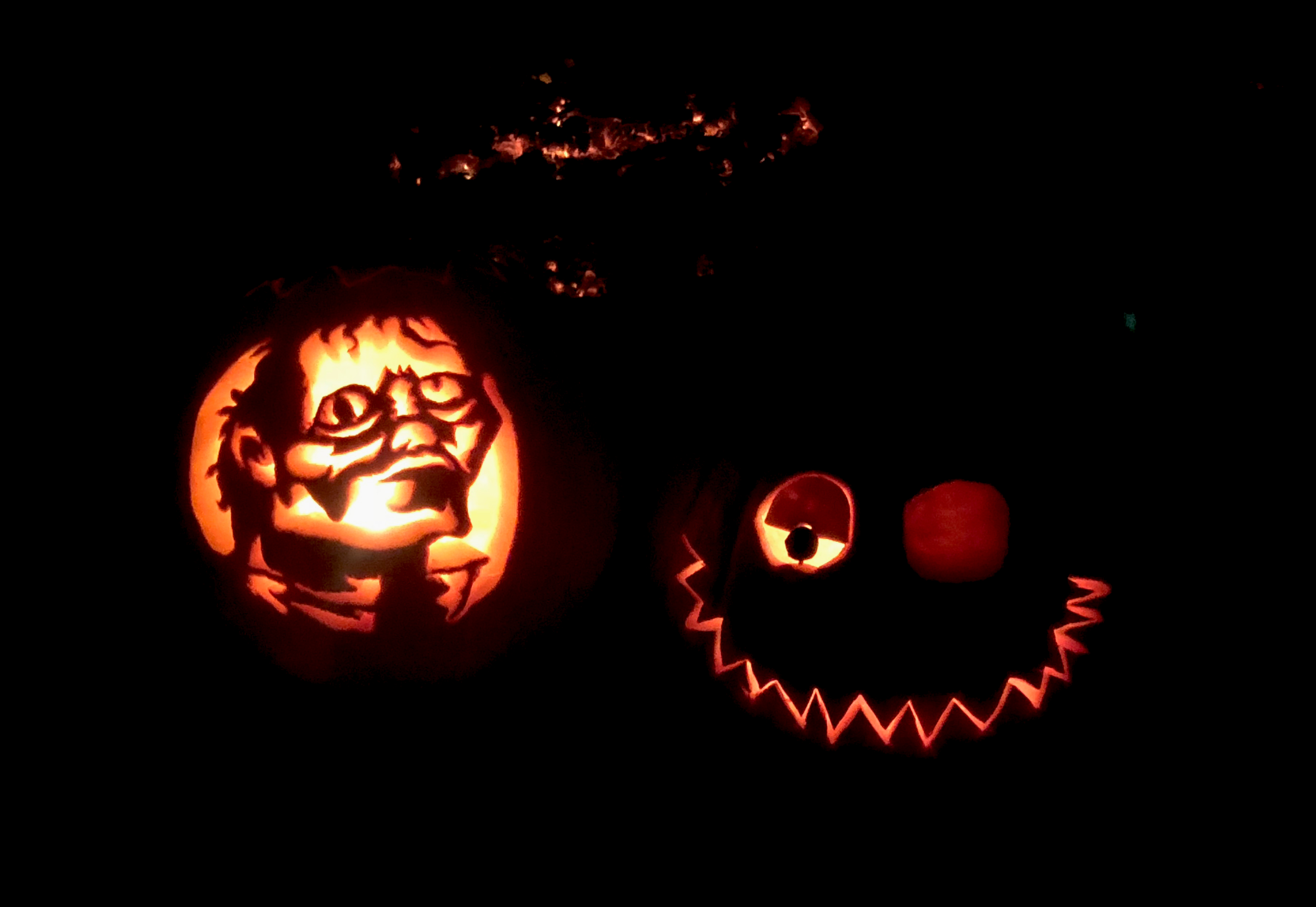 We sipped our mugs as we whittled and worked our pumpkins into something recognizable. Michael Jackson’s “Thriller” played in the background and the fire sizzled and popped with anticipation. Finally, the work was done and we rewarded ourselves with a second cup of Hallowine, which turned out to be the perfect drink for the evening. We toasted to another Halloween tradition completed and lit our creations to admire in the dimmed lighting. Cheers to another fun year of Halloween celebrations!