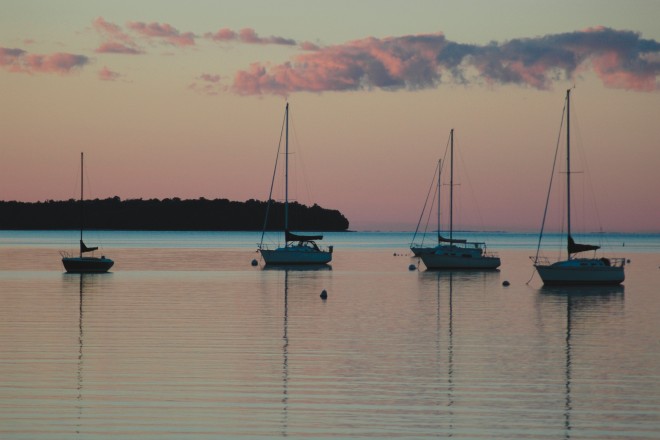 Sailboats swing in Eagle Harbor to a new wind brought up by the break of a new day. Like birds at rest, boats on moorings huddle together in safe harbors tethered to the seafloor. For sailors onboard these vessels and shore-side voyeurs, the picture of sailboats in a haven has been likened to tranquility or the completion of a successful passage.

For many, however, this same scene brings up as many questions as it does feelings. Why are the boats out there in the first place and how do people get to them? These are probably the most common wonders. The answers are as simple and revealing as the questions, yet the intricacies of properly securing a vessel to the bottom of the sea have spurred everything from patents to MIT studies.

What is a mooring?

A mooring is really nothing more than a really heavy weight with a tether, typically a chain, also known as ground tackle, which then attaches to a float known as a mooring ball. The boat is then attached to this simple system with a line, more properly called a pennant. Boats that are moored are most commonly located within a designated mooring zone. The moorings are ideally spaced far enough apart to keep boats from hitting each other. When the wind changes direction all the boats swing together, their bows always facing into the wind.

Why have a mooring?

A mooring can be a great alternative to a high-priced or congested marina. As many boaters new to Door County have discovered, even if they have the means or desire to berth their boat in a marina, the waiting lists are quite often as long as the years remaining in the lives of the current slip holders. So, if you are new to boating or new to the area, a mooring might be right for you.

Advantages of a mooring are many; yet, there are considerations to make before you fill out your mooring application. Although moorings are available to any watercraft, the majority of vessels in mooring fields are sailboats requiring deeper water. Smaller powerboats can be trailered away more efficiently than a sailboat. However, if you have a powerboat, don’t be discouraged by your sailing neighbors. There’s plenty of room for variety in a mooring field.

If you do go the route of a mooring be prepared to give up dockside conveniences such as easy access to your boat, shore power, and potable water. If your mind is made up, you are now ready to get in line. Fortunately, obtaining a mooring is not only less expensive, the waiting lists are shorter, too. Sturgeon Bay, for example, has had moorings readily available in recent years at reasonable fees. A Sturgeon Bay resident in 2007 paid $69 for the year, and an out-of-town resident paid $189. Compare that with a dock fee anywhere and the savings are apparent. Plus, Sturgeon Bay’s access to the lake and the bay makes it attractive, since it’s only a scenic day sail away from Northern Door waters.

Another place to check is the Sturgeon Bay Marine Center. According to Marshall Hanks of the Scuba-Do Dive Team, Sturgeon Bay’s inner harbor is home to approximately 80 mooring holders, most of which are maintained by Hanks and his business partner, Craig Destree. Hanks says that he has been maintaining moorings for 35 years up and down the peninsula, completing mandatory inspections for most of Sturgeon Bay’s moorings. He and Destree also service moorings in Fish Creek and a couple in Ephraim’s Eagle Harbor. Though moorings are privately owned and maintained, Hanks explains that municipalities dictate fees and inspection schedules.

Villages north of Sturgeon Bay (Egg Harbor, Fish Creek and Ephraim) all have waiting lists based on merit points, which are determined by such things as residency and number of years on the list. Most municipalities request proof of current boat ownership, as well. Typically this list moves much more quickly than the dock waiting list.

Mike McCarthy, a former harbor master in Egg Harbor, oversaw its moorings from 1999 to 2006. McCarthy summed it up this way:  “Most people in boats would like to have a mooring. It’s like having a tree fort in your backyard. It’s somewhere you can hang out in private; it’s true freedom on the water with nothing to do with land.”

The size of your mooring system depends on the displacement or total weight of your boat’s hull. When considering weights and sizes of the mooring anchor, chain, and accompanying float and pennants, go big. Weather, corrosion, and wear and tear from the elements are at constant work against your gear. For the sake of your vessel and others around you, don’t skimp.

The most common weight used in Door County’s mooring fields consists of a locomotive wheel filled with concrete. Other configurations that exist are locomotive wheels that still contain the axle, train wheels filled with rock, or old engine blocks from automobiles. Concrete blocks are also used alone or in conjunction with these other weights. Keep in mind that concrete loses one third of its weight in water and is not a reliable stand-alone mooring.

A chain is then attached to this weight affording strength through thickness which will ideally last several seasons. A mooring buoy is then attached with a U-shaped shackle and pin. This shackle must also be substantial and will attach to a pre-made fitting on the bottom of the buoy.

Now that the mooring system has been created, the boat can be attached to it. Two thick lines known as pennants should be created by someone with splicing skills, usually a rigger or similarly salty individual. Deb Duren of Yacht Works in Sister Bay can splice mooring pennants to your standards. Duren said that with the exception of the mooring weight, she can provide all the gear and labor needed to complete a mooring system.

The two pennants need to be shackled to the chain that sits under water. These pennants then lead up to the boat through bow chocks (leads in the bow of the boat) and back to cleats. Often a small messenger buoy with a long stick will also be attached to the chain and the pennants can be tied to it when departing the mooring. This messenger buoy allows for easy retrieval of the mooring pennants which actually come onboard and slip over the boat’s bow cleats.

For the do-it-yourselfers, putting a mooring system together could be a fun weekend job; for others, it may simply be another unwanted chore. If you fit in the latter category, there are professionals at your service to get your boat onto a mooring. Of course there are a myriad of online chandleries that can accommodate your every need. Talking personally with experienced professionals would be the safest bet. The men and women creating and servicing moorings know the weather and the tough standards needed to keep your boat off the beach.

Maintenance and preparing for weather

And when those occasional breezy blasts of summer or fall gales do come, you need to be prepared. Preparation should not be determined by a short-term weather report. Annual inspections of your mooring system should be made each spring, and mooring balls and pennants need to be removed and stored each fall for the upcoming winter. A visual inspection of the chain-to-weight connection should be made annually by a diver. Equipment must not be significantly corroded, chaffed or impaired. At stake is not only your boat, but the others it could hit should it break free in a blow.

There are a few things to consider when leaving your boat on a mooring. According to an MIT study conducted after the 1991 landfall of Hurricane Gloria, most boats on moorings are not prepared for severe weather. Though we don’t have cyclonic hurricanes in our region, we do have hurricane-force winds from time to time and northerly or westerly gales have created large waves that have set boats on the beach up and down the peninsula. The study concluded that nylon pennants actually heat up internally from the friction of stretching and shrinking. Pennants, therefore, should be made of braided polyester.

John Klein, an avid sailor hailing from Eagle Harbor, has two separate pennants. They attach individually to the chain below the buoy. Should one break the other will still hold, as they are not spliced from a common line. Another recommendation is to have a three to four-foot length of fender tubing sewn to the pennants where they pass through the bow chocks. This will protect against chafe in a storm. In case the pennants chafe through, back your system up with a line shackled from the chain on an independent link through your bow chock and around your mast. Snubbers can also be installed on your chain to take the jerking motion out of a rough ride. Keeping pennants shorter also reduces chafe and excessive movement, according to Charlie Klein of Dorsal Sails in Sturgeon Bay.

Another MIT study found that using a riding sail is a good way to keep a boat into the wind, causing less oscillation and therefore less chafe. This simple device is a small Dacron sail that is rigged on the backstay of your sailboat. Inexpensive and easy to install, it was the study’s number one suggestion for reducing chafe and, ultimately, the failure of a mooring system.

After your day on the water, complete a simple checklist before you board your dinghy and head for shore. Make sure your bilge pump and batteries are turned on (also have your batteries checked by someone periodically).

If you’re planning on leaving your boat unattended for a long period of time, you should have a solar panel wired to keep your battery bank charged. Your rudder should be firmly lashed in a fore and aft position. The wheel or tiller must be manually tied off since wheel brakes can fail and tillers may jump out of unsecured lashings. An unchecked rudder in a storm can cause extensive damage that could eventually sink a boat. All loose halyards and gear, too, should be secured and roller furling jibs should be completely wrapped and cleated. If leaving the boat for a long period you may want to simply remove the jib, reducing windage aloft. Dodgers (canvas canopies) should be put down in case of long-term gales as they also increase windage considerably.

Each fall in Door County brings gale force winds, increasing the risk of damage to boats on moorings. The bright side is that marinas are emptying out and slips are available at reduced rates should you need them. Avoiding the rough fall weather by docking your boat is the smartest way to spend the end of the boating season.

With preparation and a little work upfront, you will be ready to enjoy the tranquility that others may never know. Life on a mooring is typically more peaceful and can be just as safe as having your boat in a marina. So look forward to those sunsets of solitude or fun with friends and family afloat in your own piece of paradise.