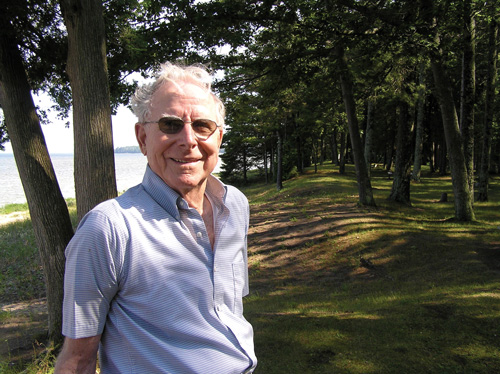 Watching my grandfather Hank Eckert’s weathered hands sift through relics of mail, he smiles and says, “You have a big job ahead of you!” He has had a big job – as a soldier in World War II and the former postmaster of Sister Bay – and quite a happy life.

Henry George Eckert, born in 1921, to Bertha Seiler and Henry Carl Eckert, was the second of four children. His father, a stonemason, constructed many things, including the Edgewood Orchard barn, the wall and benches at Sunset Beach Park in Fish Creek, and their own house. Growing up in a small log home on the fringe of Fish Creek, Hank recalls winters skating, cross-country skiing, and sledding, exploring the wilds. 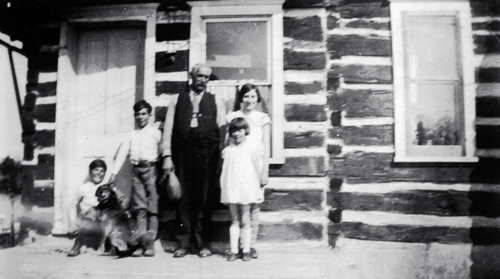 Hank Eckert (second from left) at his childhood home in Fish Creek.

“Once, I ice skated all the way to Chambers Island, returning the same night,” he says, eyes growing wide.

An avid Boy Scout, Hank learned skills that would later help him in the war. Also successful in school, he was captain of Gibraltar’s basketball and football teams, class president, and prom king. In 1943, he attended Ripon College, earning a Bachelor of Arts in education, and participating in basketball and Army ROTC.

As a senior, World War II broke out, and two weeks after graduation Hank was in the United States Army. At 23, he graduated from infantry officers’ school as Second Lieutenant and boarded a packed ship to Europe. In charge of a platoon and company of men, he fought at the Maginot Line, losing his roommate, and then the Battle of the Bulge.

“It was a brutal war; you never knew whether you’d see friends or loved ones again,” he remarks.

For Hank, and many other soldiers, the mail that arrived every two weeks was uplifting, bringing happiness to a bleak situation. “Nobody wanted a ‘Dear John’ letter, when a girlfriend or wife would break up with them,” he chuckles wryly. To these men, the anticipation of a handwritten letter from a loved one really was something to live for. 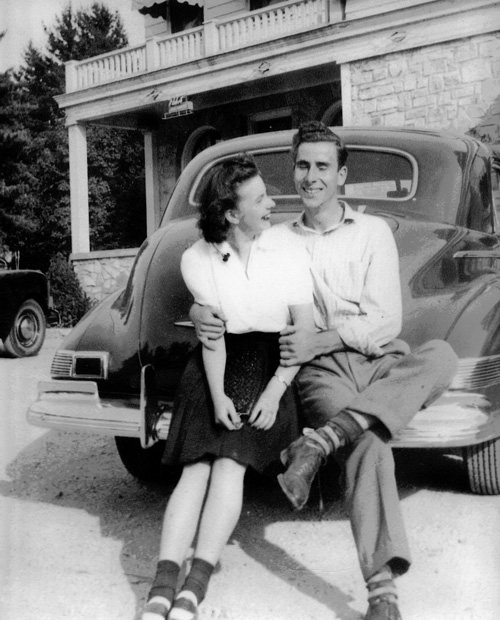 When his commander was wounded, Hank was put in charge of the unit. He recalls running into a field with bullets flying, getting hit in the jugular, and falling down, unable to call for help.

“I propped up my head with a gas mask, which delayed the bleeding. That helped save my life,” he says. Waiting into the night, he heard voices, “Get Eckert; he’s hurt!” Laid on an old schoolhouse door, he was hauled back on the hood of a truck. He recovered for months in England, finally arriving in America. With several operations, he regained his strength and voice.

Hank, who was honorably discharged and awarded the Silver Star, Bronze Star, Presidential Unit Citation, Combat Infantry Badge, and Purple Heart, happily returned to Door County to be with his wife, high school sweetheart Donna Berns. They settled in Sister Bay and had four children, enjoying picnics in the park, bicycling, and an idyllic, peaceful family life. Hank worked at the lumberyard before taking an exam for the postal service.

“In 1951, I was appointed by President Truman to be postmaster of Sister Bay. Now people move up the ranks. There were three of us:  one road carrier, one postal clerk, and myself,” Hank says. The job provided a decent living, and he loved the sense of companionship. He called it, “one of the best jobs in town.”

“I developed a real rapport with people, and got to know everyone in the county,” he says. “I learned about their lives – that was special.” 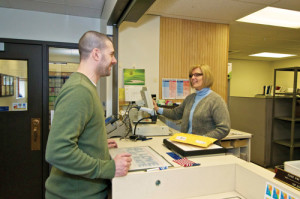 Thriving on a sense of community, Hank was president of every organization in Sister Bay at one time or another. He was a leader of Boy Scouts for 30 years, receiving the Silver Beaver Award, in the Lions Club for 35 years, and a member of American Legion for 65 years.

Hank’s career continued until 1979 when he retired. Wintering in Arizona, and enjoying summers in Door County, he recently returned to Sister Bay full time, to be with his family and many friends. Savoring every moment of life and following his own simple, yet striking, saying: “Happiness…happiness.”