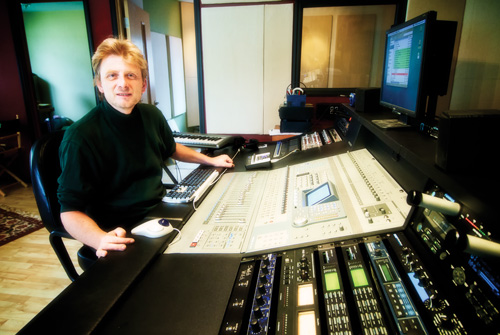 Hans Christian’s eyes project a combination of intelligence, patience, and kindness. He ushers me into his studio early on a Sunday morning, and it feels like a sacred space. He is leaving the next morning for an extensive tour, but no worries – everything is packed and ready to go. “I don’t like to feel rushed,” he says.

Hans is known to audiences as a powerful performer, and to fans of spiritual music as a unique composer and interpreter. He is also beloved by musicians as a collaborator of the highest caliber and an expert recording engineer who records some of the area’s finest artists at his Studio 330 on Third Avenue in Sturgeon Bay. And Hans can tell you when it all began:  his first cello lesson in his hometown of Hannover, Germany.

“It was January 20, 1970. And yes, it was love at first sight,” he says. But although he studied classical music seriously, he was always an improviser.

“My father was a minister in the Lutheran Church – this was a real church, a gothic church – and the acoustics were magnificent,” Hans says. “I would go there myself without my father’s knowledge and play in the dark.”

Even as a young boy, Hans wanted to look inside the music. He took his cello apart and put it back together. “There’s so much to discover,” he marvels. He has certainly discovered much about the 200-plus-year-old cello he acquired in 2005. He found it in a large warehouse of instruments in his hometown, while visiting his parents. It was dusty and neglected and needed repairs. But Hans was drawn to it, and after purchasing the instrument began to do more research. He eventually came to hypothesize that the cello may well have belonged to gypsies who roamed through the area – making it a perfect match for Hans who has lived in Europe, California, and Wisconsin and travels the world performing and finding inspiration for his music.

Hans’ current solo career incorporates his cello, as well as the Indian sarangi and sitara and the Scandinavian nyckelharpa. Trained classically, Hans has played it all, from rock to blues, working as a studio musician and playing bass with underground rock bands in Los Angeles after emigrating from Germany in 1982. Influenced by the minimalist works of Philip Glass and others in the ‘80s, he found himself in San Francisco in the ‘90s, during the rebirth of yoga and chant. He began experimenting with “looping” a process of recording a line of music and then improvising on top of it. He found this new form “so expansive – it was like de-egotized music.”

In 1998 he formed the group RASA with Kim Waters, creating a meditative, sacred sound derived from devotional music of ancient India. Since 2003, Hans has produced seven solo albums on his label Allemande Music, which have drawn critical acclaim from reviewers including Billboard. Writer Andrew Harvey calls Christians’ music “unique…It marries sumptuous classical elegance with a raw and profound spiritual passion.”

Hans fell in love early with the recording studio as well. At age 16, he was playing bass in both a rock band and a flamenco band in Germany. Both bands decided to record in the same studio, and there was something magical about the recording process for Hans, as he describes, “I could finally be who I wanted to be.” A few years later, Hans came to the well-known Deutsche Grammophon studio in Hamburg, and “I begged them to let me in the building. I offered my services cleaning toilets. I wanted them to show me how this works!”

He has certainly figured it out. Hans’ studio is warm and subdued, with glass paned walls that enable musicians to see each other as they lay down their tracks. The roster of musicians who have recorded at Studio 330 reads like a who’s who of Door County music:  Julian Hagen, Jeanne Kuhns, Early Thomas, Rändi Fey, Lynn Gudmundson, and more. But how did Hans end up in Door County, of all places? The same way many other Door County performers have ended up here – through a connection with Fred Alley of American Folklore Theatre.

“I had a recording studio in San Francisco in 1988, and I recorded an album for Doc Heide and Fred Alley called Lessons I Learned from the Moon,” Hans says. He and Fred became good friends, and Hans continued the musical relationship as well, recording subsequent albums for Fred and friends. Visiting Fred, Hans fell in love again – this time with Door County.

“It was the total antidote to California,” he smiles. “I decided to buy a house, but when it was in escrow, Fred died.” Fred’s loss was a huge blow for Hans, but in the end he decided to come anyway. After six years in Sister Bay, Hans moved to Sturgeon Bay, to the beautiful rambling Victorian house that he and his partner Jenwah Panther have converted into a combination art gallery and recording studio.

Hans describes his recording business as “the perfect marriage of being in the world and doing the work I love to do.” There’s no doubt in his mind that his experience as a musician helps him shepherd other musicians through the recording process.

“I love musicians,” says Hans. “They come in all varieties and all levels of craziness. We’re all members of the same tribe, and they’re all welcome here.”

The psychological aspect of music making is particularly compelling to Hans, who says, “I have a sense of whether people are on target – whether they are self-conscious or self-delusional, and I can help them be centered in their own creativity.”

Washington Island musician Julian Hagen counts Hans a mentor and a friend. “Hans is so generous, both musically and in terms of his technical knowledge.” Having recorded several projects with him, Hagen marvels at Hans’ technical skill, as well as his calm. And as a musical collaborator, Hagen says, Hans is second to none.

“We used to play the Sunset Cruises out of Gills Rock,” Hagen says. “Hans can play anything, he can fit in, and even though he’s a far better musician than I am, he doesn’t intimidate. He’s kind that way.”

One of Hans’ most recent projects was recording local rock musician Early Thomas. “It was a blast,” says Hans. “It gave me a chance to live out a different side of myself.” One gets the feeling that there are many, many sides to Hans Christian, and more yet to be discovered.