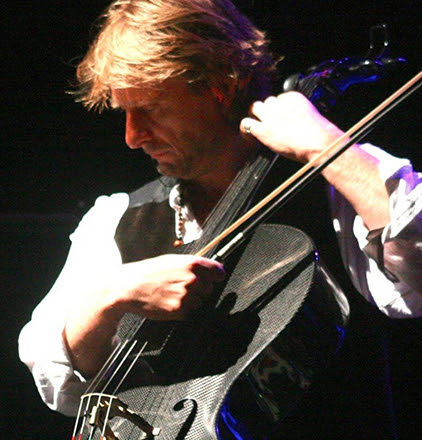 Hans Christian performs July 7, 7 pm at Woodwalk Gallery. Christian’s work as a performer, producer and composer has been documented on countless recording projects since he arrived in Los Angeles from Germany in 1982.

Trained as a classical cellist and a professional bassist, Christian quickly developed as a talented recording artist and record producer, working in the 1980s with Robbie Robertson, Gene Clark, Sparks, Billy Idol, members of the Red Hot Chili Peppers, Toni Childs, Victoria Williams, and producer Daniel Lanois. In the 1990s he branched out into the chant genre and collaborated with Krishna Das, Dave Stringer and more. In the 2000s he started the World Music group RASA (together with singer Kim Waters) and released six CDs to critical acclaim.

As artist-in-residence for six years with Wisdom University’s New Chartres School in Chartres, France he has had rare access to Chartres cathedral for solo performances resulting in three solo cello CDs that were recorded inside and around the famous cathedral.

His music has been featured in several soundtracks, most recently in multiple episodes of the Sundance channel production Rectify.

His work as producer and composer is based at STUDIO 330 in Sturgeon Bay. Woodwalk Gallery is located at 6746 Cty G in Egg Harbor. For more information visit hanschristianmusic.com. For tickets, call 920.629.4877 or visit woodwalkgallery.com.