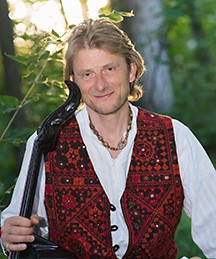 Cellist and multi-instrumentalist Hans Christian will perform a solo concert on cello, ethnic string instruments, Tibetan bowls, and live looping at Woodwalk Gallery on Sept. 3 at 7 pm. He is celebrating the release of his 2015 CD called Nanda Devi, which is released through New Earth Records and is distributed by Sounds True/The Relaxation Company.

Christian has become known for his creative approaches in his own music. Classically trained in Germany, Hans came to the U.S. in 1982 to pursue a career as a rock bassist and cellist. He quickly got involved in a thriving music scene in Los Angeles and worked with a number of musical luminaries (Robbie Robertson, Gene Clark, Sparks, members of the Red Hot Chili Peppers, John Waite, Billy Idol) before a persistent call to discover his own music led him into the genres of world music, meditation music, and a blend of classical and ambient music. His work as a music producer and mixer has been captured on countless recordings, as well as his creative cello playing which continues to be in demand by artists from around the country.

Nanda Devi (named after the second highest mountain in India) features a multitude of esoteric instruments, some of which Christian will play during his concert at Woodwalk. He will also play some material from his most recent trip to Chartres Cathedral where he performed daily as a soloist and with noted modern mystic Andrew Harvey.