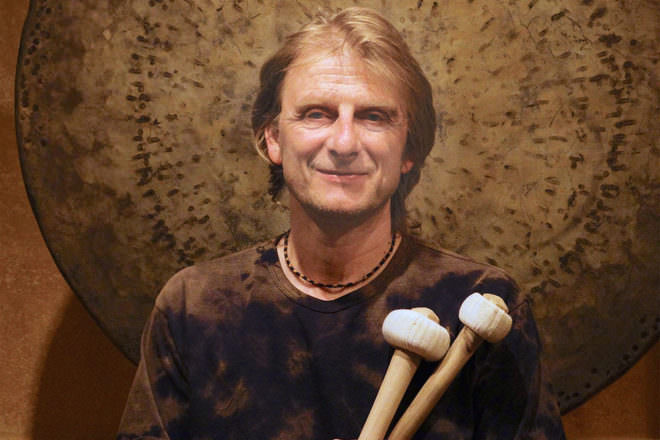 After years of dazzling audiences with melodious tunes on his signature cello, Sturgeon Bay musician and producer Hans Christian has unveiled his first foray into ambient territory with the release of his new album, Source.

Performed entirely on gongs and Tibetan bowls, Source is an experimental project recorded live in his studio over the course of two days without computers, overdubs or additional instruments. The six pieces on the recording range from eight to 18 minutes in length, and represent the fulfillment of Christian’s goal to create a musical repertoire for instruments whose musical language he has spent 30 years discovering.

“The gongs are very different than the bowls. In a way, it’s a whole other world,” Christian said. “The gongs are much darker and much more mysterious than bowls. Bowls have a certain purity and they’re very pitched. In a Tibetan bowl you have multiple pitches that are working against each other to create vibrations … the gongs I use are not very pitched so it makes them, in a way, very difficult to play because you have to discover the deeper aspect of the musicality that comes out of these gongs. 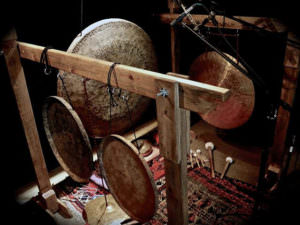 “That is a really interesting gap to cross,” he added.

After two years of experimenting with various mallets and playing techniques, and essentially rediscovering “the very basic elements of music: time, density, movement and sonic content,” Christian decided he was ready to record.

Source is a largely improvised album that Christian describes as raw and powerful, yet sublime and restrained. Ultimately, he explains, it is a journey toward source energy, one capable of transporting its listeners to a deep, contemplative listening space.

“What I experienced when I first got deeply into the gongs was I felt kind of a travel through time but not just time as a calendar but time as in creation,” Christian said. “I went back to source, I went back to a non-dualistic state, a state of oneness where you don’t judge, we don’t even differentiate between yourself and the world around you, you go into a deep listening space and all the sudden there’s an ancientness there. They may remind you of volcanoes and galaxies and planets, they have that ancient cosmic quality which we carry in ourselves, I believe, which is non-dualistic. That’s why I call music ‘source music.’ It’s a story toward the journey toward source, our source…it’s the beginning of our being in a way. It’s a fascinating experience to really go deep, you lie there, you close your eyes and you just float away.”

Christian describes himself as being known as “a bit of a weirdo, musically speaking,” who reserves the right to follow his calling. With Source and its diversion from his typical multilayered, melodic outputs, Christian followed that calling through to fruition with a project that surprised even him.

“It exceeded my expectations. I really mean that,” he said. “I was thrilled when I heard it…there’s a restrained quality on the CD that I love. You can trust the CD, you can trust the music, it will never jump at you. It will never get uncomfortably loud or uncomfortably intense. It draws you in with its mystery. In general I like that about music, when the music invites me to go closer rather than pushes me away because it gets too intense. I really like what happened which is why I decided to put it out as a CD. It’s a beautiful little project.”

Christian will celebrate the release of Source with a gong concert on Thursday, Feb. 9 at 7 pm at his recording studio, Studio 330 in Sturgeon Bay. Guests are asked to bring blankets and/or pillows to sit on the floor during the one-hour concert. Donations will be accepted.

For more information or to purchase the album, visit HansChristianMusic.com.