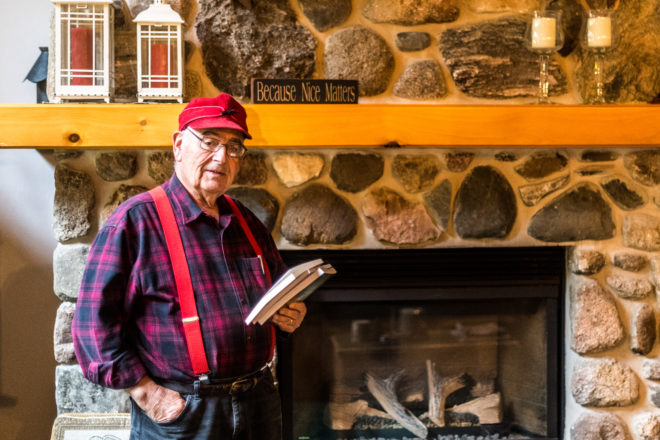 Hunter Hans Feld holds a collection of his books based on decades of deer camp journals. Photo by Len Villano.

By Door County standards, Hans Feld got a late start as a deer hunter. He was 18 in 1951 when he shot his first buck – an eight-pointer – on his grandfather’s farm near Matchwood, in Ontonagon County, Michigan. But he remembers the day vividly, as well as the 65 hunting seasons since then.

“There was a group of 14 or 15 of us,” Hans said. “Family members and half a dozen ‘overflow hunters’ from a neighboring farm. My older brother, Bernie, told me exactly what was going to happen, and it worked out just the way he said it would.”

The reason Hans has perfect recall of that first adventure is because he recorded notes about it in a three-ring binder.

“My Aunt Luwilla Jarchow, in whose farmhouse we were staying, said, ‘If you’re going to hunt here, you’re going keep a journal.’ She told all of us that, but I was the only one who always did what she said to do. I learned so much from that. She was my mentor.”

That journal now holds records of 66 hunting trips to Matchwood, and last Wednesday, Nov. 8, 2017, when he was interviewed for this story, Hans was baking cranberry cookies with brown butter icing for trip #67. When he’d been keeping the journal for three years, it was lost during a family move, and Hans thought he might as well quit. However, when his aunt asked that fall how his journal was coming along, and he told her he’d given up on it, she said, “Oh, no you haven’t. Do you still have your field notes?” Hans said he did. And she said, “Then you get busy and rewrite those three years.”

Matchwood was named for the Diamond Match Company that was headquartered there. It was the largest match producer in the country in the late 1800s.

“I remember it as a ‘cut-and-run outfit,’” Hans said. “Matchwood was a nice little place then, but today there’s just a sign and two junk trailers. When the post office closed, it lost its identity.”

Family members continued to stay with Luwilla and her sister, Adela, during hunting season until the women were “pushing 90” and no longer able to handle the extra work. So the hunting party moved in 1981 to the camp Hans had spent several years building on the property, and it’s been the center of seasonal activities ever since. It’s not fancy, but it’s comfortable – a far cry from the way hunters survived in the area a hundred years ago. 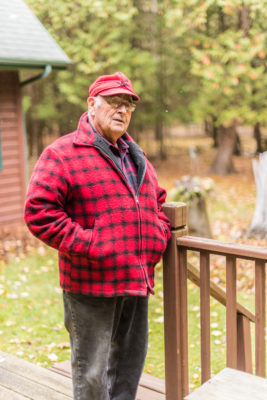 Writer and outdoorsman Hans Feld at home in Nasewaupee. Photo by Len Villano.

Hans has spent a lot of time researching old stories in the Ontonagon Herald, founded in 1891.

“Farmers in the area made quite a lot of money,” he said, “by picking up hunters who came up from lower Michigan by train, taking them in a horse-drawn sleigh to a camping site and picking them up 16 days later. They slept in a canvas-wall tent on a wooden platform, and if they didn’t get a deer in a few days, they went hungry.”

That’s not the only change Hans has observed in hunting culture.

“We don’t have hunters like we used to, who go out and spend all day in the woods. Now we have shooters. They maybe go for half a day, then come out and go to town and sit in a bar and complain that there are no deer and what the DNR is doing wrong. If you want to hunt, you can’t do it inside.”

When the third generation of Hans’ family came along, the young folk were fascinated with his hunting journal. After so many decades, that three-ringer was getting pretty thick.

“They said I should turn it into a book,” he said, “but I wasn’t a writer. My friend, Rudy Senarighi, who has written four books about fishing in northern Minnesota, told me, ‘You can talk. All you need to do is talk with a pen in your hand.’”

So far, Hans has published three books: My Compass Points North, A Return to the North and That’s the Way It Yoosta Was. (The first two are available in Door County libraries.)

“I wasn’t planning to write any more,” he said, “but when I was interviewed on Channel 2 the other day, the fellow said I was going to write another book this winter, so I guess I have to. I’m thinking of calling it Boiling Coffee and Wood Smoke because it’s not really a hunting camp unless you can smell those things – and frying bacon – as you approach it.”

Hans saw Northern Sky Theater’s production of Guys and Does a few years ago.

“It was very good,” he said, “but that’s not really the way it works.” No mystical white deer? “Oh, there is mysticism,” he said. “Like when a four-point buck someone shot has turned into an eight- or ten-pointer by the next season.”

Now, the story of how Hans got his first buck?

“My brother said, ‘This is how it’s going to happen. There’s going to be a doe that comes out of those evergreen trees over there. She’ll come halfway into this clearing, and she’ll dance around, getting very nervous, and then she’ll go back. You wait five or ten minutes, and she’ll come back across the clearing like an old plow horse, confident as she can be, and the buck will be behind her.’ And that’s exactly the way it was.

“I’ve hunted for 66 years, and it has never once happened that way again!”