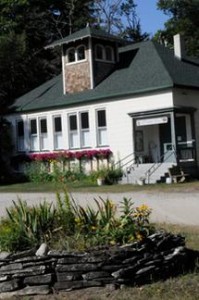 In a tiny nook of the historic Jackson Harbor Schoolhouse on Washington Island, there is a small, narrow cupboard built into the wall. This cupboard is where the teacher used to put the items that would cause distractions in her class – toys, games, and other things that would be given back to the students when school was wrapped up for the day.

The schoolhouse is now home to the Sievers School of Fiber Arts, but the cupboard is still there – and it’s still used to put away the distractions of the students – although in a slightly different way.

“We tell our students to write down their problems and worries and leave those scraps of paper in the cupboard for the duration of their stay with us,” says Ann Young, director of the Sievers School. “We want students to be able to relax and feel inspired and creative. It’s hard to do that when you’re worrying about things at home.” 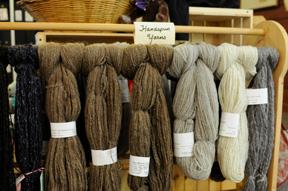 Young goes on to say that many times, students at the school get so relaxed that they are willing to part with their cell phones, which is often their one source of communication with the outside world while they are on the island.

“It’s actually good that they do this – you don’t get much of a signal anyway!” she laughs.

Tuning into this relaxation is what Sievers School of Fiber Arts is all about. The school was founded by Walter Schutz, who lived with his wife Sophie around Beloit, WI before moving to Washington Island in the early ‘70s. Sophie had taken weaving classes at a Beloit vocational school as a hobby before they had moved to the island, and Walter saw how much Sophie enjoyed these classes.

Schutz himself worked as an advertising man, but also loved woodworking projects. He built a loom for Sophie, and then realized that there might be other weavers out there who needed help in building and assembling a loom. Knowing the right words for his ads and the correct markets for his product, he inserted a small 2” ad in an issue of Better Homes and Gardens magazine, advertising how to “Build Your Own Loom.” Sievers Looms was born – Schutz named the business after Sophie’s maiden name, because he liked that it rhymed with “weavers” – and calls about the looms began rolling in. The original ad was followed by additional ads in Good Housekeeping and McCall’s, and soon there were close to 125,000 inquiries from nearly every part of the world. It was found, however, that people liked the design of the loom but it was difficult to build. Schutz designed a table loom and a folding floor loom that was able to be mass produced, and soon he found himself not just in the business of drawing up plans for looms, but also constructing them.

Ann Young was first hired by Schutz to be an envelope stuffer for the direct mail business, with her husband Butch and his brothers being the ones that constructed the majority of the looms. By now, in addition to the many questions about loom plans and construction, Sievers Looms was getting plenty of other comments. Information about looms and weaving was really limited during the mid-‘70s – vocational schools often had classes, and a few schools existed, but most weaving teachers were not too qualified or practical. People wanted to know where they could take classes and learn how to weave.

The thought of having a school completely devoted to weaving was enticing – in an abridged version of events, the Schutzes purchased the Jackson Harbor Schoolhouse, restored it with the help of the Young brothers and set up the outline for the school’s first year of classes with the help of Mary Sue Fenner (who is still teaching at the school, 29 years later). They restored the old woodshed across the street to serve as a teacher’s dormitory and opened the school in the summer of 1979. Shortly after, the old Hanson barn to the south of the schoolhouse was converted into a dormitory for the students. 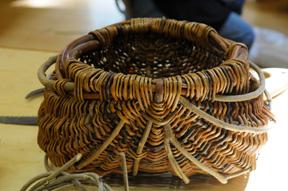 Since that first summer, attendance at the Sievers School has only increased – from seven teachers, 15 classes, and 33 students in 1979 to 50 instructors, 70 classes, and just fewer than 600 students during a summer season. Teachers and students are from all over the nation, with a few students coming all the way from countries such as England and Switzerland.

Ann and Butch Young took over the Sievers School in 1987, having been involved with the different nuances of the Sievers business from the very beginning. The Youngs expanded the Sievers offerings, beginning a consignment shop in the schoolhouse in 1989, which is now home to the work of over 130 artists. They also constructed two new studios – the Sophie Studio in 1996 and the Walter Studio in 1999.

Young says that while the school gets plenty of new students each year, she estimates that about 70 percent of their enrollment consists of returning students. “There’s a camaraderie here that really is amazing. Students who initially met at Sievers now travel together to get here for their classes.”

The school offers classes in every fiber art imaginable, from weaving, quilting, and basketry to things like woodcarving and papermaking. Classes also range by degree of difficulty, with beginner’s classes in every type of class. 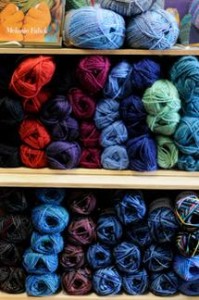 “We want people to learn these arts, and to enjoy them,” says Young. “If they are too difficult, no one will want to learn.”

Students who have attended the school for a specific medium will often cross over to another medium, and Young stresses that sharing is an important element of the school.

“We often have two different classes going on at the same time, and we encourage students to visit with one another. All fiber arts have a different process, and it piques curiosity.”

When asked about the allure of fiber arts, Young is quick with a response. “Walter always used to say that ‘happiness is in your hands,’ and that’s exactly how it feels to weave or quilt. Taking material and creating things that are wearable and functional – it’s very joyful and therapeutic.”

It’s a therapy that the Sievers School wants to share with not just visitors, but also with those that make their home on the island. Besides the classes that are taught during the summer, Sievers has also been teaching winter classes for over 20 years.

“Islanders work so much during the summer, and we wanted to give them a chance to take a class in the winter, when life slows down for them. The island community is very supportive of us,” says Young.

The school also hosts a biennial gathering in early October, a two-day event filled with demonstrations, food, and door prizes. “Gatherings are for students, customers, instructors, islanders, other fiber artists, or simply anyone who is interested,” Young says.

Sievers has received national recognition for its school, and Young insists that while she and her husband Butch have done much to further the school’s mission, it is original founder Walter Schutz that deserves most of the credit.

“Walter was a true ‘idea man’ – if he wasn’t thinking of a new idea, he was trying to improve on one he already had,” she laughs. “Our school has endured because of his hard work.”

Sievers School of Fiber Arts is located on Jackson Harbor Road on Washington Island. Classes are held May through October, with additional classes being held during the winter months. Class registration for 2009 begins February 1. For more information, please call the Sievers School at 920.847.2264 or visit http://www.sieversschool.com.