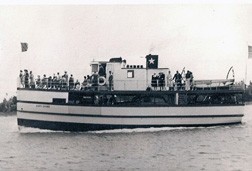 “Mutually dependent…ships, crew, passengers, freight, the resident Islanders and their products…water commerce and Island growth have evolved on a parallel course.”

The Washington Island Ferry Line began in 1940 with two wooden ferries, a far cry from the modern vessels that ply the waters between the Island and Northport for as many as 25 round trips a day during high season and two round trips per day in winter.

But for four years with the United States Navy, Purinton has lived in Door County all of his life. He has called Washington Island home since 1974, when he began working for the Washington Island Ferry Line, first as a deckhand, then captain, general manager and company president. But it was as a boy growing up in Sturgeon Bay where his love for water and ships began, as he wrote in one of his blogs:

“One point I always found exciting and also satisfying was that from the front of our home, which was situated along Memorial Drive where we saw many of these vessels pass, including the cross-lake car ferries when they were still in service, was that I could some day take a vessel from that point and sail to any port in the world’s oceans. That thought allowed me to dream, an activity I still enjoy!” 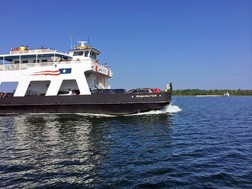 In 2007, encouraged by Door County writer Norb Blei, Purinton wrote for Blei’s Cross+Roads Press Words on Water: A Ferryman’s Journal. This year he released a compilation of his blogs, archived at ferrycabinnews.blogspot.com, in honor of the ferry line’s 75th anniversary. The following is derived from all of those sources.

“Saturday, April 11th, marked the 75th year of Richter ferry service, a business owned and operated by Carl and Arni Richter, father and son, since 1940. Not to be forgotten in this endeavor were Maggie (Gudmundsen) Richter, and Mary (Cornell), who were also willing to support this new family venture in its early days, before it could support them.”

Carl Richter was 69 and Arni was 29 when they bought the ferry line in 1940. Purinton detailed the purchase in an interview with Arni Richter published in Over and Back:

“We bought the Ferry Line from Mr. William Jepson in 1940. We had operated the little Welcome [a tug] continuously since 1931, carrying mail, freight and passengers until April 11, 1940, at which time we bought the Line. I sold Mary’s (wife Mary Richter) new Ford V-8 automobile, which she had just bought with her earnings as a teacher, to come up with some of the cash needed in the purchase. The deal included the ferries Welcome, North Shore, and two snowmobiles, a Model A and a Model T with tracks, the present island dock property, and one-half ownership of the Northport property. Roy Voight owned the other half.”

Purinton continued: “Those early Ferry Line times were often days with long hours, filled with uncertainties over whether the business would provide enough revenue to eventually plan for a new ferry. The war years also delayed this venture by restricting travel for motorists through gasoline and tire rationing, and by making ship materials scarce. Building a new ferry of steel was still a goal, however, to replace the aging ferry Welcome and improve the safety of the winter operation. 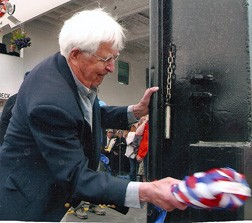 Arni Richter broke the bottle of champagne against the gangway of the newest ferry Arni J. Richter in May of 2003. This ferry was built at Bay Shipbuilding in Sturgeon Bay and was designed by Tim Graul Marine Design, also of Sturgeon Bay, for all-season use, including ice breaking.

“This goal would not be met until 1946 with the building of the Griffin, but even then, obtaining the financial support for such a project proved difficult.”

Today the fleet consists of the Eyrabakki and the three ferries that came after it. Each ferry can carry 150 passengers and 18 to 21 autos.

“One fact of business Arni liked to recite was that each new ferry exceeded in cost the sum total of dollars spent on all previous ferries. This reflected not only the nature of new construction, with increased complexity in safety equipment and design features intended to meet U.S. Coast Guard regulation, but also the tendency to improve each new ferry in size and utility. With increased size came increased horsepower, and larger transmissions, all with added cost. Each new construction contract was supported with the optimism that it would prove to be the right decision, and that a new ferry would help to sustain, if not increase, business for the Ferry Line and the Island.”

And that, Purinton maintains, is what it is all about.

“I have a special fondness for this place I call home, where my talents are needed and bonds are strong,” Purinton wrote in Words on Water. “This passage filled with water separating the Door Peninsula from Washington Island that we call Death’s Door requires ferry service and people to run the ferries. This is what we do. The water and our ferries define our community, and to a great extent, who I am.”

Look for more from Dick Purinton on the 75th anniversary of the Washington Island Ferry Line in the winter 2015 issue of Door County Living.