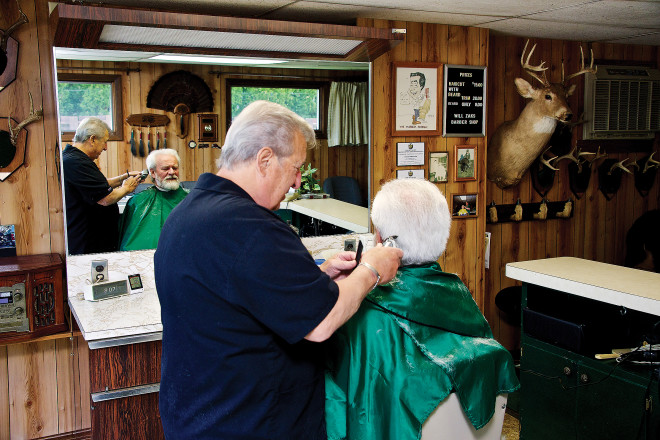 When Willard Zak was a little boy, he hated getting haircuts. “I’d almost run away from home to avoid it,” he said. His father, who had to drop out of barber school during the Depression, cut his children’s hair, and as Willard grew a little older, he had a change of heart, deciding it was a career that may interest him. 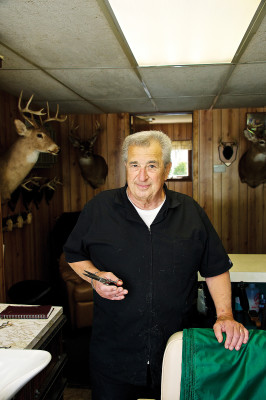 In 1963 he studied barbering at the Green Bay Vocational School and spent the next five years working in a shop in Sturgeon Bay to complete the requirements for his license.

He and Sally Koepsel were married in 1967, the same year Willard’s mother died. His dad sold the family home, across from the Baileys Harbor Post Office, to the young couple, and they converted the garage into a barbershop.

Sally remembers the exact date it opened for business – December 11, 1968, just a few weeks after their older son, Brian, was born. The cost of a haircut in those days? Two dollars – still a bit more than the proverbial “shave and a haircut, six bits.”

Most of his customers in the early days were locals. Now the majority are seasonal visitors, as older clients have died or moved to Scandia Village in Sister Bay. An exception is 94-year-old Gardner Orsted, who refuses to get his hair cut by anyone else. His daughter continues to drive him from Scandia to Zak’s when he needs a trim.

Gary Nelson, owner of Nelson’s Shopping Center in Baileys Harbor, is part of a younger generation of Zak’s customers.

At one time, Zak accepted women customers, but it didn’t work out. “I work by appointment only,” he said, “and cutting women’s hair slowed everything down.”

He used to give shaves, too, but like many other barbers, he stopped a long time ago. 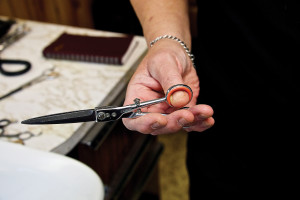 Zak’s shop is one of the few places in Baileys Harbor that’s open almost year round, although he closes on Saturdays during the winter, and for the last five years he and Sally have spent March in Kissimmee, Florida.

Along with being a Baileys Harbor businessman for 45 years, Willard has been heavily involved in other aspects of town life. Both he and Sally are longtime members of the Stella Maris Parish. From 1974 to ’79, Willard was the town treasurer, a job he describes as “not very exciting.” Sally adds, “Taxes were paid, not at the courthouse in Sturgeon Bay, but at Zak’s Barber Shop. They were all due at Christmas time, and all the receipts were handwritten.”

Many wives grumble when their husbands retire and are suddenly “underfoot” 24/7. Sally, a fifth-generation descendant of Increase Claflin, the first white settler in Door County, has never minded that her husband has always “commuted” 10 feet from their kitchen door.

“Actually, I was the one who worked outside the home,” she said. “I was part of the shipyard industry in Sturgeon Bay for more than 25 years, and I’ve also kept busy with cooking, baking, canning and a special interest in my flower garden. I was a Koepsel girl and started their farm market when I was 10. Willard and I both grew up with a strong work ethic and instilled that in our boys.” 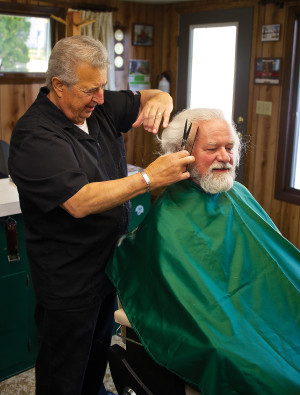 Snipping in the ‘Doghouse’

My daughter usually gives me a haircut once a year, whether I need it or not, but she’s a busy young woman about to be married, and the mop was getting a little more unruly than usual, so I decided to go to Zak’s Barber Shop.

It had been decades since I’d been in a barbershop, and I guess I was expecting the barbershop of my childhood, with bottles of bay rum and various other manly unguents, ointments and talcum powders. But all that was from back in the day when men visited barbers not just for a haircut, but also for a clean, close, hot-towel shave with a straight-edged razor.

Willard Zak hasn’t done razor shaves since the 1980s due to the increase in insurance rates when AIDS hit these shores, so you won’t find any of that stuff in his barbershop. The only noticeable nod to the barbershops of days gone by is the tall jar of blue Barbicide (an EPA-approved disinfectant) filled with combs.

And, of course, there is Willard himself, an affable man who puts you at ease with easy banter. “I like meeting people,” he said.

His shop on steep Bluff Road in Baileys Harbor is a converted garage that Willard refers to as his “doghouse.” The shop walls are filled with Willard’s hunting trophies, including a collection of mounted turkey beards. There are also photos of Willard and his family hunting and a plaque from the Town of Baileys Harbor in appreciation of Willard’s 36 years of service as a volunteer firefighter. 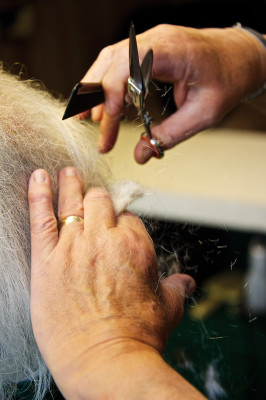 Asked to name his favorite tonsorial tool, Willard chooses his scissors. He prefers them to the electric clipper. “I guess if you were just giving buzz cuts the clipper would be OK,” Zak said, “but I just prefer the scissors. That’s how I was trained.”

Zak’s Barber Shop has long been a community gathering place for locals and summer visitors, but Willard said with his aging customer base and the advent of unisex hair salons that has the younger generation of men shunning barbershops for hair salons has slowed down the visits to his shop.

“Things have changed so much,” Willard said. “But I’ll keep doing this until I can’t.”

Perhaps to the relief of my daughter, Willard Zak has made a customer out of me. I might even visit him more than once a year.