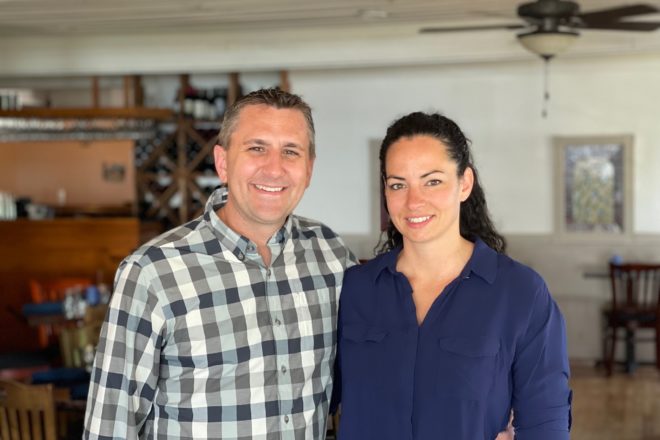 As of June 16, Scott and Sarah Bennett are the new owners and operators of the Harbor Fish Market & Grille in Baileys Harbor. Photo by D.A. Fitzgerald.

The Harbor Fish Market & Grille in Baileys Harbor, situated on the shore of the Lake Michigan side, boasts expansive indoor and outdoor dining with coveted views. Inside, customers walk on the original hardwood floors that were installed when the building was constructed in 1908 and belly up to the original bar that fronts Highway 57 and is capped with the original copper ceiling.

The restaurant’s quintessential Door County history and waterfront charm also come with a successful track record, created in part by its signature lobster boil. And it’s now all the property of Scott and Sarah Bennett, the new owners and operators.

The Bennetts closed on the property June 16 and will live in the apartment above the restaurant with their two girls, aged 10 and 8, who are both preparing for Gibraltar schools in the fall.

Scott and Sarah have only been at it for a month, but already Sarah has noticed a marked difference between being a restaurateur and a corporate employee.

“It’s been a lot of pivoting and creative problem-solving,” she said. “It’s fun. I haven’t been able to use my brain like this in a long time.”

Scott, too, is learning that he’ll have to pick up the Jack-of-all-trades quality that comes with owning and operating an old restaurant, bar, custard shop – and 500-gallon lobster tank.

“We do a lot of lobster,” Scott said.

“It’s flown in from Maine and trucked up from Milwaukee,” Sarah said.

The lobster idea comes from the previous owners, Carl and Karen Berndt, and Karen’s Connecticut roots. They began considering selling the property about 10 years ago, Karen said. Still, it was easier said than done, and the establishment was not on the market when the Bennetts expressed their interest.

“We’re not a little diner on the corner,” Karen said. “We had 53 employees; served breakfast, lunch and dinner seven days a week; and had a custard shop.”

The Harbor Frozen Custard shop, which houses employees on the second floor, is attached to the restaurant building, and will reopen next season. The Bennetts are also ramping up their staff, currently at 40 employees, and hope to bring back the breakfast service. In the meantime, they’re doing a menu refresh so they can still offer some of the more popular breakfast items. Produce from local farms will also be featured on the menu with seasonally prepared foods.

“We’re encouraging the kitchen staff to take some chances and be more creative with things they want to try,” Sarah said.

For now, they’re open for lunch and dinner, seven days a week. If they can find the staff, they’d like to stay open year-round rather than closing for the season in October.

Scott and Sarah, who grew up in Mishicot and Two Rivers, respectively, came from Sheboygan, where they were working and raising their family. Though they didn’t know it at the time, their careers until that point were preparing them for restaurant ownership.

“It’s clear how we got here, but we never planned how we chose this path,” Sarah said.

Sarah, 38, started her career at Kohler in business and accounting and then switched to The Vollrath Company (cooking supplies and equipment) as its marketing director. Scott, 40, worked in high-end specialty foods at Kohler’s Woodlake Market before becoming a sales manager in the wine and spirit industry for northeastern Wisconsin.

With Scott overseeing the service of his company’s numerous Door County clients, the family began spending a lot of time on the peninsula and purchased a seasonal property in Baileys Harbor. Soon, “like everybody else, we fell in love with Door County,” Scott said.

The Harbor Fish Market & Grille, located about a mile from their seasonal property, became their go-to spot.

“I feel we became part of the family,” Scott said. “It honestly felt like a second home.”

Their journey to making the place their actual home and business began after Sarah graduated with her MBA in May 2020 and broke both of her ankles doing a celebratory flip on the family’s trampoline. The downtime offered an opportunity for self-exploration about her career and what was important to her. What kept recurring was a childhood dream of owning a catering business or restaurant.

Scott eventually came on board with the idea, and the only place that seemed to be a natural fit was the Harbor Fish Market & Grille. It wasn’t for sale at the time, so Sarah said it took courage to start the conversation with Carl and Karen Berndt, who purchased the restaurant – the former Frontier Saloon – in 1998.

“I asked the question, and they said, ‘We wouldn’t sell it to anyone else,’” Sarah recalled Karen saying. “This felt like a safe risk to us.”

“She has an MBA; he knows the industry,” Karen said. “They’re young and passionate. You can teach a lot of stuff, but you can’t teach passion.”

That first conversation began in October 2021. Eight months later, the Bennetts had the keys to the building.

Carl is currently in Cartagena, Colombia, living on the couple’s sailboat, but Karen lives in Baileys Harbor and agreed to stay on as the Bennetts’ employee, working primarily as a kind of consultant during the transition.

“They’re going to make this into a great business,” she said.