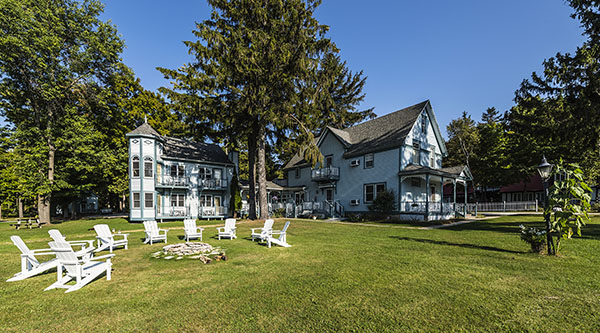 Two beautiful victorian structures and a lighthouse suite overlooking the fishing docks of Gills Rock give the Harbor Light Inn a distinctive look in the quiet village at the tip of the peninsula. Photo by Len Villano.

The “painted lady” Victorian in Gills Rock is just as regal today as it was in 1904 when Willy Weborg built it for his bride, Olga, who demanded only the best. They regularly opened their large home to travelers from Chicago who arrived by schooner at the dock they owned nearby.

Today, the blue house with white trim is the centerpiece of Harbor Light Inn. For many of its 114 years, it has been a bed and breakfast, much of the time operated by the Weborg family.  Former owner Dave Weborg grew up in the house when it was owned by his parents, Wallace and Gladys, and he and his wife, Else, operated it for 17 years. (They still have a large half-timbered home on the property, built by Dave, whose “blueprint,” was a picture on the lid of a tin of Royal Dansk cookies.)

The current managers are Refik and Kubra Ozbek. Refik came to Door County from Turkey in 2007 on a student work visa and will be remembered by many locals from his years at Piggly Wiggly in Sister Bay, where he rose to be assistant manager.

“Kubra and I had a dream of having a B&B, but we never supposed it would be possible to do it in United States,” Refik said.  “This is such a wonderful opportunity for us.”

Refik said that being an innkeeper is a 24/7 job and he cheerfully gets up in the middle of the night when a guest reports there’s no hot water in the shower (even if it’s apparent that the handle was being turned in the wrong direction.) His attitude is similar to Dave’s, who once arose at 4 am to welcome a group of nuns from Chicago who took a wrong turn in Milwaukee and somehow arrived in Ellison Bay by way of Madison.

The Victorian, which once boasted seven bedrooms, has been remodeled to include just four large guest suites — the Garden View, the Northern Door, the Country Door and the Harbor Door — that retain the original wood trim and stained glass windows. 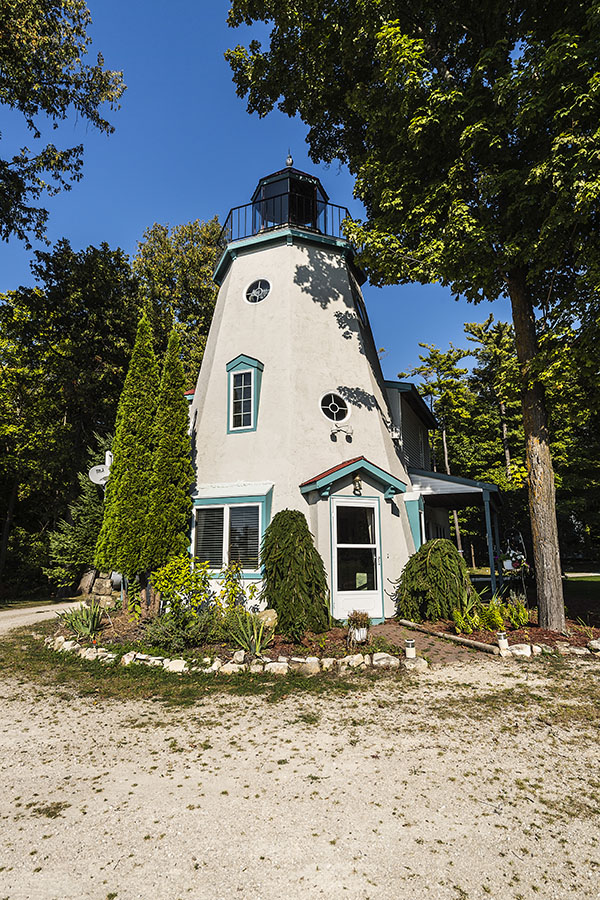 The lighthouse is the most prominent feature of the Harbor Light Inn grounds. Photo by Len Villano.

The newer Scandinavian Country Wing has four nautical-themed suites — the Galleon, the Spinnaker, the First Mate and the Commodore, each with two queen-size beds. The newly renovated gathering space that connects the two sections of the inn includes a full kitchen, a dining area where a continental breakfast is served and a sitting area with a beautiful, hand-carved and painted mantle honoring the area’s rich fishing tradition, the remnants of which are visible on the shoreline across the road. Guests use the facilities for reading, playing games or relaxing.

Other accommodations include a two-story lighthouse built by Dave in the late 1990s with a light on top that in the past was very helpful at night in guiding boats into the harbor across the road.

“I’ve always had a thing for lighthouses,” he said. “We needed space for a new office, and I thought, ‘Why not build a lighthouse?’”

Later, the original first-floor office was converted to the Nautical Suite, while the upstairs is the Moonraker Suite with an outdoor stairway, fireplace, kitchenette and private balcony.

The light atop the structure isn’t functional at present, but Dave hopes to see it restored.

Troll Cottage, set against the woods at the back of the property, was converted by Dave from the former carriage house. It features stove-wood interior walls with two connecting bedrooms upstairs and a kitchen, bath and living room with sofa bed downstairs. There is a large deck, a fire pit and picnic area.

Pets are welcome in some rooms. The buildings are air conditioned, and unlike some B&Bs, all rooms have a double shower or a tub/shower combination. Guests can lounge on the grounds in the picnic area or enjoy the fire pit, where Refik builds a fire each evening and guests gather to watch the sun set over the harbor. It’s his favorite time to get to know people. 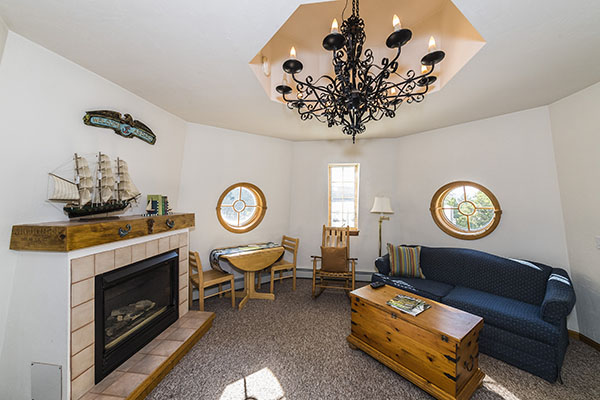 Inside the second story of the Lighthouse suite. Photo by Len Villano.

“Ninety percent of doing a good job is being present and listening,” Refik said.

An authentic Scandinavian sauna is available to guests, next to a gazebo shaded by a 75-foot evergreen tree. It’s an atmosphere of peace and quiet.

“We like to say we’re north of the tension line,” Refik said.

The many shipwrecks in nearby waters make it a popular spot for scuba diving. The Island Clipper Ferry, that takes passengers to Washington Island, is close by, as is the historic Weborg Dock, where fishing boats can be seen daily. It’s a short walk to the Shoreline Restaurant, Charlie’s Smokehouse and Gills Rock Coffee, and 2,373-acre Newport State Park offers trails, off-road cycling and skiing just five miles down the road. 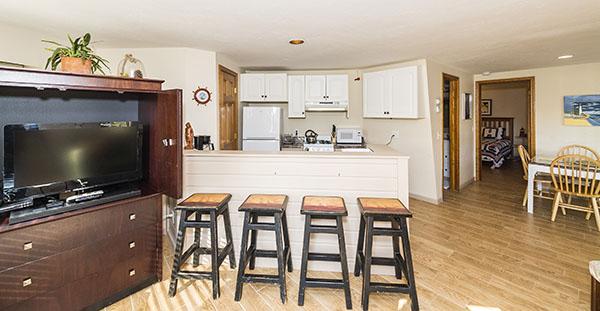