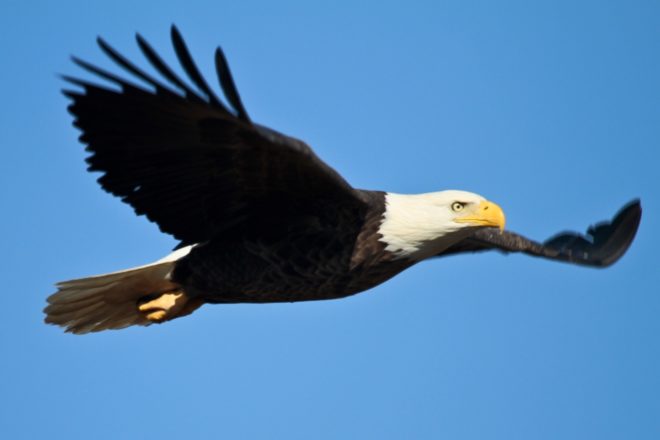 A group of volunteers has been raising money to bring an unreleasable Bald Eagle to the Open Door Bird Sanctuary (ODBS) for its raptor education program.

ODBS Executive Director Rob Hults also announced that today a 30-day matching donation begins thanks to two anonymous donors who have guaranteed a total of $4,000 to the ODBS Eagle Project if a matching $4,000 can be raised by Aug. 12.

The Eagle Project began last fall when a group of hikers took a tour of ODBS and several members wondered why the sanctuary did not have a Bald Eagle. The group asked Hults to come up with numbers to make a home for a representative of our national symbol. Hults said he factored in not only on-site construction for a 600-square-foot aviary for a free-flying eagle, but also food and veterinary costs for the first couple of years, and came up with a figure of $21,000.

“We’re about halfway there now,” Hults said. “And now we’ve had the really exciting news in the last couple of weeks with a couple of anonymous donors getting involved.”

The results of the matching donation will be announced during the ODBS Open House from noon to 4 pm on Aug. 12.

For more information on the Open Door Bird Sanctuary, visit opendoorbirdsanctuary.org. Read more about the ODBS Eagle Project in the next issue of the Peninsula Pulse.