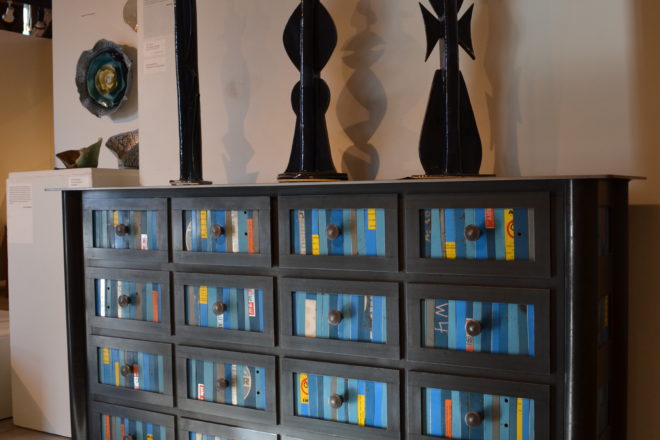 The Hardy Gallery closes its 2016 season with a nod to Germany’s Bauhaus Movement and its influence on American arts and crafts with an all-3D exhibit.

Form Follows Function features 33 artists (31 of whom are from Door County) exploring the crossover between fine art and craft through woodworking, textiles, ceramics, metal, sculpture and bookmaking. 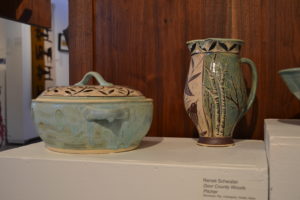 The phrase “form follows function” was born out of modernist architecture and industrial design of the early 20th century and is often linked with The Bauhaus. The Bauhaus, German for “house of building,” was an innovative German art school that sought to unify the arts through craft (combining architecture and fine art in its curriculum), and emphasized the creation of artistic but functional objects.

While the school would have a lasting impact on the approach to education in the arts, its larger influence was on the modern art movement in America. Over the course of its 14 years (from 1919 to 1933), The Bauhaus’ core objectives shifted from unifying the arts through craft to designing objects for mass production. Its most popular offerings included architecture, cabinetmaking, textiles, metalworking and typography.

In the late 1920s, the school’s chairman, Swiss architect Hannes Meyer, faced pressure from the German government for his left-wing views and stepped down in 1930, being replaced by architect Ludwig Mies van der Rohe. Rohe relocated the school to Berlin that same year and by 1933, continued political pressure from the Nazi regime forced its closure.

Sarah Zamecnik, executive director of The Hardy, explained how those events spelled a new era of art in America. 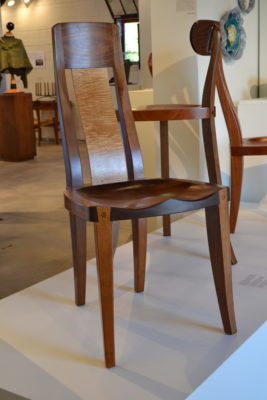 “During WWII, Hitler deemed Modern Art as ‘Degenerate Art’ and sought to abolish this type of art in Europe by stealing, burning and even burying both Impressionist works and modern art – ‘ism’ movements (i.e. Realism, Fauvism, Cubism) from artists, private collectors and museums,” she said. “Hitler went as far as having an exhibit entitled ‘Degenerate Art Exhibit’ to showcase these new styles of art and show the public how disgusted he was of this new form of art taking place in Europe. He was also responsible for closing the Bauhaus School of Art during this time. During the war many artists fled to different, safer parts of Europe but also New York City. Because of this, New York became a major player for the 20th century art world and developed Abstract Expressionism during the 1940s and 50s. It was American collectors in the early 19th and 20th centuries who valued the works of French Impressionism more than Europe who began purchasing these works which ultimately built up the Impressionism collections for major American museums, and why the Chicago Art Institute has some of the best representations of Impressionism works in their collection.”

In 1937, one of those artists, László Moholy-Nagy, founded the New Bauhaus (now the IIT Institute of Design) in Chicago, carrying on The Bauhaus’ original philosophy.

Visitors to The Hardy’s newest exhibition are introduced to these influential approaches to design through a selection of loaned period pieces, including a Stickley Mission-Style Morris Chair, a mid-century Womb Chair (a design by Eero Saarinen) and a stained glass lamp inspired by the design philosophy of Frank Lloyd Wright. 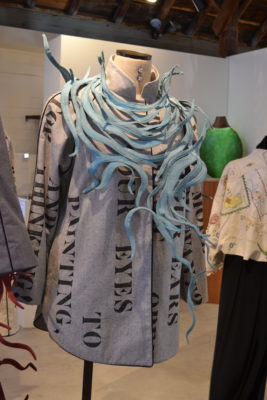 Clothing by Peter Ciesla and Skye.

Zamecnik explained these pieces represent the overall approach to art by those featured in the exhibit.

“We are seeing how craftmakers today are borrowing from the historical context and how they’re developing their work,” she said.

“The secondary title is ‘The Intersection of Art and Craft,’” she added. “So we’re showing, how does fine art play with craft and how does craft play with fine art? Sometimes when you say craft, it’s not a nice word for art speak. Artists typically do not like the word craft because it’s always associated with consumer end works like the craft projects you get at the store and it’s always got that bad connotation. What we’re trying to show you is what real craft with real handmade objects looks like and we’re playing with that through not only stuff that would be considered more high-end art but we’re also playing with that with stuff that would be considered high-end craft that is very artistic looking.”

From artist Jim Rose’s “16 Drawer Counter,” inspired by Gee’s Bend patchwork quilts, to Bob Merline’s “Point Eleven,” a sculptural piece created from found branches, bone and wire, all the way to Jeanne Aurelius’ pottery and Michael Doerr’s handbuilt wooden furniture, Form Follows Function is a representation of the furthest reaches of the intersection between art and craft, and the many ways Door County artists interpret that through their medium of choice.

Form Follows Function is on display through Oct. 9. The Hardy Gallery is open Thursday through Monday, 10 am – 5 pm daily (12-5 pm on Sunday) and is located on Anderson Dock. For more information, call 920.854.2210 or visit thehardy.org.