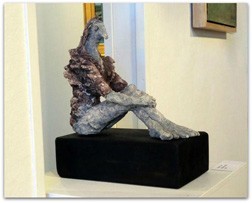 The People’s Choice Award went to Dan Anderson for “Cairn with Candles.” The public was invited to cast a vote for their favorite work during the weeklong Wall-to-Wall Salon; 615 votes were cast.

Recipients of a Juror’s Award were Donna Brown for “Tranquility,” Liesbeth Fickes for “ Meditating Chicken,” and Jim Maronek for “ St. Kreditus.”

“Tranquility” was created out of oil and cold wax on paper. According to Brown, “You can explore the subtle shadows of the fields and, as the light changes, the colors and patterns before you change as well. There are discoveries to be made as you slowly walk to where you can look beyond.”

“Meditating Chicken” is a ceramic sculpture. Fickes says, “I like my sculptures to have an element of surprise – with their own logic.” 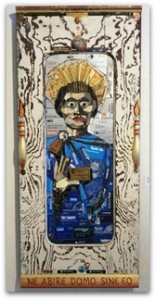 “St. Kreditus” is a mixed media collage, and according to Maronek, “As a collector of everything you could imagine, and some things you could not, it is natural to incorporate the surplus into a collage. Contrary to the casual observer’s opinion, my studio is not cluttered; it is a chock-a-block full of inspiration waiting to be recognized.”

The last award was the Francis H. Hardy Watercolor Excellence Award, which went to Gary Hanks for “Rock Island Light Far-Distant.” Hanks states, “For me light is magical, having the power to lift the spirit and move the emotions. Light is mystical and illusive; its absence can be as intriguing as its presence.”

The Hardy received 135 submissions and 75 pieces were selected into the exhibit, which also includes the work of the jurors. The exhibit will be on display through July 14 at 3 pm.