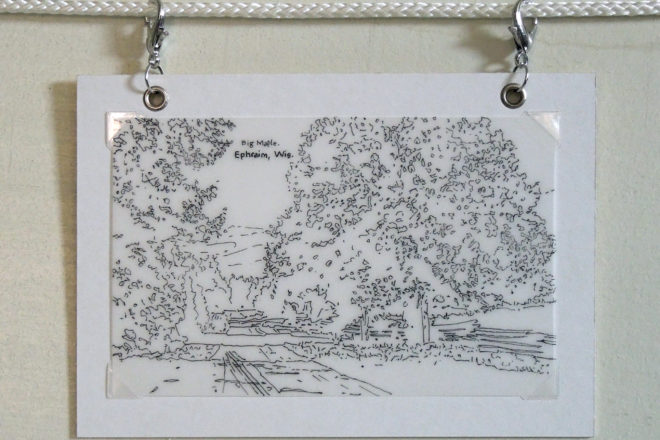 Carol Emmons reduced vintage postcards down to line, abstracting the photo into a collection of lines.

Like summer foliage, Door County’s art galleries unfurl for the warm months of the year. They come gradually at first, multiplying their showings in the spring and early summer, and climax in a show of color and change as the season ends.

True to this pattern is the opening of the Hardy Gallery’s final exhibit for the season, Making Marks /// Making Meaning, opening Sept. 1.

The group exhibit presents artists’ work as it progresses from initial idea and sketches to a finished product, making a statement of the relevancy of the ancient practice of drawing in a modern, hyper-technological world. Designs are displayed next to sculptures and images of Door County houses, time-lapse video shows an artist’s still-life process in action, pencil marks on a canvas show the steps leading up to twisting caps off of paint tubes.

One piece stands out as having taken a different approach.

“My relation to drawing is not typical.”

Carol Emmons’ piece Lineamenti speaks to how drawing can be used to influence the way we view the world. Comprised of tracings and drawings of postcards depicting turn-of-the-century Ephraim, along with renderings of the abstract notions of direction and mariners’ winds, the installation examines the ability of mark-making to bring opposing ideas together in harmony.

“To mark is to delineate, but also to place,” she said in her accompanying statement. “We use line both to represent the world and to carve it up.” 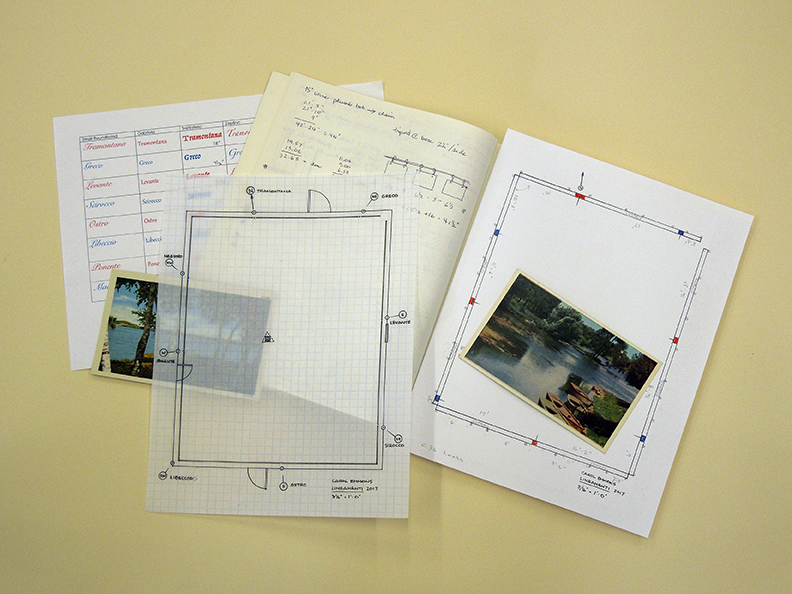 The beginning of an architectural drawing of Emmons’ piece along with the subject matter of the installation.

Emmons, a retired professor of art who taught at University of Wisconsin – Green Bay, specializes in site-specific installation pieces that use the display space to anchor her artwork in physical and cultural context.

“The [Hardy] gallery is in a way kind of a vessel. It’s almost a little boat itself, but it’s also a building, so it’s in this odd zone between things. It’s not really water, it’s not really land.”

Emmons begins her work much as an architect would go about designing a space, using drawing to develop her ideas. She explores the space and the concepts she has to work with by sketching and writing out terms. She visits the sites to find aspects of the building or space that gives her something to work with.

Often an object ends up being the “key” to a project Emmons pursues. This time, it was postcards of Ephraim from the early 1900s.

“They [the postcards] become historical objects, again occupying a peculiar position which is on the one hand very personal in some of the messages, but also full of all kinds of tropes,” Emmons said. “None of them say, ‘wish you were here,’ but they border on that.”

While most of the artists in the show will lay out their process, allowing visitors to witness the dynamic progression from sketch to fully realized product, Emmons’ piece serves as an unmoving anchor for the entire show, with the tracings and drawings strung along the fascia boards on the walls around the gallery. Her piece acts as a web for the other selections to rest on, mirroring the juxtaposition of personal and collective that arises out of the messages written on the postcards. 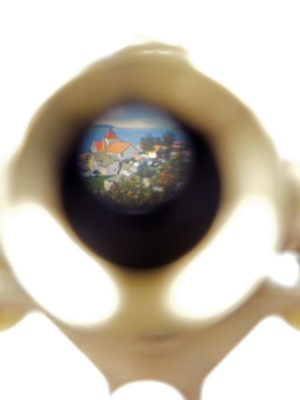 Perspective of a postcard through the viewing scope, which is centered in the middle of the exhibit.

True to the theme of the exhibit, Emmons’ piece and the concepts behind it encourage the viewer to see the world with an artist’s eye.

“Objects in the world don’t come with outlines like they do in the comics,” she said. “So the paradox of representation is that to make the most believable illusion of something is actually a matter of finding sets of really abstract marks that will evoke that [thing]… It’s a very peculiar, magical thing that you can make a set of marks and people will take it as real.”

Emmons left me with a quote from the 20th century Jewish-French Philosopher, Jacques Derrida:

“What I prefer, about postcards, is that one does not know what is in front or what is in back, here or there, near or far, the Plato or the Socrates, recto or verso. Nor what is the most important, the picture or the text, and in the text, the message or the caption, or the address.”

Making Marks /// Making Meaning opens Sept. 1, and runs through Oct. 15. The Hardy Gallery resides at 3038 Anderson Lane in Ephraim, and is open 10 am – 5 pm Moday through Saturday and 12 – 5 pm Sunday. For more information visit thehardy.org.