Harlie Busch, a fourth grade student at Southern Door, came up with an idea this past February to help the homeless in Door County. At first, her parents, Mike and Pam Busch, thought it may be a phase. However after months of her talking about it and saving up items for the event, they decided she was serious. 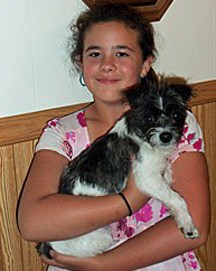 Harlie and Pam wrote a Youth as Resources grant and submitted it to the Door County Community Foundation. This past May, Harlie’s idea became real when she was awarded the grant to be used for event expenses up to $250.

What spurred Harlie’s idea to do a fundraising event such as this? This past December, Harlie volunteered at the Family Center of Door County’s Christmas Store. As she helped someone wrap gifts she became concerned for their wellbeing. On the way home Harlie asked her mom questions about how people can get food. Harlie told the story of the person she helped that evening and how thankful they were to get Christmas presents for their family; however, their next worry was to get food.

The next thing Harlie observed was a homeless man who was on the road by Walmart. As she ate at Subway, she wondered what the person does in bad weather, how they get clothes and what they eat? It was soon after when she came up with an idea to help the homeless.

Harlie’s Help the Homeless Event is planned for Aug. 24 from 11 am to 3 pm at the Sturgeon Bay YMCA’s back pavilion area. The goal is to raise food, personal hygiene items and money that will be donated to Lakeshore CAP and Feed My People. Both agencies will be at the event to raise awareness of their services.

In addition, there will be silent auction items, games, a cupcake walk and bake sale. Harlie will also offer food and beverages such as brats, burgers, soda and water that was donated by Tadych’s Econofoods. Admission to the event is a donation of a nonperishable food item, personal hygiene product or cash donation.

Once admitted, attendees will have the opportunity to grab a bite to eat or purchase tickets to play games and win prizes. Games are for children and adults. In addition, donations are being received at this time and will be offered as silent auction items.

How can the community help Harlie to make this event a success?

• Donations are welcome for game prizes and/or silent auction items

• Spread the word about the event – tell friends and neighbors

• Volunteer to help at the event in set-up, operating games, helping cook, and cleaning after the event.