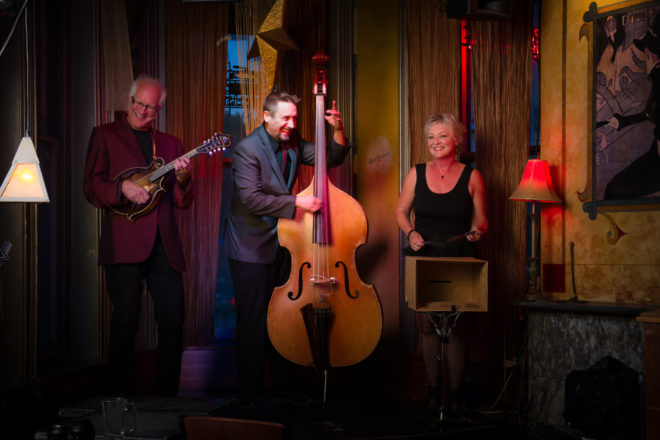 The Gypsy jazz band Harmonious Wail will perform at Fish Creek’s White Gull Inn on Feb. 28. The concert is the fourth in a six-piece series in the inn’s 34th season of winter folk concerts.

Harmonious Wail, a band who describes itself as a “purveyor of Americana infused Gypsy jazz,” just celebrated its 30th anniversary and continues to take listeners on a ride ranging from the music of the club sounds of Paris to the deepest blues of the Memphis Delta to the folk scenes across “every town” America.

Harmonious Wail consists of Sims Delaney-Potthoff, mandolinist, bandleader and vocalist; Maggie Delaney-Potthoff, vocalist whose percussive instrument of choice is a cardboard box, but who also has a knack for exploring the musicality of almost any household object; and Jeffo Weiss, bassist who rotates between upright and electric bass.

The band has 10 recordings to date, the three most recent having been submitted for Grammy nomination consideration. Besides being a touring band, Harmonious Wail has a long relationship with National Public Radio. Their songs, “People Stuff” and “I Like to Feel My Bones” both have received International Songwriters Awards, and four of their Gypsy Jazz compositions were woven into the film score of the independent film, I Really Hate My Job.

The concert will be preceded by an optional fixed price dinner served at 6 pm. The menu consists of beef bourguignon served over mashed Yukon gold potatoes; French bread; kale salad with roasted squash, apples, pomegranate seeds and maple citrus dressing; and flourless chocolate cake. Tickets for the 8 pm performance are $20.