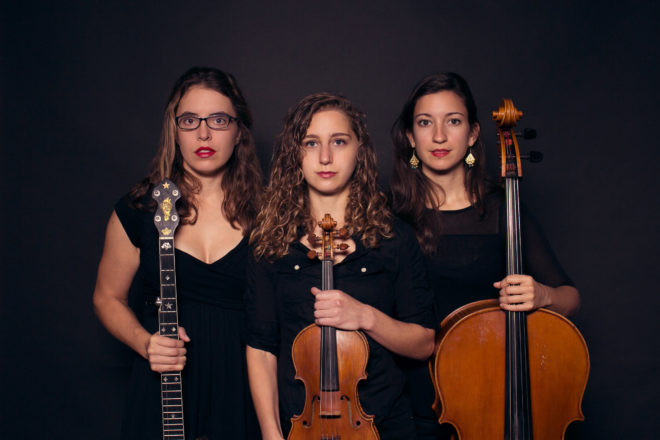 Harpeth Rising is a trio of classically trained musicians who’ve mastered blending genres between folk, classical, newgrass and rock, creating their own version of chamber-folk. Their latest album, 2017’s Against All Tides, comes with a great message – that at a time when the state of things don’t seem quite right, they will continue to push back against all tides.

As told by their website bio, the trio is made up of Maria Di Meglio on cello, Michelle Younger on banjo and Jordana Greenberg on violin. They all earned classical performance degrees after their studies and grew up listening to different versions of folk and classical music.

Their shared interests during childhood and beyond are likely the reason why they sound so tight-knit (besides their musical education backgrounds). Their harmonies are perhaps the greatest showcase of that. There seems not to be one misplaced note, vocally and musically – the album is full of intention.

The album’s opening song, “Love Child,” sets the tone for what’s to come. The song opens with a banjo riff, quickly followed by a three-part harmony. Minor chords are chosen to give the song a dark feeling and there’s almost an attitude to it.
Eventually the instruments drop out, shining a light on the vocal harmonies. It creates a moment of tension, reaching the song’s peak once the instruments drop back in.

These twists and turns are what keep this album fluid and flowing. The melodies have a lot of movement.

“535 (Are You Even Alive)” is a good testament to that. It also has quite a set of snarky lyrics. I can only speculate that they reference our current president, but they say things like, “Hypocrisy rains while democracy wanes,” and “While you’re on vacation, ignoring the nation,” among the claim that change is going to come.

Perhaps the most interesting song on the album is its closer, “Lucid Dreaming Sheep.” It’s much more rhythmic than the others. A lot of the song is vocal harmonies over percussion and nothing else, and these harmonies aren’t conventional. They seem unexpected, but calculated. It’s very layered, with an intermission for only instrumentals.

Overall, Against All Tides is a reminder of who Harpeth Rising is, and is a continuation of their previous work. What’s new here, is their declaration that “human connection is the ultimate force for good in the universe,” and presenting lyrics that align with that message.