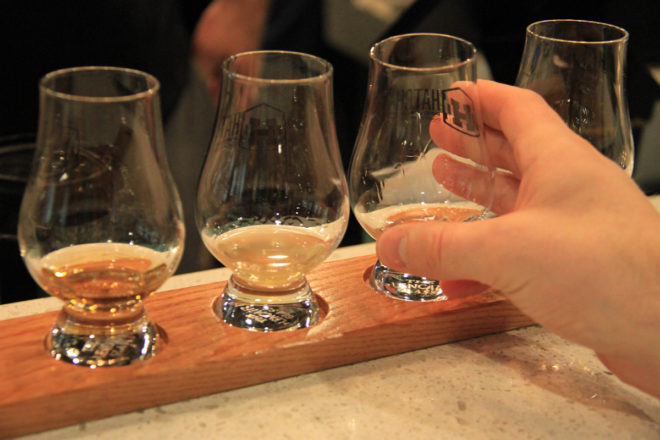 Hatch Distilling Co. in Egg Harbor has been nominated for USA Today’s 10Best Readers’ Choice Award for Best New Craft Distillery. The Egg Harbor company celebrated its two-year anniversary this year, and owner Chris Roedl is thrilled to hear about the nomination.

“It’s exciting to be included in a great list of nominees,” he said.

Hatch Distilling Co. is a team of distillers, beekeepers, farmers and foragers who are pushing the boundary of what “craft” can and should be. Hatch specializes in clear spirits made from 100 percent honey, and whiskeys made from local heirloom grains.

“Our gin ranked high in a peer-reviewed American Craft Spirits Association competition last year,” Roedl said, “and I think that is what put us on the map for getting this nomination.” Hatch is one of 20 craft distilleries nationwide to be nominated for the 2020 award.

As to what sets Hatch apart from other distilleries, Roedl said, “We are one of a limited few distilleries working with honey and doing some of the beekeeping ourselves. We have also really focused our efforts this year on partnering with Door County farms to grow unique heirloom varieties of grain for our whiskey program. Local sourcing is becoming an empty catchphrase these days, but we back that up with significant effort to make sure we craft a taste of Door County terroir.”

Nationwide voting for the USA Today 10Best contest is now underway, and fans may vote daily at 10best.com through Sept. 14, 11 am. (The direct link to vote for Hatch is 10best.com/awards/travel/best-new-craft-distillery/hatch-distilling-company-egg-harbor-wisconsin.) Winners will be announced Sept. 25.