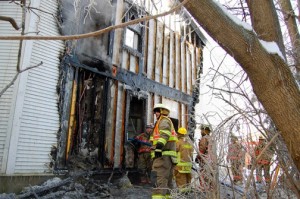 Firefighters extinguish flames on north side of Ephraim Inn. Photo by Jim Lundstrom.

The outside temperature reading in Ephraim Fire Chief Niles Weborg’s car read two below zero when he rolled up to the Ephraim Inn at 7:09 am on Monday, but he wasn’t thinking about the cold. He was thinking about the 10-foot flames shooting out of the roof of the north end of the 28-year-old Inn.

“I didn’t think we were going to stop her,” Weborg said. “Thank god they had a draft stop.”

As the name implies, a draft stop stops air flow (drafts), which prevents a fire from spreading. The Ephraim Inn, built in 1985, came with draft stops. 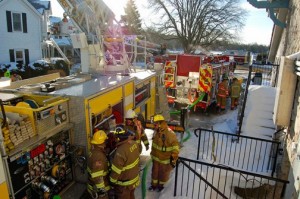 Firefighters from throughout Door County were called to the scene Dec. 30 at The Ephraim Inn. Photo by Jim Lundstrom.

Weborg said the cause of the fire was electrical in nature, but it will take more investigation to pinpoint the exact source.

Weborg said the living quarters of Ephraim Inn owners Tim and Nancy Christopherson, who were out of town at the time of the fire and had the Inn closed for the season, sustained some smoke damage, but said the couple should be able to return to their home without too much trouble.

When all was said and done for the volunteer firefighters from all the Northern Door communities who responded to the morning fire, when they declared all clear at the Ephraim Inn at 3:30 pm, they had saved two thirds of the Inn.

With the bitter cold, Weborg said this is one of the few times when the fellows working inside at controlling the blaze didn’t ask to be relieved by the men standing outside in the sub-zero temperature.

“Hats off to Northern Door fire departments for pitching in. Many hands make light work,” Weborg said. “All the training really pays off.”