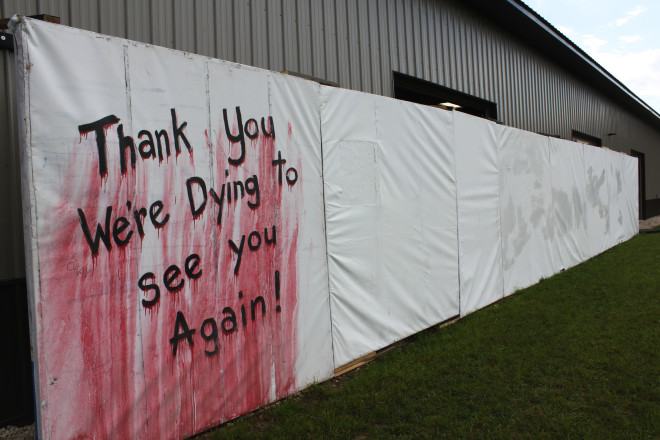 On a picnic table just outside the entrance to Southern Door’s Haunted Mansion, Sue Marchant sits in denim jeans stained with red and white paint the week before grand opening.

“I guess I’m disappointed because I thought we would be all done already and we would have this week to relax but it ain’t gonna happen,” she laughs. “My list is pretty long.”

The Haunted Mansion opened for its 10th year on Oct. 2 and Marchant hopes to see 5,000 visitors sign their names on the Survivor’s Wall if they can make it through one of the state’s scariest Halloween attractions. 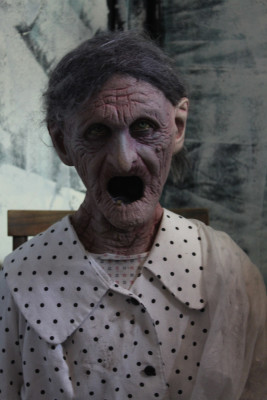 “I think that first year I don’t know if we had 300 to 400 people,” said Marchant. “It just grew from there. My son owns the campground and they went to a campground convention and at that campground they had a haunted mansion. That was in June and in October we opened.”

Marchant admits it wasn’t much the first year, but they used the funds to build a better haunt for year two. After that, they turned their efforts to the Southern Door School District.

“The school was looking for some type of a fundraiser and they brought it to my son’s attention,” said Marchant. “In eight years we’ve given $150,000 to the school.”

Their donations support programs that are struggling with financial support or require families to pay for their kid’s participation in some activities. Activity directors can sign their student group up for volunteer positions. Each hour volunteered translates into a part of the pot when profits from the Haunted Mansion are divvied out. Volunteers can choose which organization they want their money to go to. 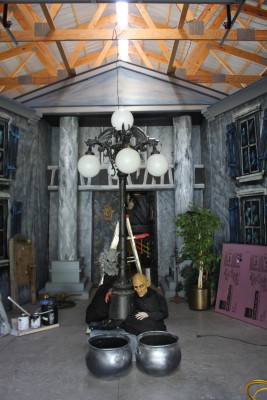 “It might be $4.50 per hour,” said Marchant. “The more you work, the more money your activity gains. This year we’ve got the fourth grade class. They are trying to raise money so that all of the kids in the fourth grade can go on the Madison trip.”

Marchant is always amazed at the far reach of the volunteers that do show up to help out, including 15 schools stretching from Northern Door down to Green Bay.

But grateful as she is for the help, Marchant is worried about securing enough volunteers to make the month run smoothly. Together with Judy Jesse, the two primary workhorses throughout the year are pushing their 70s and Marchant doesn’t know how many more years they have.

“I don’t see anybody coming forward and taking over what I do and what Judy does. We have thousands of hours in already,” said Marchant.

The haunted conventions in St. Louis and the look on the faces of children and adults as they creep around the mansion bring a level of excitement to the fundraising, but with fewer volunteers showing up to help out, the group hopes they can survive their own growth.

Jerry McArdle has helped on odd jobs around the Haunted Mansion since it started. He walks through the narrow corridors of the mansion knocking on the wood to see if it can hold a crooked mirror and wondering how the ghoulish grandpa can retract on a steel slider automatically.

“It’s hard to get the volunteers anymore. Especially from the school. At first there was a lot of people but it’s hard to get any new ones and the ones that have been working on it for 10 years are still working on it. And as this thing grows, you actually need more people. You’ve kinda outgrown your shoes,” said McArdle.

“Everybody is so busy,” said Marchant. “Whether it’s vacations or… the kids are in everything in school, whether it be band or football or soccer, cross-country, there’s so many things going on right now that it’s hard.”

Beyond the preparation and set-up prior to opening, the mansion needs between 75-100 volunteers each night it is open to run smoothly. Campers at Quietwoods are often happy to help out on Saturday after visiting the mansion themselves on Friday. Attracting all the needed help, which amounted to 6,500 hours last year, is one of the toughest tasks for Marchant and the mansion organizers.

Functioning as a fundraiser rather than a business, local carpenters and tinkerers rely on creativity and resourcefulness rather than a big budget to pull off many of the haunts throughout the mansion. This year, crews had time to put some of the walls on pivots in the ground, allowing them to keep the main infrastructure up throughout the year while still leaving room for the campground to store golf carts during the winter.

“We have some very good people. It’s amazing what they can do,” said Marchant.

Being forced to tear down most of the mansion in the week after Halloween is a tall order following a month of stressful scaring, but Marchant believes tearing it down is the reason they are so successful.

“If you left it up, I think you’d get lazy,” said Marchant. The Haunted Mansion is different every year and Marchant believes being forced to tear everything down keeps things fresh when it’s time to begin again next summer.

“When we close this up, it’ll take us about a week to take everything down,” said Marchant. “The Sunday after we’re finished, we start tearing down. Then about a month later we have a meeting – what went wrong, what went right – and the planning starts right away.”