Chicagoan Mark Hauser took first place in the Door County Triathlon sprint course July 17. The 43-year-old Chicagoan was slowed a bit by choppy water at the start but transitioned to the bike leg with a lead he never relinquished.

“There was a small chop in the swim, and the biggest issue was timing your stroke,” he said. “I had a decent lead after the swim, then they almost caught me on the bike before I pulled away in the run.” 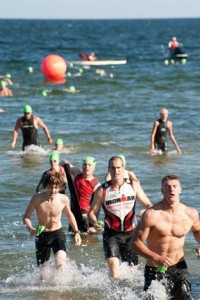 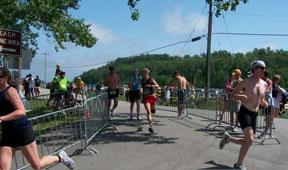 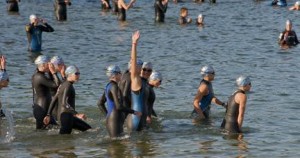 Hauser has participated in the event five times and competes in a handful or triathlons each year.

Padra Meyer of Des Plaines, IL won the women’s division. A 40-year-old mother of five, Meyer finished in fourth place last year and praised the rural qualities of the course.

“It’s such a smooth course,” she said. “In Chicago you’re dodging pot-holes, but this was perfect.”

Third place overall finisher Jeff Paul of Le Claire, IA was in rough shape in the transition from the bike leg to the run. He had barely exited the transition area when he cramped up. 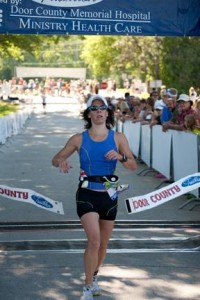 “I cramped bad,” he said after the race. “I thought I might have to stop. Earlier I got a cramp in my lower abdomen.”

Paul, 30, had to stop and stretch, and when he got his legs moving again, he ran stiff, like a man with serious back pain. But by the time he hit the finish chute, he was cruising in full form.

“After about a half mile I got into a pretty good rhythm, and by the end I was running about a six-minute pace,” he said.

Paul, who won a Half Ironman in Austin, TX in October to earn his professional license, had surgery on his achilles tendon in late April. The Door County Triathlon was the first of the season for the eighth grade history teacher, and he’ll do the swim and bike legs of the Half Ironman Sunday. This is his first time visiting and competing in Door County. 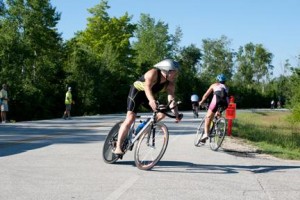 Mark Hauser is first off the bike.

“It’s right up there with the top races that I’ve done,” he said. “The scenery and the fans were awesome.”

He said it was the choppiest swim he’s ever experienced, but it’s experience he said he will need when he competes in triathlons with ocean swimming in the future.

The Door County Triathlon was launched in 2005, and this year attracted nearly 1,000 participants in the sprint course, and another 1,000 competed in the Half Ironman course on July 18.

The Half Ironman also takes place at Murphy Park and begins at 8 am Sunday and includes a 1.2-mile swim, 56-mile bike ride and a 13.1-mile run to cap the day.