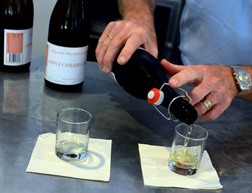 With a steady hand, Mike Bahrke, sample purveyor and employee of Island Orchard Cider, pours crisp, golden cider – hard cider that is – in small clear glasses lined up one beside the other.

The bare, modern space of the Ellison Bay cider house offers an atmosphere ideal for focusing on the tangy, lightly carbonated tastes swirling over your tongue.

After noting the dates of our IDs (the cider contains 7% alcohol), Matt Ledger and I cheers to our first taste of Island Orchard Cider’s 2012 ciders. There is the Brut Apple Cider, Brut Apple Oak Aged Cider, Bright Apple Cider, Apple Pear Cider, and Apple Cherry Cider.

“You can’t open up a place in Door County without cherry-something,” laughs Bahrke.

“Oh, this is sweet,” I say about the Bright Apple Cider – my favorite, while Ledger calls the Apple Cherry Cider his.

We taste, nod, comment and mull over an array of adjectives to describe each one, all created from locally produced fruits in house. Bahrke leads us to the fermentation and bottling room – where Italian-made processing tanks do their work.

“There are a few people who want to come in and ‘talk shop,’” says Bahrke, “others just want to taste the cider.”

“The idea [for Island Orchard Cider] came about 15 years ago when Yannique Purman was in her home country of France drinking hard cider and thought, ‘Wouldn’t this be great in Door County?’” explains Bahrke. Purman and her husband, Robert, who reside in Milwaukee, planted 1,000 apple and pear trees on Washington Island. They began with 22 apple varieties, which were just recently ready for making into cider.

“There is a resurgence of hard cider,” says Bahrke. “Hard cider was the real drink over here, back in the 1850s, then the Germans came with their beer making.”

Beer beware, there is a new drink in town – think dry sparkling wine or champagne, chilled, light and refreshing.