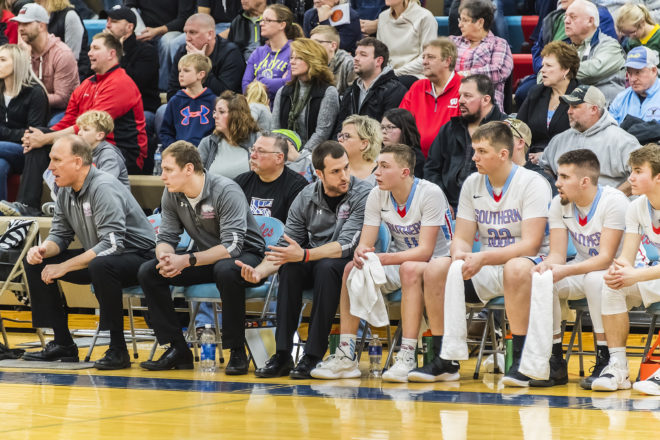 Hawkey said two situations led to what was an extremely tough decision. The first is the 80-minute round trip commute from his home in Green Bay to SDHS, and the second is the fact that he is pursuing a full time job.

“Not working at the school makes it financially straining to coach,” Hawkey admitted. “With a full-time job and commuting I couldn’t do it anymore.”

“My initial reaction was sadness because it’s the ending of a great era he started, but I’m just happy I got the opportunity to play for the one of the best to ever coach the game around here,” said senior forward Kyle Daoust.  “D Hawk had a special connection with everyone in different ways, and he was always the glue that made our tight basketball family stay together.”

Southern Door Athletic Director Korey Mallien said the job has been posted internally and it soon will be posted externally. Mallien added that his goal is to fill the position by the end of the school year so the new coach can plan the summer schedule.

“We’re going to miss Coach Hawkey,” Mallien said. “He had a great rapport with the boys. He was like a big brother to them.”

Hawkey said he is thankful for all of the people who made his stint with the Eagles enjoyable.

“It was very hard because I’m leaving after three great years and a program that has won the Packerland Conference five straight years,” said Hawkey, who was a standout player for the Eagles. “I’m going to miss the administration, parents and obviously the kids the most. Working with the kids by far will be what I’ll miss the most.”