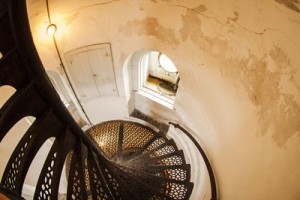 A contract has been awarded to test Cana Island Lighthouse for lead-based paint and asbestos before restoration work.

The Door County Airport & Parks Committee is now waiting for the other shoe to drop in connection with the Cana Island Lighthouse Restoration Project. At its monthly meeting on March 7, the committee approved awarding a contract for $2,200 to NorthStar Environmental Testing of Mosinee, Wis., to test the buildings for lead-based paints and asbestos.

Airport & Parks Director Erik Aleson said four bids were submitted for the project, ranging from NorthStar’s low bid all the way up to $8,000. NorthStar not only came in with the low bid but also got an endorsement from restoration project manager Immel Construction, Aleson said.

Committee member and county supervisor Ken Fisher asked Aleson if he had an estimate for work needed to remove whatever hazardous materials are found at the old lighthouse. Aleson said it was premature, but Immel had provided him with a worst-case scenario figure of $213,000. “I was a little shocked to hear that,” he said.

But he believes since the lighthouse tower itself was stripped down to bare metal in the 1980s, and lead-based paint was banned in the 1970s, the tower shouldn’t be a problem. He said most of the work will be in the lighthouse keeper’s residence.

In other matters, the committee:

• Heard from Pam Wegner, chair of the Egg Harbor Bird Committee, on a proposal to pursue Bird County status for Door County. She cited a recent Wisconsin Department of Natural Resources report that found Wisconsin is No. 2 in the nation for birding. “Practices that are helpful to birds are also helpful to humans,” she said. She also pointed out that birders typically leave a lighter environmental footprint than other tourists and, generally, have more money to spend. “I think it would be a positive for the county to be involved,” said committee member and county board supervisor Dale Wiegand, to which fellow committee member and supervisor Ben Meyer replied, “It would be a feather in our cap.” The committee voted three to one to support the idea and bring it before the full county board. The sole no vote came from Supervisor Ken Fisher, who said, “I don’t know anything about it.”

• Set a new date for the previously postponed Emerald Ash Borer (EAB) informational meeting. It had originally been scheduled for the Liberty Grove Town Hall on Feb. 20, but an ominous weather forecast caused its cancellation. Wisconsin Department of Natural Resources Forest Health Specialist Linda Williams will be there to talk about the EAB threat to the ash trees in Door Bluff Headlands County Park, where 43 percent of the trees are ash. Once the bugs arrive, they could kill off the ash forest in six years. The tiny Asian imports haven’t arrived in Door County yet, but they have been found in Brown County.

The Door County Parks Department wants to head off an imminent disaster by thinning the ash forest from 43 percent to 20 percent in the park, which would give other tree species the chance to fill in the gaps, give the Parks Department a chance to harvest and sell the timber while it’s still good and save the park from a future where almost half of its trees die.

The meeting will be held 6 pm on Monday, March 17, at Liberty Grove’s Town Hall.

• Discussed plowing in county parks. A parks employee has been plowing eight of the county’s 19 parks this winter, largely to allow access and parking for ice anglers and snowmobilers. But it takes the one employee two full days to plow the areas after a snowfall. Parks Director Aleson is going to come up with some other options, including finding prices for private contractors and the County Highway Department to the do the work.