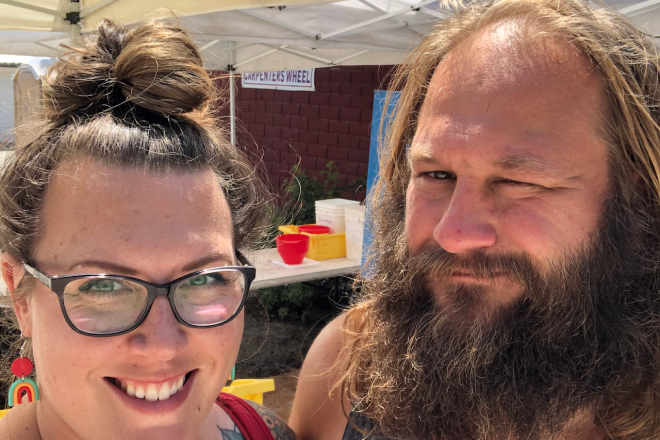 “Credit cards,” Skipp Robertson answered immediately when asked whether he’s done anything differently since taking over his family’s orchard.

He officially bought Robertson Orchards from his father, Kris, in January 2020, making Skipp the fifth generation to own the land. Although accepting credit-card payments may not seem like a big deal, in a family business that gets passed from one generation to the next, it showcases the ways in which such businesses evolve, even as they honor their roots.

Robertson Orchards, 2575 S. Shiloh Road in Sturgeon Bay, dates to the late 19th century. Skipp’s great, great-grandfather, Mikkel Rasmussen, emigrated from Norway in 1872. He was a carpenter who originally worked in Chicago, helping to rebuild the city after the 1871 fire. Rasmussen later moved to Door County when he was hired to help build what is now the Sturgeon Bay Ship Canal. Around that time, he changed his name to Mike Robertson.

According to family-history documents that Kris shared, Mike liked the area enough that he bought 60 acres just west of the canal and built a home there, on Shiloh Road, in 1879. When a fire in 1891 destroyed that home, Mike bought another piece of property just north and across the road from the first homestead and fixed up an existing sheep barn to live in. That became the new Robertson homestead.

Now, five generations later, that same house is Skipp’s house. And just as the family home has changed through remodeling and expansion over the generations, so, too, has the farm around it.

The Robertsons started as dairy farmers, and the farm was called Stoney Acres. Kris said that his grandfather Roy planted the first cherry trees on the land in 1921. He continued planting cherry and apple trees, and, in 1947, the family sold its cattle. Today, the orchard produces many varieties of sweet cherries, as well as traditional Montmorency cherries, raspberries, currants, pears and apples.

Kris noted that about 75% of the trees in the orchard now are trees he planted when he ran Robertson Orchards. He said he made his own changes after he purchased the farm from his father in 1994.

“When I took it over,” Kris said, “I started doing the Green Bay farm market, and I started delivering to stores.”

Today that part of his legacy remains. Skipp still sells fruit at the Green Bay farmers market and wholesales to several stores in Green Bay. But he’s also focusing on the pick-your-own market more than his father did. It even provided an unexpected boon during his first season as the orchard’s owner, when COVID-19 drew many people to socially distanced, outdoor activities. Skipp talked about hosting people at the orchard for an experience rather than merely a sales transaction.

“People can come out here, enjoy a walk and just have an experience of a quiet, rural area,” Skipp said.

His earliest memories of the orchard are of picking deer apples and rocks. Although he spent several years away from Door County in the Army, he said he never really thought of doing anything other than running the orchard, and he feels a strong sense of responsibility to maintain Robertson Orchards as a family farm.

“If I didn’t do it, nobody else would,” he said. “I would be the person that broke the chain. The last thing I want is to see everything that’s been done over the last five generations be undone.”

Kris is officially retired, but he does a lot of the orchard maintenance and mowing. He said Skipp has learned what it takes to run the orchard on his own, and though they talk every few days, Kris doesn’t really give advice. Instead, he leaves his son to explore his own ideas and put the next generation’s mark on the farm.

“Robertson Orchards, I feel, is just an extension of me as a person,” Skipp said. “I just really like what I do.”