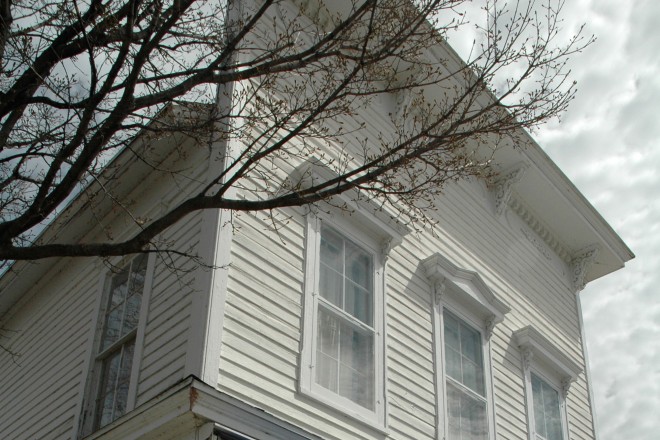 With the revitalization of Sturgeon Bay’s downtown area, Third Avenue is bustling with foot traffic through its shops and Jefferson Street has a full three blocks of antique, craft and specialty stores. And let’s face it, all of that shopping can make a person hungry! Off on the quiet end of Third Avenue there is a perfect solution to just that problem, the Bluefront Café.

Co-owners Susan Guthrie and her husband, Patrick Barbercheck, first met when they were both working at the Ritz Carlton in Chicago. Susan trained at a culinary school in France and Patrick was educated at the New England Culinary School in Vermont. They inevitably went on to other jobs, he at the Four Seasons, among others, and Susan at a small pastry shop called Bittersweet.

After a few more years in the busy Chicago restaurant race, Susan and Patrick decided to take a break from city life. The story is a familiar one from there. The two had visited Door County and liked what they saw. They relocated permanently to Sturgeon Bay and worked for various restaurants for about six years. Susan says that both she and Patrick had always talked about opening a small restaurant and they decided that Door County was where they should hang their chefs’ hats.

That was in October of 2002, and it was then that the Bluefront Café was born. Since the Bluefront was born three years after the birth of the couple’s son, Jacob, they decided to put family first, which meant closing everyday after lunch. Susan talks about the importance of quality of life, and as a two-time survivor of breast cancer, it is a concept that hits close to her heart.

Susan and Patrick looked at the needs of the area and realized that there was a niche for a casual, healthy restaurant. “We’d both done the fine dining thing,” Susan explains. “You can still use those skills and apply them to everyday food.” The creation of their menu was an easy one. “We started with things that we enjoyed eating.” Susan tends toward the ethnic vegetarian, which is showcased in their Mediterranean Wrap and Asian Wrap (which is also available with chicken). Patrick brings a Southern Californian upbringing to the table and when he came up with a fish taco special for lunch one day, it quickly became a staple on the permanent menu.

The sunny yellow walls and cozy interior welcome each visitor to this notable landmark building. The building itself was built in 1876 and is listed on the National Register of Historic Places. Over the years it has been home to many different companies. Susan tells that it twice housed a grocery store, one of which was named the Bluefront and, she says, “It just stuck.”

“Quality not quantity” is what Susan says about their space restrictions. “We realize that our space limits us.” There are only a handful of tables and seating is limited to say the least. The lack of space does not seem to bother the clientele and I can assure you, it has zero effect on the excellence of the food. A new “grab ‘n go” philosophy is driving the couple to make some changes to the menu—which they do on a bi-annual basis. They are focusing on creating items that are easy to, well, grab ‘n go.

The Bluefront’s menu has a wide variety of items for any hungry patron. There are the standard burgers and fries, soups and salads, and many healthful and vegetarian options. Side dishes vary every day. Sobu noodle salad, blue cheese with bacon potato salad and fresh fruit are just some of the examples. Susan says she wants “simple things done well” and they wanted to have fun with the menu.

Organic foods are used as often as possible. Organic flour is something that Susan has always used, dating back to her days as a pastry chef. Organic produce is desirable and local organic is the best of the best. Susan or her mother are often running to the farmer’s market to get whatever is available from local growers. Their desserts are always made from scratch and there are plenty of examples to choose from everyday.

Breakfast includes omelets, huevos rancheros, and organic multigrain pancakes with local Door County syrup. Another constant of the restaurant is their dried cherry granola, which is also available by the bag to take home.

With new housing developments and restaurants popping up all over the Sturgeon Bay area, offers have been made to the couple to move back into the hustle and bustle of fine dining but that would, of course, mean evenings and that is something that they are not willing to give up. It all comes back to the quality of life issue. Just as this couple wants to be hands on in the kitchen (with fewer than 10 full or part time employees), the importance of hands on parenting is just as valuable.

Looking out one of the two large picture windows at the Bluefront, you can’t help but notice one of those very large developments exploding right across the street. Condos, small homes and a marina may soon make the Bluefront’s small town, family atmosphere more like that of a downtown Chicago cafe. I have full confidence that the team of Susan-Patrick (and son) will handle whatever comes their way. “We enjoy what we are doing here,” says Susan. That feeling is made very obvious when you sit down to a meal at the Bluefront.