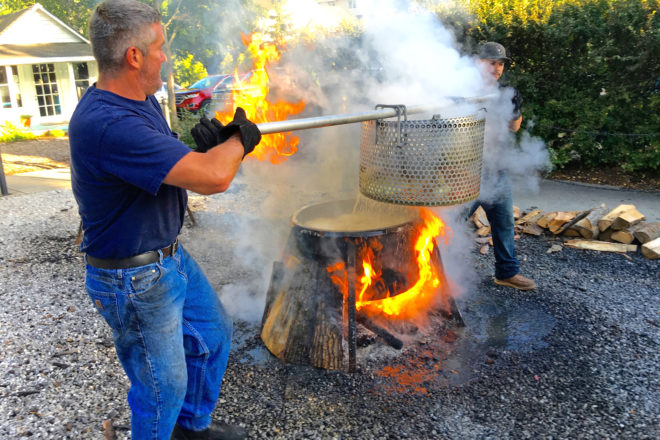 Matthew Peterson pulls the fish boil pot from the fire.

Autumn isn’t far away along this same Wisconsin shoreline where Bassmaster Elite Series pros like Jordan Lee, David Walker and Chris Zaldain finessed 18-pound limits of Smallmouth to the scales last September. And the only thing thicker than the black grime on Matthew Peterson’s Carhartt jeans is the grin on his face.

It’s a late summer Sunday night, the air is room temperature perfect with a hint of campfire smoke from under a 35-gallon pot of water, salt, fish, potatoes and onions that will soon be surrounded by an upward blaze of fire when Peterson throws a can of oil on the flame to burn off the fish oils on the kettle’s surface.

Just like Brett Favre once did at Lambeau Field 72 miles south of here, Peterson is a man who loves what he does despite working 15 hours a day to serve-up more than 200 pounds of Lake Michigan whitefish to patrons – ranging from Minnesota pipefitters in town for a chartered salmon trip, to retired folks from Michigan in pressed khakis – at Pelletier’s Restaurant in Fish Creek.

“My biggest passion is bow hunting, and I love to fish, too,” said Peterson, who actually shows a strong resemblance to Favre. “My buddies and I caught 16 salmon earlier this week, but I’ve been feeding people locally caught whitefish for 32 years, and there’s no doubt I love what I do,” he adds while sipping a Polka King Porter from Door County Brewing Company, just down the road in Baileys Harbor.

Fish boils are as much a part of Door County as cherries, smallmouth bass and celebrated sunsets…and for Peterson, a part of his soul. His grandfather was a fish boiler, and his father Dan is a boil master at the hugely popular Viking Grill nearby, so Matthew began throwing oil under flamed pots of whitefish when he was 18.

“This is my 32nd year of boiling fish for folks, but it’s a tradition that dates back more than 150 years to Scandinavian settlers who originated fish boils to feed lumberjacking families here in our local logging communities,” Peterson said. 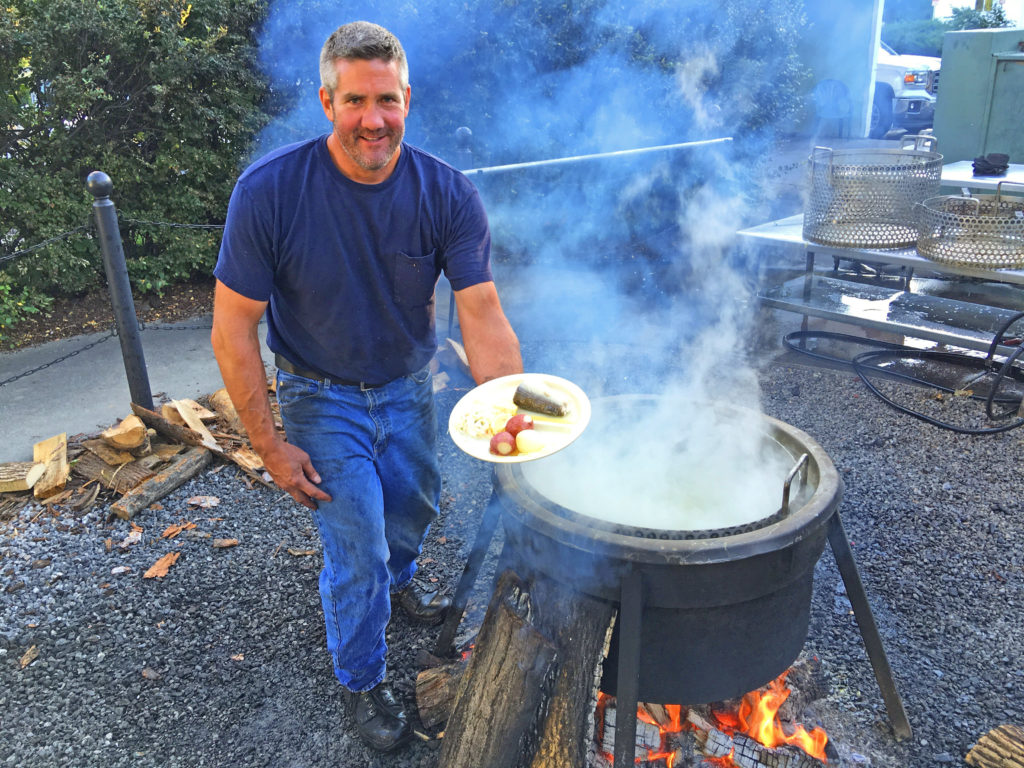 While some ice anglers target whitefish, open water anglers in search of salmon, smallmouth and walleye seldom seek them. And, man, does the region harbor smallmouth! Sturgeon Bay and Door County rank sky-high on Bassmaster’s Top 100 Lakes in America list, and Wired2Fish editors recently ranked the area No. 1 in their Top 15 Smallmouth Bass Lakes list.

“Whitefish have also had a positive role in keeping the zebra mussels and quagga mussels in check around here,” Peterson said in acknowledgement of his direct dependency on a healthy fishery.

For Peterson it’s simply home. It’s where he hunts whitetail, chases salmon with his buddies, shares 35 gallons of fish boiling passion with patrons 1,200 times a year. And ends each day in a pair of prideful grimy Carhartts with a grin on his face and a rewardingly refreshing local brew to end another 15-hour workday.

Alan McGuckin is a fishing industry public relations professional based in Tulsa, Okla. He provided this story to the Pulse “after a visit to this region I’ve grown to love.”