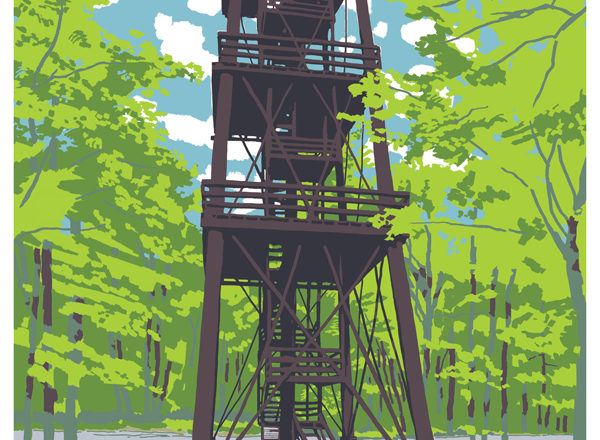 A bill relating to the repair of the Potawatomi State Park observation tower has moved forward, but an email from Gov. Tony Evers’ office indicates the project is mired in disagreement.

Rep. Joel Kitchens (R-Sturgeon Bay) sponsored the bill, which asks Evers to allocate up to $750,000 in federal American Rescue Plan Act (ARPA) funds to repair the tower. The 79-year-old structure has been closed to the public since December 2017, when the Wisconsin Department of Natural Resources (DNR) discovered significant wood decay that created unsafe conditions.

Sturgeon Bay resident Paul Anschutz testified during the Oct. 20 hearing before the Assembly Committee on Tourism, as did Sturgeon Bay resident Christie Weber, president of the Sturgeon Bay Historical Society Foundation (SBHSF); and Kelly Catarozoli, SBHSF board treasurer and owner of The Foxglove Inn in Sturgeon Bay. The SBHSF has been working toward repair of the tower since it closed.

“Preserving our history is so important, and also, the people in Door County generate a lot of money for the state,” Catarozoli said by phone after the hearing. “We’re bringing money in from all over the country and world. We deserve this [expenditure from the tourism].”

No DNR representatives attended the hearing.

“Normally, they would be there,” Kitchens said, and if not staff members, then their legislative liaison. “I think that was very deliberate. They didn’t want to answer any questions.”

Letters of support to fix the state park tower have come from every entity that has a stake in the structure, including the Town of Nasewaupee, City of Sturgeon Bay, County of Door, Door County Historical Society, Destination Door County and Friends of Potawatomi State Park.

“We have everybody,” Weber said, “and that should be considered.”

The bill will also likely make it to the Assembly floor this month for a vote. But if the Senate were to act on the companion bill – Kitchens isn’t convinced it will – and the bill ended up on Evers’ desk, he would surely veto it.

Zach Madden, legislative affairs director for Evers’ office, sent an email to Kitchens the day before the hearing indicating they did not believe they had an “immediately actionable project” at this time.

The disagreement over the project stems from three separate reports.

A visual inspection done in 2018 by the USDA’s Forest Products Laboratory found that repair was not viable and recommended the tower be demolished for $153,000.

The SBHSF hired Dan Tingley, senior engineer and wood technologist with Wood Research and Development, who specializes in restoring wooden structures. He concluded the structure could be fixed in place for less than $250,000.

The Department of Administration (DOA), in coordination with the DNR, then hired a third-party engineer to review Tingley’s work. Completed in January 2020, that report estimated that an in situ repair would cost $1.5 million.

Madden said they believe that third report raises concerns, questions and skepticism over Tingley’s proposed fixes. Therefore, “the pathway suggested by Dr. Tingley is not a viable option.” There’s also disagreement over whether the repairs rise to the level of requiring ADA accessibility. Tingley said they do not; the DNR and governor’s office disagree.

“If reopened, the DNR remains committed to ensure the tower is accessible and open to all visitors,” Madden wrote.

The Madden email also claims that the ARPA money cannot be used, and $750,000 is insufficient anyway. Neither, Madden wrote, would other funding sources from existing maintenance funds work. The only two viable funding streams, according to Madden, would be for the Legislature to pass a specific, unobligated stewardship enumeration, or for the Legislature to use money from the general fund, “because as you are well aware, the state has GPR funds available.”

“At this point in time,” Madden continued, “until the Legislature takes up one of the two prior options outlined above, the only other available option with an existing funding stream is the [former] Walker administration’s initial plan to remove the tower.”

The SBHSF and Kitchens disagree with the information Madden outlined in his letter as either contradictory, inaccurate or dead wrong. For one, the DOA-commissioned engineer did not review the tower as a historical structure and quoted a historic expert who said the “tower does not have the integrity and significance of a historic structure.” The tower was listed on the State Register of Historic Places in 2019 and on the National Register of Historic Places in 2020.

Additionally, they’ve been led throughout this year by DNR Commissioner Preston Cole, who challenged the group to get a Wisconsin-licensed engineer to stamp the conceptual plans drawn by Tingley for the tower’s repair. That happened in April of this year. Madden indicated in his email that they’ve been “unable to locate any document substantiating that claim.”

Cole also met with Kitchens, Sen. André Jacque (R-De Pere), Weber, Catarozoli and other stakeholders earlier this year, and he told them directly that the tower would be repaired.

Weber said the challenge to save the tower is similar to the one she successfully spearheaded to save Sturgeon Bay’s Michigan Street bridge from demolition.

“Their studies are inadequate, the direction is wrong and we need real leadership, like we had in the bridge issue,” Weber said. “The DOT [Department of Transportation] didn’t want to repair a bridge because they’d never repaired one before. They always went for federal funds and built a new one. The governor said, ‘Repair it,’ and they did. They [the DNR] need that direction.”

Despite the varying opinions on repair, historical significance and ADA accessibility, Madden concluded by saying the administration was “committed to finding a path forward” and would “reengage any stakeholders to solicit additional feedback on the path forward, given the challenges reported out and the lack of an immediately actionable project at this time.”