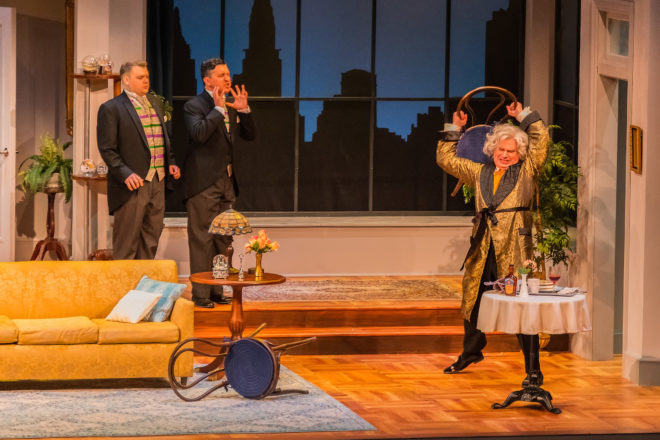 The latest production to grace the stage of Peninsula Players is an amusing comedy that entangles fame, romance and the trials of lasting marriage. On a stormy Sunday evening, my husband and I donned rain jackets and explored the shadowy gardens before following the glowing cafe lights into the beautiful open-air theater. As we sit, we are allowed to preview the stage setting: a glamorous penthouse, notably decorated with a collection of snowglobes. The lights dim and we are giddy to acquaint ourselves with Joe DePietro’s play.

The play, which debuted in 2015, takes an intimate look at the dramatic lives and marriage of fading opera diva, Raquel De Angelis, and waning Italian conductor, Vito De Angelis, or “the maestro.” Set in 1957, the two have lived their lives in their own spotlights, lavishing the luxurious lifestyle of traveling and aweing crowds. Yet, just back from her latest tour, Raquel realizes the audiences are slowly decreasing in numbers. At the same time, the maestro is allegedly hard at work writing his memoir with a ghostwriter, but we quickly learn that he is not a man that operates on anyone else’s schedule and his current assigned writer, Robert Samson, is near quitting. The couple is forced to face their slow fall from celebrity alongside dissipating funds, and hilarity ensues.

Living on Love’s cast of six also includes the De Angelis’ loyal butlers, Bruce and Eric, and a Junior Assistant Editor, Iris Peabody, who becomes ensnared in the memoir writing attempts. The strong personalities of Raquel and Vito are a whirlwind to watch; one minute Vito is yelling his latest opinion in Italian-peppered-English, the next Raquel is reenacting one of her famous opera roles, likely one portraying a virginal 16 year old. Iris and Robert are assigned to write the memoirs of each, but with the De Angelis’ dueling egos and jealous tendencies, they are in for a wild ride.

As the storyline progresses, we are granted glimpses into the lives of the two butlers who are clearly opera fans themselves. While they tend to the dining and decorating needs around the penthouse, the duo tends to breakout in song, adding a refreshing layer of pure musical entertainment that lightens the mood from the increasingly fervorous drama unfolding amongst the other characters. One of my favorite moments was when the pair performs an impassioned rendition of Eddie Cantor’s “Makin’ Whoopee” as they set the stage for a romantic dinner.

The twists and turns of the love stories at play evoke thrown silverware, snow globes and even a lingering scent of maple syrup. If it sounds a bit off-the-wall and kooky, you’re spot on. But the grander scheme of it all, which shines through at just the right moments, is the theme of love. Living on Love reminds us that when everything else has gone or fallen apart, you still have love to lean on.

Directed by Linda Fortunato you can see the play through Sept. 2 at Peninsula Players Theater in Fish Creek. Tickets are available online here>> 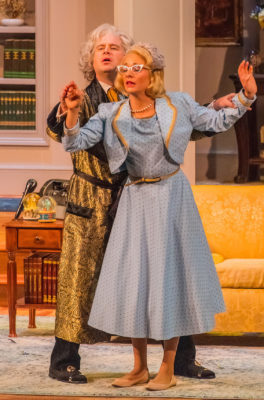