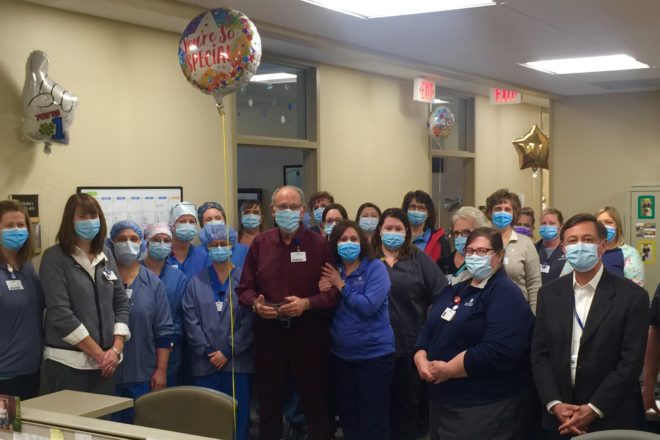 Dr. Richard Hecker is celebrated by colleagues at Door County Medical Center for his 50 years in health care. Submitted.

Dr. Richard Hecker could be retired right now. A few weeks ago, he celebrated his 50th year practicing medicine, having seen more than enough pairs of feet to call it a career. But he plans to keep going for at least a little while longer because he still gets satisfaction from helping people.

“If I can get a person to be able to walk comfortably, that keeps me motivated,” he said. “An 82- or 90-year-old patient comes in and has thick toenails or calluses, and I can give them comfort and keep them mobile, that’s a wonderful thing.”

Beyond helping patients to live a more active life, Hecker has been an inspiration to his colleagues.

“I have always been amazed by Dr. Hecker’s energy, commitment to his patients and zest for life,” said Dr. Michael Bruno, a colleague at Door County Medical Center. “Whenever I feel sorry for myself – being busy or lacking sleep – I try to think of him and step it up to his level. He has been a real inspiration to me.”

When Hecker started his career after attending the Illinois College of Podiatry, the field was seen as a fringe practice, disrespected by medical doctors, much as chiropractors once were. Practitioners were not recognized by hospitals or brought on staff.

“There were a lot of conflicts between orthopedics and podiatry,” Hecker said. “I don’t have that M.D. after my name. Without that, you aren’t handled or treated the same way. It was a political situation. Over the years, because of advancing board certifications and college programs, we have become more and more recognized. Now most podiatrists get involved in hospitals and medical groups right away.”

But that lack of respect was also, in part, what drew him to the profession. Hecker wanted to be involved on a larger level. With so much room to grow in his profession, he knew he could be a leader – and he has been. He has served as president of the American College of Foot and Ankle Surgeons, president of the American Board of Foot and Ankle Surgery, and chair of the Council of Podiatric Medical Certification. His work in those roles has helped to legitimize the practice through the development of board certifications and advanced curricula.

At the same time, Hecker also built a thriving practice in Milwaukee, earning a reputation as a great communicator with patients. One of his stated standards of care is to be a teacher of his patients.

“In my opinion, 50 percent of treating a patient is good communication,” he said. “Getting them aware of their options and what the alternatives are, and helping them choose the option that’s best for them. I try not to go into a room and tell them what to do. Patients need to take ownership in their health care, to do the cost analysis for their family and their personal situation.”

Hecker brought that approach to Door County Medical Center 16 years ago, at a time when he thought he would be winding down his duties. His connection to Door County began with putting a boat at Fish Creek’s Alibi Dock. That led to buying a home in Fish Creek, then eventually moving here full time. He began working at a free clinic for Door County Medical Center, but he was soon working three days a week as a member of the staff. Since then, he’s seen the hospital go through a transformation.

“When I first came here,” Hecker said, “the surgical arena was totally antiquated compared to the large institutions. A lot of people were going to Green Bay for their care. One of the best things they did was when they put the oncology center in. Then they put the women’s center in so they have their own delivery area. The reputation of this hospital today is just incredible.”

Those additions and expansions allow hundreds of patients to get treatment locally, rather than drive 60-90 minutes to Green Bay – a tremendous boost for a community with one of the largest geriatric populations in the state.

Hecker said he’ll finally inch toward retirement now as the hospital interviews candidates as a potential replacement, and then he’ll stick around to mentor the new hire for a couple of years.

But today he’s still inspired to help people, whether it’s a diabetic patient whose leg he can help save, or finding a life-changing solution for the teenager he saw recently who had been a toe walker, wearing five-inch heels to walk comfortably. Hecker was able to do a tendon-release procedure on the back of that patient’s legs so she could put her heels down to the floor.

“When someone like that can walk out smiling, that makes me feel pretty good,” Hecker said. “You can change their day, change their steps.”