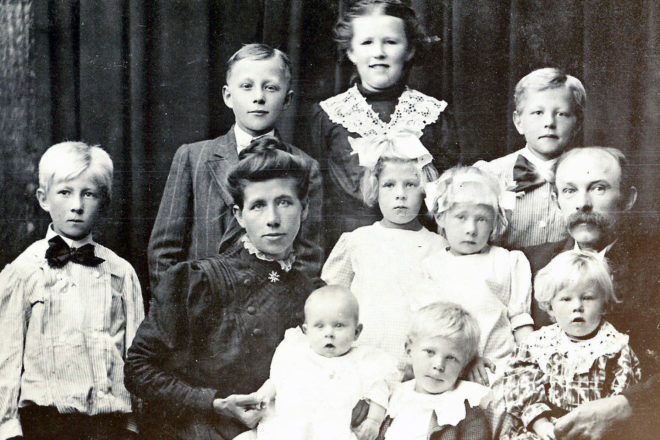 On Aug. 9, 1895, as Otto Peil was preparing to marry Hedwig Heinrich, his “mail-order bride” from Germany, his father told him that his right foot had to cross the threshold of the church ahead of Hedwig’s or she would forever have the upper hand and rule him for the rest of his life. The 20 direct descendants of the couple who were in the audience for Lynn Mattke’s presentation to the Baileys Harbor Historical Society, roared with laughter. Obviously, they knew that Hedwig’s foot beat Otto’s into the church and that her father-in-law’s prophecy was absolutely right. Hedwig Peil, like her friend, Emma Toft, was, indeed, a force to be reckoned with. 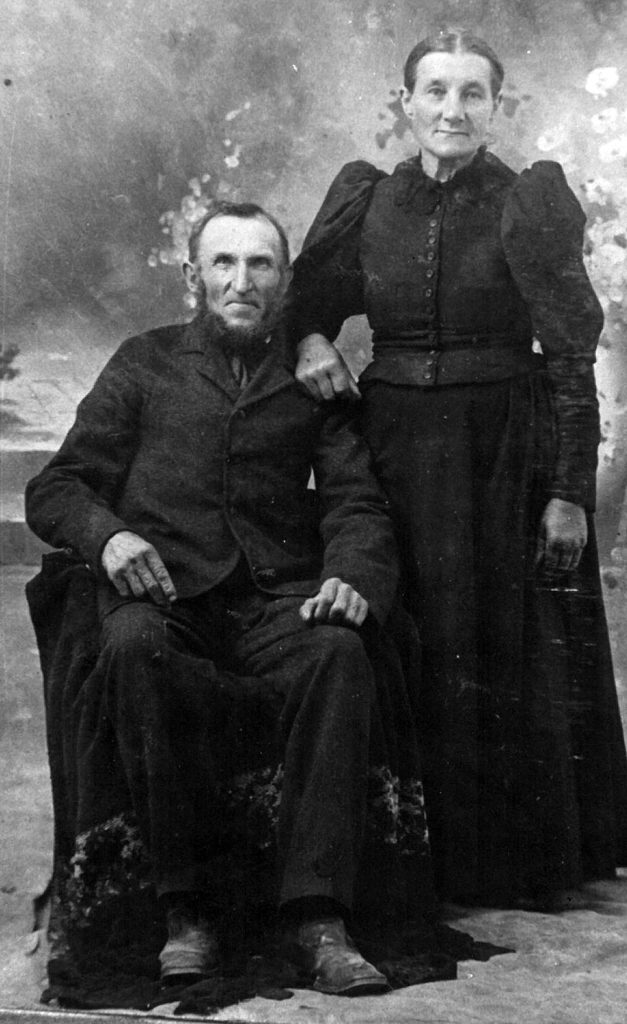 Karl and Augusta Peil (Vater and Mutter) in the early 1900s. Submitted.

The Peil dynasty in Door County began 145 years ago, when Karl and Augusta Peil and five of their children arrived from Germany. Five others had been stillborn or died in infancy, and two more were born in Baileys Harbor. Karl and Augusta began farming on 80 acres at the corner of county roads EE and F. As the boys grew old enough to take over the farm work, Karl turned his attention to planting trees along both sides of F. He had hoped to replicate the tree-shaded lanes of his village in Germany, but finding no linden trees available, he settled for the maples that prompted Emma Toft to write an essay calling them “one of the loveliest monuments any man could have.” Most of those maples are still there today.

When the oldest son, Otto, was 30, he took over the farm and was ready to find a wife. He turned for assistance to his friend Herr Jischke, who wrote a letter to a friend in Germany, asking if her granddaughter, Hedwig, would be interested in coming to “the land of opportunity.” Otto, he indicated, would pay the $60 fare and an extra $40 to reach Door County. Otto sent his photo, and Hedwig, who worked in her grandparents’ bakery and modeled in a dress shop, responded with one of herself, showing off her 36-22-36 figure. She had been a very bright student, of whom her teacher said that it was a pity she wasn’t a boy, so she could make something of herself.

The trip in steerage on the three-masted steamer, Scotia, took three weeks. Worried that her complexion had roughened from washing with saltwater, Hedwig was grateful for the captain’s offer of goose grease to restore it. Otto picked her up in Fish Creek with his horse and buggy.

There was no wedding photo because the photographer didn’t come to town until a year later. Otto and Hedwig were the second couple to be married at Immanuel Lutheran Church that Karl had been instrumental in organizing in 1895.

The couple hoped for children, but their first son died shortly after birth and the second child was stillborn. Told by a doctor that she would never carry a baby to full term, Hedwig was devastated. When she saw an ad for Peruna, a patent medicine that guaranteed a baby in every bottle, Otto agreed they should try it, even though it was expensive at $1 a bottle. Two years and 35 bottles later, Carl August was born, soon followed by Frieda Augusta. A few years later, they were featured in an advertisement for Atlas Flour. More babies followed – 10 in all in 14 years. 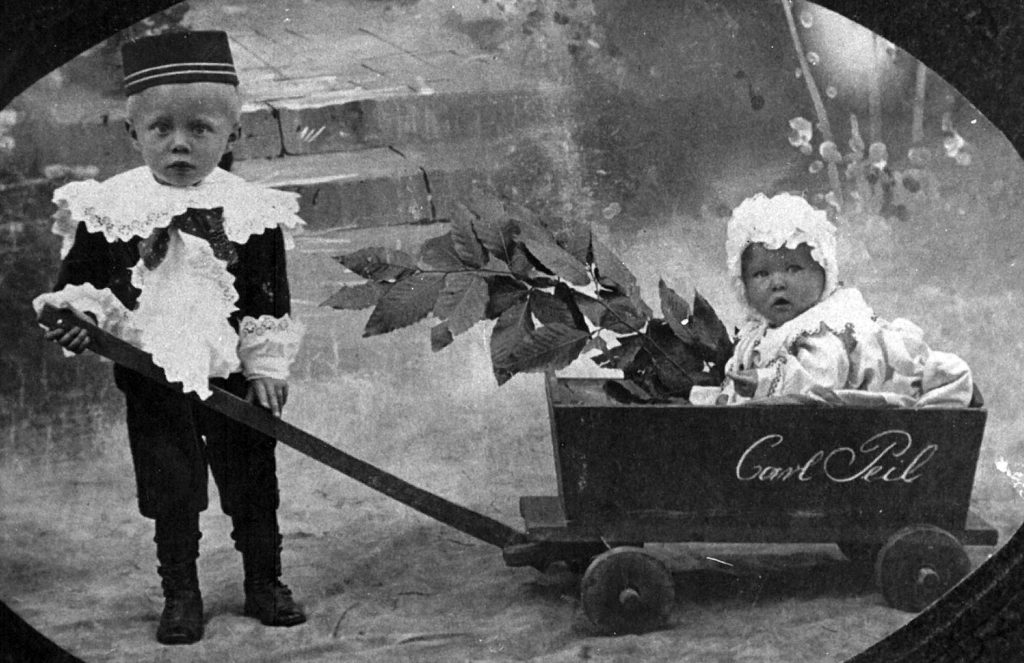 Carl and Frieda in a wagon built by Otto Peil. Submitted.

Hedwig did wallpapering for others to earn the money to bring Omla, her grandmother, to live with them, freeing Hedwig to pursue other opportunities. She became a midwife and delivered hundreds of babies, the largest Arnold Prueter, who weighed 12 pounds. She also decorated birthday and wedding cakes, a skill she learned in her grandparents’ bakery in Gros Wierau. She made cakes for the weddings of 10 of her grandchildren, two of whom were in the audience for the program. Another of her baking triumphs, much in demand, were phefferkuchen Christmas cookies.

She also made the bride’s and groom’s cakes for the wedding of Carl Vail, the son of Winifred Boynton, who built Björklunden. Winifred and Hedwig had become close friends, as Hedwig, a wonderful gardener, planted and nurtured Björklunden’s amazing flowerbeds. She also provided fresh flowers every week in season for the Lutheran church, carrying them in the children’s outgrown baby buggy.

Hedwig spoke no English until she learned with her children when they started school, but she was an astute businesswoman. She was especially determined to acquire property that would provide rental income. When five lots “below the bluff” were offered for sale at $60 each, she lobbied Otto to buy them for her, but he refused. She left, moved to Milwaukee and went to work in a kosher bakery. Lynn Mattke’s mother, Adeline Peil, left the seventh grade to care for her younger siblings. Missing her children after a few months, Hedwig returned home after Otto relented and purchased the lots. The rental cottage Henry Seiler built there is now the home of Everett and Lynn Mattke. Hedwig also paid $600 for the old town hall, when Michael McArdle gave money to build a new one. The old building was converted into tourist rooms.

A wonderful cook, Hedwig often invited the WWI veterans who attended the Art Colony on Frogtown Road to dinner at the farm and received many of their paintings as gifts. Her daughter, Adeline Peil Edmunds, related in her book, The Loving Spice of Life, that during the depression Hedwig routinely canned 700 quarts of fruits and vegetables and made 10 crocks of sauerkraut to feed the family during the winter. Farm animals were butchered and sealed in barrels with lard.

The original Peil homestead at the corner of county EE and F. Submitted photo.

A story Hedwig loved to tell in later life concerned a neighbor who came to her home, furiously waving a Sears catalog and the woman’s dress he had received instead of the mail-order bride he thought he had paid for.

Hedwig was thrilled to attend the Chicago World’s Fair in 1932 with Ivor Anderson and his wife, owners of the town laundry. She especially loved the garden exhibits and a visit to a fortuneteller who accurately told her how many children she had, how many would predecease her and that she would have a long life. In 1920, when the 19th Amendment was passed, Hedwig was excited to vote for the first time at age 49.

She died in 1962 at the age of 91, leaving eight children, 26 grandchildren and 41 great-grandchildren. Not to mention, as Mattke pointed out, all the Kalms, Anschutz, Gerdman, Tischler and Koepsel families with Peil blood. That long-ago teacher in Germany would surely have agreed that little Hedwig did, after all, make something of herself.