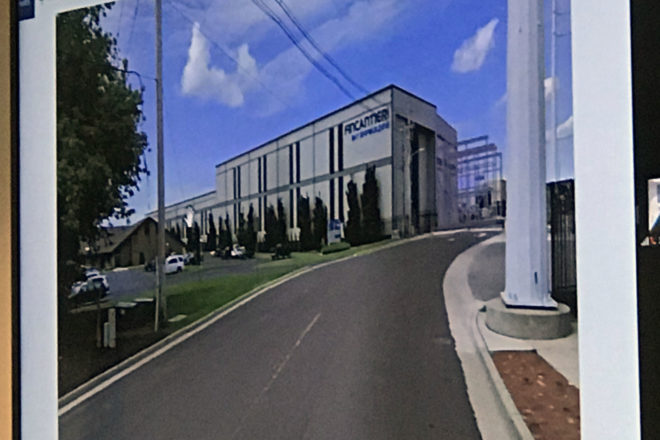 Fincantieri Bay Shipbuilding showed renderings of the new buildings as seen from the water and from Jefferson Street and 3rd Avenue during the Zoning Board of Appeals public hearings held Tuesday in Sturgeon Bay. Photo by D.A. Fitzgerald.

Fincantieri Bay Shipbuilding in Sturgeon Bay is preparing to upgrade its facilities at 605 N. 3rd Ave. in preparation for work on the U.S. Navy guided-missile frigate contract that was awarded to Fincantieri Marinette Marine in April.

The company secured variances Tuesday from the Sturgeon Bay Zoning Board of Appeals (ZBA) to encroach setbacks and exceed the maximum height of 45 feet in Sturgeon Bay’s Industrial 2 (heavy industrial) zone.

As a condition of the variance approvals, the ZBA requested that the shipyard provide to the city within six months a 3rd Avenue Improvement Plan that addresses items such as landscaping, employee parking, paving and enhancement of the existing vacant buildings. State and local codes pertaining to stormwater runoff must also be met, the board noted.

The improvements will be made within the current shipyard and will include constructing a new, 84,000-square-foot building in the southern lot that will be 110 feet tall. The shipyard’s gigantic gantry crane, known as Big Blue, is 166 feet tall.

The second project includes a 68,000-square-foot addition to the existing building off the dead end of North 1st Avenue, or roughly 3.5 times the building’s current size. This building will match the side-yard setback of five feet along the south lot line, as well as the existing building’s height of 59 feet. Steel processing will be done in that building.

These improvements will ready the south yard for what will be known as “our military area” in preparation for the shipbuilder’s role as a Department of Defense contractor, said Todd Thayse, vice president and general manager of Fincantieri Bay Shipbuilding in Sturgeon Bay.

Fincantieri Marinette Marine was awarded a $795 million contract in April for the Navy’s first in-class frigate, and the contract includes options for nine additional ships and services valued at $5.5 billion.

The Sturgeon Bay shipyard has historically done commercial work and will continue to do so, Thayse said.

The work that will be done in Sturgeon Bay will include building a substantial portion of the forward part of the Navy frigates. All the steel will come to Sturgeon Bay for components to be blasted, primed and shaped. Those parts will then be trucked or barged to Marinette Marine, which will finish and launch the vessels.

The Department of Defense has more oversight in regard to inspection processes and standards and material control, Thayse said. All the work, for example, must be done indoors to control the processes. The new, 110-foot-tall building will be used for module assembly. The building height was necessary to accommodate the crane needed to lift the heavy pieces.

The improvements, Thayse said, are “far north of a $30 million investment” for the shipyard.

Thayse said the company is not justifying the improvements with the addition of hundreds of jobs. Rather, he said, it “means a pile of continued jobs and good jobs moving forward.” The workforce fluctuates between 600 and 1,200 employees throughout the course of a year. Thayse said there’s a “very solid workforce” in northeast Wisconsin, and the contract will help the company to train the next generation of shipbuilders.

The three criteria that the ZBA members had to consider in their decision on the variance was unique hardship, unique property limitations and the protection of public interest. If the company didn’t secure the variances for the improvements, Thayse said, “I’d very much doubt we’d be able to meet the schedule.”

Construction on the buildings is expected to start in October and be completed in April 2021. Jim Stawicki, Sturgeon Bay Utilities general manager, said the shipbuilder’s utilities are “set up kind of like their own little city,” and the utility has ample capacity to handle the additional electrical, water and wastewater services.

The ZBA’s unanimous approval came at the end of a three-hour meeting that included public comment. Nine people – many who lived or owned businesses in the vicinity immediately surrounding the shipyard – spoke in opposition to allowing the variances, and three people spoke in support of the project. In addition, ZBA members received seven letters of support and five letters of opposition.

Some of those who opposed the project or expressed concerns about it said the variance criteria were not met.

Objections and concerns were also related to the size of the buildings, noise, lighting and decreased property and business values for surrounding residences and businesses.