“When she told me I started to cry,” said Helen Hecht, about when her coach Lauren Bremer told her she was named Packerland Volleyball Player of the Year for 2014. “It’s such a great honor and it shows how all my hard work paid off and all Bremer’s hard work as well.” 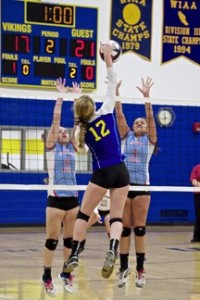 Hecht’s hard work is evident in her stats for the season, especially in the kill category. Overall this season Hecht, outside hitter, recorded 253 kills. This number puts her squarely as the leading hitter in Gibraltar’s volleyball program history; she also nearly led the conference with number of kills in conference play, 127. These numbers show vast improvement from her 2013 stats (189 overall and 86 in conference) and a reason her Player of the Year designation was almost a unanimous decision among conference coaches.

These numbers are surely an individual accomplishment, but they’re also an accomplishment for the team and the Gibraltar program.

Hecht said she was first introduced to volleyball by a Gibraltar volleyball alumna, “I had a babysitter named Ellen Diltz and she helped me with my serve.”

From there, Hecht perfected her play at the Sister Bay beach, various camps organized by the school, camps at UW – Madison, and playing summer league at the school.

“I had tryouts in freshmen year and was completely shocked I made varsity as a freshman,” said Hecht, who has been on varsity for four years, two as captain. 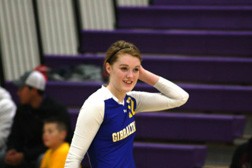 The proudest moments of this season for Hecht are characterized not by individual, but team accomplishments. She named two: “Beating Oconto the first game of the season and when we came back to beat Kewaunee in five…how we gelled together as a team and pulled it out…was so proud of what we worked for.”

Her father, Chris Hecht, had a different moment that was the most memorable for him this season. In a hard-fought game against Southern Door Hecht dislocated her facet joint and had to sit out for a weekend tournament. Chris said, “After Helen was out for a few games and came back, she started out slow and you could see she was tentative, you could watch as she gained her confidence, and by the end of the first set you could see how good she felt and how happy she was that she was back.”

Chris and his wife Liz were constants in the stands, watching and cheering on the Vikings. 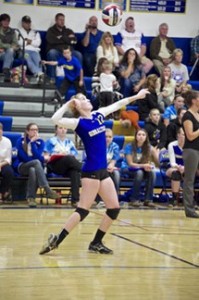 “My mom is a big motivator for me, but my dad is the greatest one,” said Hecht. “My dad is always the one I go and see after the games. Some of the times our parents are only fans…sometimes louder than our student section.”

[Often when the team was in a slump during a game hearing Chris’ characteristic cheer – “C’mon blue!” – was sometimes enough to rouse the team’s spirit.]

Next up for Hecht, after graduation in June, is college. She has aspirations to study pre-med with a focus on pediatrics, and is currently interested in St. Norbert College, University of Wisconsin – La Crosse and Lakeland College.

“I have to go to a school with good science and medical programs, but I do wish to play,” explains Hecht about her decision to prioritize academics over athletics.

If she doesn’t play in college, she’ll especially miss playing at Gibraltar and the feeling of playing with the team. She said, “Our dynamic on the floor is great. I’ll miss playing volleyball with them…I’m going to miss high school sports.”

Hecht shouldn’t lament too soon, she still has two more seasons – basketball and softball – to enjoy before graduation.