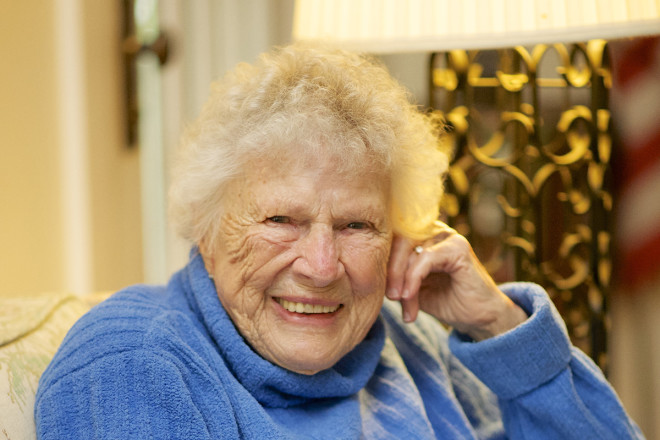 When Helen Schreiber Allen was born in 1922, her parents, Lester and Amanda Schreiber, owned and operated the Fish Creek General Store on Main Street, a mainstay in the village.

With a twinkle in her blue eyes, Helen’s memories flow like water over the smooth stones in the creek of her hometown. And it is the stories of simple days and simple pleasures that gave birth to Helen’s mission to preserve and share the history of Fish Creek. 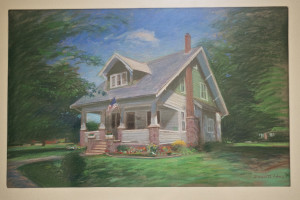 “There are so many lessons to be learned from our histories, no matter where we grew up,” Helen said. “It’s such a busy world now, so many distractions. But if we take the time to savor the memories and share the stories with the generations to come, maybe we can improve our world, even in a small way.”

And so Helen’s story begins…

“My parents bought the store in 1915 and sold all sorts of things…nails, tools, dry goods, fresh vegetables, pharmaceuticals, and fresh meat. When I was little, we had a huge vegetable garden behind the store [with vegetables] that we sold in the store. And my mother grew lovely flowers. My brother Bob and I took them over to the Thorp Cottages where we got five cents for a bouquet,” Helen recalled.

The Schreiber family lived above their mercantile store and that is where Helen was born. That same year, her father began building a new home around the corner.

“It was wonderful growing up in a small town. My great-grandparents Rachel Jarman and Stephen Norton (1857) were the first couple married in the Town of Gibraltar. He was a woodcutter for Asa Thorp, founder of Fish Creek. My grandfather, Edward Schreiber, drilled the well at Eagle Bluff Lighthouse and operated the Nook Hotel in town.”

And the stories continue to flow, one into the other, the names of people long gone intertwined like patches in a quilt.

“It was a different time, quieter,” Helen said in a soft voice. “It was surprising to see two or three cars on the road. We went to the beach every day, attended the two-room schoolhouse, and listened to Jack Armstrong on the radio. I love to think about that time.” 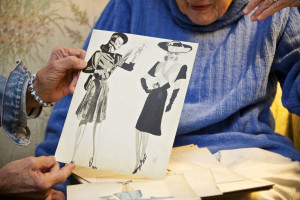 “One day it started to rain and the street car was late. I was wearing a dress I had made and the fabric shrank; I had to cut the dress off of me,” Helen recalled, smiling at the memory.

While attending school in Chicago, Helen met her future husband, Earle Allen, at the Fourth Presbyterian Church. Earle had enlisted in the military the day after Pearl Harbor; he was eventually sent to England where he worked with radar technology.

“When I first saw him, I thought ‘He looks kind of interesting,’” Helen recalled.

The couple was wed in 1946 at the Fish Creek Community Church. In the ensuing years, Earle and Helen lived in various Wisconsin cities, raising three sons and two daughters. Along the way, Helen returned to school, earning an Honors B.A. in History from the University of Wisconsin-Milwaukee.

“We usually visited three or four times a year when the children were young. It was always where my heart was and continues to be.” And in 1982, Helen followed her heart home. “Earle and I wanted to retire to Door County, and so we did,” she said simply.

After settling back home, Helen immersed herself in the local history.

“It was always a passion,” she said. “There are so many lessons to be learned from history.” And so Helen set out on a path that would circle Fish Creek countless times over…literally!

In 1983, the Gibraltar Historical Association (GHA) was founded by Virginia Kinsey, Ginka Cohn, Ann Thorp, Helen and her brother Ed. According to Helen, “Our immediate goal was saving the town hall from demolition; it was the cornerstone of our first efforts. Next, we began collecting and cataloging the township’s history.”

With her personal history of the village in her pocket, Helen next embarked on creating a historic walking tour of Fish Creek. With the help of her friend Ann Thorp, the tour included 24 sites. Sharing anecdotes of her youthful adventures and those of her childhood friends, Helen’s was a very personal walk down memory lane. The tour took a break with a pitcher of lemonade and homemade cookies on Helen’s front porch.

When she wasn’t guiding visitors through her village, Helen was walking its paths picking up litter and trash. She earned the nickname “the bag lady” for her efforts. When asked why she picked up garbage, Helen responded, “It may not be my trash, but it is my town.” 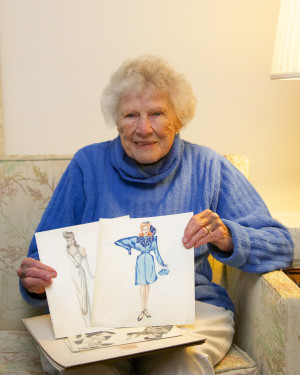 Helen Schreiber with fashion drawings at her Fish Creek home.

In 1990, GHA embarked on its next project: restoring the Alexander Noble House. Under Town of Gibraltar ownership, the building was leased to GHA whose membership once again set to work restoring the historic house.

“Within a few meetings, we were joined by Mary Stephens, Greg Peiper, and April Pate. We held spaghetti dinners in the summer and taffy apple sales in the fall. Chris Falck-Pedersen did all of the wallpapering.”

“Helen never takes credit for her contributions to our history,” said longtime friend Eunice Rutherford. “She always stayed in the background. Helen always loved her town and her family. She worked hard to do what she could to preserve our legacy.”

At age 93, Helen returns to Fish Creek and the front porch of her childhood home each summer from her winter residence in Arizona. Although she has retired from some of the more active roles she once had, Helen continues to find “life very interesting. Every summer someone will stop by and say ‘I remember you from my walking tours.’ It is wonderful to know people remember the stories I shared. That is very rewarding. Most of my friends are gone, but I have lots of younger friends who put up with me.”

Reception at The Craic

In celebration of the 25th anniversary of Helen’s first walking tour, GHA has created a new audio tour of Fish Creek. Following the blue number tiles on 23 historic buildings, visitors can follow in the footsteps of the village’s early settlers, merchants, fishermen and shipbuilders. Audio tour guide brochures are available at the GHA History Center.

An exhibition of 15 of Helen’s design drawings is currently on view at The Craic located in Founder’s Square, Fish Creek. A reception for her work will be held Sept. 15, 5 – 7 pm at The Craic. Stylish and artistic, the drawings demonstrate Helen’s talent.