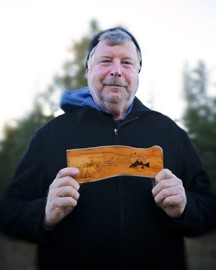 After spending eight years on the Wisconsin Invasive Species Council, Charlie Henriksen stepped down and was honored for his service at a special Dec. 4 ceremony. Photo by Len Villano.

As a commercial fisherman who relies on the lake to make his living, Charlie Henriksen made a good addition to the Wisconsin Invasive Species Council.

“One of the things I thought I contributed was to help them understand that this problem wasn’t going away,” Henriksen said.

The Wisconsin Invasive Species Council studies invasive species and recommends ways to control them. Henriksen was on the board since it began after 2004, but after serving eight years decided the council could use some new members with different expertise.

“I just thought it was time for some fresh blood, and I thought that what I had the ability to contribute had been exhausted,” Henriksen said. “I’m not as young as I used to be.”

The Wisconsin Invasive Species Council honored him for his years of service on Dec. 4 at Toft Point in Baileys Harbor.

“It’s pretty impressive when you think he drives all the way to Madison and attends council meetings, so we want to recognize his service,” said Paul Schumacher, council chairperson.

Henriksen isn’t a politician, and his experience dealing with invasive species with his business added a fresh perspective to the council, made up of both private individuals and public officials from state agencies.

“He’s a commercial fisherman, so he sees the effects of the invasive species,” Schumacher said. “He’s one of the affected industries.”

It was the introduction of the zebra mussel, a species of European mussel introduced in the ‘90s that eats phytoplankton and filters lake water, that recently changed the Lake Michigan fishery. It competes with native animals for food, and forced the whitefish to move farther off shore and spend less time in Moonlight Bay, Henriksen said.

The introduction of the quagga mussel, a similar invader that can live in deeper water, made the problem worse.

“When the zebra mussels started whitefish went deeper, so chubs went deeper,” Henriksen said. “Then quagga coated the whole lake bottom and stopped chubs from growing. Our chubs fishery in all of Lake Michigan changed in a matter of years.”

The chubs have gotten smaller, Henriksen said, because they have less to eat. He used to process chubs for two different companies and have four full-time employees working packing as much as 30,000 pounds in four months. Other local companies were doing at least that much.

“The chubs just stopped growing – boom,” Henriksen said. “[Chubs fishing] used to be one of the mainstays of the fishery and it extended all the way from Racine to Washington Island. It was a big, big thing and a tremendous amount of people went out of business because of that.”

Mussels aren’t the only foreign species to invade Wisconsin. Insects like the emerald ash borer and fish like the round goby have changed local ecosystems, too.

Henriksen said politics didn’t get in the way of writing invasive species rules, like they often do with environmental regulations.

While Henriksen may be stepping back from the council, he has faith that they will continue working to help promote awareness and education of invasive threats to native Wisconsin ecosystems.

“The people on the council from the science community were incredible in the work they did,” Henriksen said. “The thing really has legs.”