“It was pretty crazy.” That was Laura Seaquist’s summation of Aug. 5, a pie day to end all pie days at the Seaquist Orchard Farm Market.

It began as a sort of joke in 2007, when Laura’s mother, Kristin, bet the 10 ladies who routinely turn out 800 or so pies every Thursday that they’d never be able to make 1,000 in one day. “But if you ever do, she rashly promised, “we’ll all go on a cruise.” Laura and her sister-in-law, Heather Moore, stockpiled fillings and secretly made extra dough. 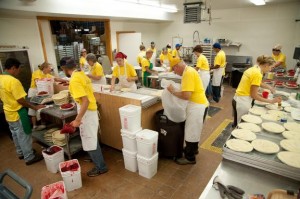 The pie day required a 23-person brigade to meet the challenge.

On the chosen Thursday, they surprised Kristin with a cake that said, “Gotcha Mom, when are we going?” and proceeded to turn out not 1,000, but 1,067 pies. Seven of the “pie ladies” cruised in the Caribbean the following spring.

This summer, there were jokes about the possibility of making 2,000 pies in one day. Kristin, the market manager, didn’t take it seriously, but Laura did. Throughout July, she monitored the contents of the huge freezer and realized that by Aug. 1 there would be room for the 20 racks needed to hold 2,000 pies.

She began hiding extra pallets of cherries in the freezer, the cooler and the warehouse. While Kristin attended a wedding and several meetings, Laura assembled a crew to work late at night making 94 trays of dough and 160 35-pound buckets of fillings.

“It took a lot of organization,” she says. “It was difficult to find people to help on Aug. 5 because this is the busy season for everyone up here.” But 23 helpers, including some of the workers from the Seaquist orchards showed up at 8:30 am, and the big day got underway. 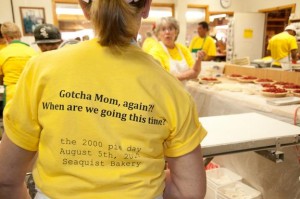 When the staff met the challenge of baking 1,000 pies in a day, momma Seaquist took the pie brigade on a cruise.

She continued, “We were able to keep Mom out of the kitchen while we changed the set-up from two assembly stations to four. When she finally came through the door, she saw 23 of us in bright yellow t-shirts with the wording, ‘Gotcha, Mom, again! Where are we going this time?’ and a cake with the same message. I guess she thought it was a joke, because after she got over the initial shock, she said, ‘OK, you can all go home now.’”

But that was not the plan. The assembly line flew into action. Kristin, as usual, manned the sheeter that turns the “loaves” of dough into long, thin sheets from which the individual pie crusts are cut. One worker cuts around a circular pattern for top crusts while others fit larger circles into pie pans. Another station weighs out the filling for each pie – cherry, apple, a cherry-apple combination or three-berry.

Next the pies go to the station where each one gets an egg wash that helps seal top and bottom crusts, and four mechanical crimpers apply the pattern around the edge of the pies that housewives used to take pleasure in creating with thumb and forefinger.

At the final station, the Seaquist “signature” of six little hand-cut hearts and a dusting of sugar are applied, then on to the freezer.

A total of 2,116 pies went through the assembly line. Nearly a half-ton of flour, 5,600 pounds of fruit, shortening and other ingredients were used in the seven-hour marathon.

Twenty-three pie makers might be too many to take on a cruise, but Laura knows that something special will be planned. A recent business and economics graduate of Wheaton College, she’s now the full-time bakery manager.

Is an even larger number of pies in the offing?

“Well,” Laura says. “I did check the freezer, and we could squeeze in 3,000, but I’m not sure that’s practical. We need space for other things, too.” In the meantime, those 2,116 special pies are waiting for buyers.

The Seaquist Orchards Farm Market, located at 11482 Highway 42, two miles north of Sister Bay, is open from 9 am – 6 pm most days from late May until Oct. 31. It has been owned by the Seaquist family since 1910.